Finally Home must be what Carina calls “sweet” and, in this case, that means–among other things–no sex. More’s the pity. It’s not I must have sex in my romances–although, in general, that’s my preference. It’s, if there isn’t sex, there’d better be something else compelling in the book: characters, plot, context, back story… something. This book had none of those things and I found it a chore to finish. The best thing I can say about it is that it’s error free and tells its story in a sensible manner. 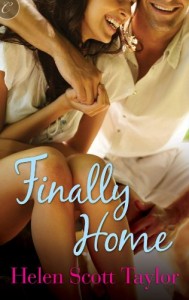 Melanie Marshall is the resolutely single manager of Greyfriar House Hotel. She’s so averse to intimacy she doesn’t speak to her parents, date, or have friends. Her life was ruined by her loser ex-husband (the build up to the reveal of what he did took way too long) and now keeps to herself, sure that’s best for her darling six-year old son Ryan. Her reasoning for keeping herself and her son so isolated from the emotional realm: her bad past–which is really her husband’s bad past–might catch up with them. Then poor little Ryan might hear mean gossip, and, natch, they’d have to move.  So much about this seemed perverse to me. One, apparently everyone in England is so meanly moralistic they blame a wife for the crimes of her spouse. Two, anyone who thinks the answer to raising a child is to shield said kid from all real relationships is poorly parenting. Three, smart heroines know running away over and over again doesn’t work.

But that’s Melanie. Melanie is hopeful, having run away from her last job and town, this job and town will work out and that no one will ever find out about her past. She’s worked for Greyfriar House for two months and thus far her past hasn’t caught up with her. Now, readers may wonder, as I did, who the hell hires someone today without checking them out on Google. In Finally Home, that would be Melanie’s gorgeous boss, Jack Summers. In Jack’s defense, he’s been busy alternately boning and being bossed around by his pushy fiancée–she uses her magic muff on him whenever he doesn’t see things her way. A day before their wedding, he realizes she’s not the woman for him. Rather than tell her this, however, he tells her he can’t marry her because–and he had to think of some excuse because he’s too spineless to tell her the truth–he’s in love with Melanie.

Jack returns back to Greyfriar feeling like a heel for putting Melanie in an awkward position–he doesn’t feel any pity at all for Stephanie; she’s the most powerful lawyer in town which makes her incapable of love or pain or something. Jack plans to tell Melanie as soon as possible but then he doesn’t and she finds out from Stephanie who, of course, threatens to tell everyone about Melanie and Jack. Melanie is terrified because, ready for it, such gossip might hurt her baby boy. When she confronts Jack about his lie, she begs him to silence Steph.

“You must go and set this straight with Ms. Curtis before she tells everyone. If people in this town spread nasty gossip about me, it’s bound to reach Ryan.” At the thought of her son’s brave little face, her chest tightened. He’d already suffered enough to last a lifetime.

Jack responds by trying to give her a hug.

Jack put his hands on her shoulders and squeezed. She stepped away from him. Jack Summers was not a sympathetic shoulder to cry on.

She hadn’t accepted the comfort of a man’s arms since her husband died five years ago. She couldn’t afford to lean on a man again and be disappointed. She needed to take a mental step back and be careful. She didn’t want to lose her job over this.

Jack, though, has decided what he really wants is Melanie to lean all over him. Somehow, saying–OK, lying–he loved Melanie has made him think he might. He decides to pursue her and is helped along by his–hey, another bitchy powerful woman–mother who threatens to have Melanie fired if she doesn’t marry Jack. (She really wants a grandchild.) Melanie just wants to be friends–friends being so much easier to ditch than lovers.

Poor Melanie, what will she do? Will she let down her defenses and let Jack care for her and Ryan? Will she agree to go to the Amalfi Coast with him for his pregnant cousin Pippa’s wedding. (Hint: yes but…)

purely because she wanted to visit Positano. The prospect of going with Jack had nothing to do with it. Melanie scanned his face, trying to fathom his intentions. So far, he’d abided by her wish to keep their relationship on a friendly footing. Could she trust him to be a gentleman if they went away together?

I could list all the reasons I disliked Melanie, Jack, the basis for their relationship, their non-combustible chemistry, and cute-as-a-button Ryan. But why bother?  DearAuthor readers can figure out for themselves whether they want to read Finally Home. I wish I hadn’t. I was happy when I was finally done. I give it a C-.