I struggled to pinpoint exactly why I didn’t respond well to this book. At first blush, I thought my problems lay with the derivative nature of the worldbuilding but in retrospect I think the real problem was the lack of romance although I did think the worldbuilding was uneven and often silly. 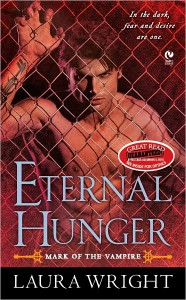 Alexander Roman is the eldest of three vampire brothers created when one of vampire women was forced to lie with a pureblood (be raped by a pureblood vampire or “Breeding Male”). These descendants of a Breeding Male go through a morpho around the third century mark, but the shadowy overseers of the vampire community hold enough power to force Alexander through the morpho one hundred years early.

As a morphed male, he could be a Breeding Male who would just go around raping and drinking from random women or a mated male who would be eaten with a hunger to find his true mate. Alexander would know his true mate when he sees the key, a tattoo of sorts that matches his own, on her body. This is probably the weakest point of the story because Alexander has this incredible lust and attraction for Sara Donahue (more on her later) yet doesn’t see a key on her body.

No!" Alexander snarled, his upper lip lifting, exposing his fangs. "No one touches her."

"You sure the hunger's eased, Alex?" Lucian said, his grin widening. "You're acting like an animal over a feed. Perhaps she has the vein you desire?"

Nostrils flared, Alexander stared at Lucian, ready to strike with either words or fists.

It was so patently obvious that this unnatural hunger for Sara and his protectiveness were signs of the fated mate bond but no one puts two and two together. Alexander and his brothers were actually pretty inept about everything.

Alexander does look for the mark either. Why would he, right? Even though he agnsts over the fact that she can never be his, he never once undertakes a looksee around her person to see if his mate key is hiding even though he discusses the marks with another woman:

Alexander lifted his chin, showed off the brands on his cheeks. "You see my mark?"

"And you have this mark on your skin?"

Her eyes dimmed, just a hair. In fact, if Alexander hadn't been studying her so closely, he never would have noticed the chink in her confidence. "I haven't found it yet. But that means nothing. As you know, veanas can develop their marks later, or sometimes the mark is so hidden-‘ "

Sara Donahue is a renowned psychologist who studies PTSD and memory pain. She works at an institute where she keeps a secret patient, the reason for her studies. If word gets out about her ties to the patient, her research will be tainted and her career will be doomed. Sara’s research gets pushed to the wayside because one special skill of Alexander’s is memory removal. Ta da. Who needs research and science when you have magic. Very little of Sara’s skill as a researcher or doctor is evidenced in this book. The setup is a nice idea, but it’s not well integrated into the story. Sara’s role turns from tireless researcher to lover of Alexander.

Alexander’s conflict is that he doesn’t believe in the true mate thing, despite all evidence to the contrary, and so he refuses to take blood from Sara and have sex with her. Then when the urge to mate with her becomes too strong for him to resist, he has sex with her but refuses to take blood from her because it could turn her into something corrupt. I never once felt like there was an impossibility keeping the two apart and I blame this on the silliness of the world building and the fact that Alexander and his brothers clearly lacked the mental capacity to see beyond their toes. What do I mean by silliness?

The all powerful Order that controls the vamps can morph a vampire 100 years before his time and physically dematerialize him from one plane and bring him to another. Yet, in order to get Alexander’s attention, they write words on the wall? And despite this constant show of power, Alexander plays the belligerent hood in front of them?

In a crowded paranormal field, this one failed to stand out for me. C-

There was one line in the book that made me laugh out loud, literally:

I AM WHAT YOU THINK I AM.

This reminded me so forcibly of the Dennis Green meltdown that I had to stop reading the book: