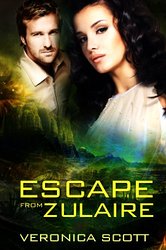 Andi Markriss hasn’t exactly enjoyed being the houseguest of the planetary high-lord, but her company sent her to represent them at a political wedding. When hotshot Sectors Special Forces Captain Tom Deverane barges in on the night of the biggest social event of the summer, Andi isn’t about to offend her high-ranking host on Deverane’s say-so—no matter how sexy he is, or how much he believes they need to leave now.

Deverane was thinking about how to spend his retirement bonus when HQ assigned him one last mission: rescue a civilian woman stranded on a planet on the verge of civil war. Someone has pulled some serious strings to get her plucked out of the hot zone. Deverane’s never met anyone so hard-headed—or so appealing. Suddenly his mission to protect this one woman has become more than just mere orders.

That mission proves more dangerous than he expected when rebel fighters attack the village and raze it to the ground. Deverane escapes with Andi, and on their hazardous journey through the wilderness, Andi finds herself fighting her uncomfortable attraction to the gallant and courageous captain. But Deverane’s not the type to settle down, and running for one’s life doesn’t leave much time for romance.

Then Andi is captured by the rebel fighters, but Deverane has discovered that Zulaire’s so-called civil war is part of a terrifying alien race’s attempt to subjugate the entire Sector. If he pushes on to the capitol Andi will die. Deverane must decide whether to save the woman he loves, or sacrifice her to save Zulaire.

I bought this short novel when I purchased “Wreck of the Nebula Dream.”” Set in the same “Sectors” universe, I was looking forward to it since I’d mostly enjoyed the first book in the series. Well, by the time I was finished, I felt as if I’d read – no, make that skimmed – my way through the same book.

Once again we have a ragtag band of survivors fighting their way through a world turned topsy turvy. Andi is the heroine who can be annoying in her insistence on saving everyone and following the hero into dangerous situations yet she does assist more than be TSTL and usually manages to save people who will aid in the escape or be important later. Deverane is the tough military, no nonsense hero who insists on sticking to his mission in the face of Andi’s above actions only to cave in 2 minutes later to her demands yet he does have a heart and is a good leader of his men. I will say that the world building was well done and seemed to stay within the laid out boundaries.

Once again there is a small child in tow, an emotionally wounded female character, an alien with woo-woo powers, wild eyed, fanatical villains, and a few other military men who will be handy in the numerous fights along the way. The heroine is a businesswoman and the hero has a childhood history of loss and was orphaned after a planetary military invasion. Oh, and there’s the threat of a truly awful enemy alien race to contend with. One change is that this time the action is on a war torn planet instead of a disabled space craft.

Once again, there is an alien with mental powers to ease traumatic memories, strange-to-us alien rituals which can heal illness and injuries and deus-ex-machinA just-in-the-nick-of-time oh-by-the-way escapes from seeming death. The hero gets physically incapacitated for a short while requiring the heroine to help save him during which time she falls for him. The romance gets wedged into all this with a few moments of melting desire and you’re-having-sex now?! moments.

Tensions are heightened! Emotions flare! We must save them! I’m going with you! Desperate measures are taken! We don’t have time for your damn regulations! OMG! We can’t! We must! Damn it, just do it! Our lives and the planet hang in the balance!

If I hadn’t read “Nebula Dream” two months ago, I’m sure I would have enjoyed this book more. I wouldn’t have skimmed so much. The similarities wouldn’t have jumped out as much. But I did read that book, the similarities conked me on the head and felt I was reading it again. I probably won’t be continuing on with the next book. C-

→ Jayne
Previous article: REVIEW: Loving Maddie from A to Z by Kelly Jamieson
Next Post: Tuesday News: Advice from the Authors Guild; the state of scientific research; movie, tv, and book adaptations