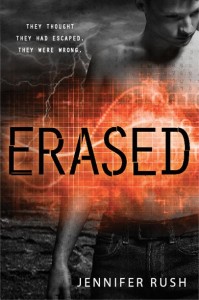 While your debut, Altered, left me underwhelmed, the fast-paced action of the plot stuck with me. I wanted to see if the second book improved. Sometimes it takes a book or two for a series to find its legs. (Hey, I started out a fantasy reader. Believe me, I know about series that take a while to get going!) So I picked up Erased with those hopes in mind. Maybe they were misplaced.

After the events of Altered, Anna and the boys — Sam, Nick and Cas — remain on the run from the Branch, the organization that made the boys into super soldiers and Anna into their control switch. But the time away from the Branch has had other results. Without the drugs constantly pumped into their system, old memories are resurfacing — memories that were once suppressed.

Anna struggles to make sense of her memories, trying to put together the pieces in a way that makes sense. Then she discovers that her beloved sister, Dani, may still be alive. Every sign points to a trap set by the Branch, but the truth may be even more surprising.

Much like Altered, Erased is action-packed and zips along at a fast pace. Because of this, it’s a quick read but once the last page is turned, the flaws come tumbling out one after another. This is a novel with lots of flash but not much substance.

First of all, Erased deals with lots of heavy topics: identity, suppressed memories (whether by natural means or no), estranged family members, and abuse. But not enough time is given to these subjects and I can’t help but think that’s to the novel’s detriment. Maybe it’s the length of the novel. I don’t know if you can balance these themes and the plot and do them both justice in less than 300 pages.

Secondly, I’m forced to admit that Anna is a very reactive character. I don’t know if this is a holdover from the Hunger Games school of “strong” female protagonists but from page 1, Anna is reacting. Every decision she makes is in reaction to an event that happens. For a protagonist, she doesn’t really control her own fate, even in a small way. You don’t notice this immediately while reading the novel — or at least I didn’t — but having finished the book, I’m left feeling distinctly unsatisfied.

Some of the problems from Altered carried over. I’m still not entirely comfortable with the fact that Anna and Sam are in a relationship, when Sam was once in love with her older sister, Dani. Yes, the same older sister who returns in this book. While I’m relieved there are no awkward love triangles in Erased, I still think that aspect should have had more impact on the present-day relationships. Sure, everyone’s memories have been tampered with in some way but still, wouldn’t you feel awkward when you were reunited with the sister you lost… who also used to date your current boyfriend? I’m sorry. Anna is a teenager. There’s no way a simple conversation can put all those worries to rest.

I’m also disappointed by the relationship between the sisters. Yes, they’ve been estranged and yes, Anna’s memories have been altered and gaps are missing but this is a sister practically come back from the dead. Shouldn’t there be more impact? It just seemed underdeveloped and lots of missed opportunities abounded. In many ways, I wondered if Dani even needed to be Anna’s big sister. She could have been a best friend based on the ways that part of their relationship affected the plot and its implications.

Finally, the romance between Anna and Sam bored me. I know it’s hard to keep an established relationship interesting. That’s why so many awkward love triangles get introduced after the couple has gotten together. This isn’t me saying I want that. The opposite, actually! But Anna and Sam are on the run. Anna is learning survival skills and Sam is the perfect soldier-assassin. Shouldn’t there have been some friction in their relationship under this conditions? That’s a lot of stress!

Ironically, I found myself wanting Anna to get together with another character (Nick). Their dynamic is more interesting and after some revelations in Erased, I’d almost say them getting together makes more sense. Or maybe that’s just my favorite tropes affecting my judgment. (I’ll refrain from saying more because that’d be a spoiler.)

While I’d hoped for some interesting developments in the second book of this series, I realize now those expectations were misplaced. If you enjoyed Altered, I suspect you’ll like this book. But if you were left dissatisfied by the previous book, I wouldn’t bother picking this up. It’s more of the same. C-