REVIEW: Embrace of the Damned by Anya Bast

I have long been a fan of your books, particularly your Elemental Witches series. I find that your voice lends itself well to building paranormal worlds, and I’ve always appreciated your ability to build a fascinating mythology while never losing sight of the main couple’s romance. Which is why I was disconcerted to find myself struggling with your new book, Embrace of the Damned.

A damned Viking warrior.
Centuries ago Broder Calderson committed murder. As punishment, he was given over to the dominion of Loki, the Trickster God, made part of the Brotherhood of the Damned and condemned to an immortal life of battle against the Blight, blood-drinkers from Hel.

A mysterious woman he can’t resist.
One thousand years to the day he was damned, Loki allows him a woman as reward for his good service and repentance of his crimes. Once Broder sees Jessamine Hamilton, he is overcome with need. But Jessa is no ordinary woman, and the truth of who—and what—she is could have dangerous consequences.

A tormented man she can’t deny.
Though a future together is impossible, the warrior’s touch ignites an irresistible passion in Jessa. But every heated kiss pushes them closer to destruction. Forced to return to the brutality of his Viking past to protect her, will Broder surrender forever to his darkest impulses? 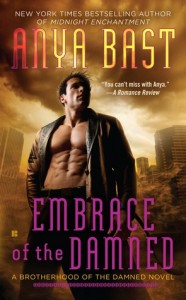 Jessamine Hamilton is shocked to find herself attacked one night while on a clandestine visit to the City Clerk’s office. While walking through a parking lot, she finds herself chased and cornered by what could only be described as a demon. Just as she thinks her life is about to end, the demon is destroyed by a hulking man, who stabs the demon causing it to turn to disintegrate into ice. This man is Broder Calderson, and he is a member of the Brotherhood of the Damned. A thousand years ago, Broder committed a crime so atrocious; he was damned to eternal service to the Norse god, Loki. During his servitude, Broder feels nothing. He has not been with a woman in a thousand years, and has lived for a promise made by Loki, that once he’s completed a thousand years of service, he will be given a woman as a reward. Little does Broder know when he rescues Jessa that she is that woman. He knows she’s in danger, and isn’t quite sure why the Blight (demons) would be after her.

Jessa has lost the only family she’s ever known, and has been manifesting strange abilities, particularly an affinity to electrical equipment. She can make any broken piece of electrical equipment work again. She’s always been an outsider who yearned to part of something, but was never able to connect with those around her. So when naturally, when Broder rescues her, she’s suspicious. When he tells her that she will surely die if she goes back to her previous life, she’s infuriated. Sure, she’s grateful that he saved her, but she wants no part of this new and terrifying world she has been exposed to. For his part, Broder is miserable. He’s desperately attracted to Jessa and wants her with a single-minded desperation, but she pushes him away constantly. Once he kisses her, he can taste that Jessa is a witch. The reasons why she was taken away from her clan is a mystery, and Broder believes returning her to that family before she is ready to fight for herself would be a huge mistake. He takes Jessa to his home in Europe and arranges for her training. The longer they are around each other, the more the connection between them grows. But Jessa realizes that she will be leaving Broder soon, and is very reluctant to begin any kind of involvement with him knowing that soon she’ll be joining her family.

On paper, this book is exactly the sort of paranormal romance I enjoy. I love alpha heroes, and deeply appreciate smart heroines. Where this book fell down for me was in the execution. The external conflict worked for me, and I quite enjoyed the fact that Norse gods, whom we don’t see much of in paranormal romance, were used as the foundation for the world building. Unfortunately, I found that there were a number of strands that were never picked up on, particularly Jessa’s ability with electrical equipment. While there were a few throw away scenes where Jessa’s ability came into play, unless I’m missing something, it was never utilized as a tool to propel the story forward. This felt like a wasted opportunity.

Another missed opportunity for me was the connection between the hero and heroine. While I’m all for sexual tension, and many of my favorite romances feature heavy doses of it, this book felt to me like the heroine was a bit of a tease. With every encounter she would go farther and farther with the hero, only to pull back at the final moment. This didn’t feel like sexual tension so much as a power play on her part. I never really understood her motivation for pulling back. The result for me was a belief that the heroine was childish and immature, which of course made me wish that Broder would move on without getting involved with her.

My final gripe with the book was the deus ex machina employed at the end of the book. I really hate stories where a magic wand is waved to give the couple their happily ever after. In this case, I felt like a character that really had no role in the book other than backstory “saved” the relationship. While I understood why you did it, it felt too easy for me. Particularly for a couple whose connection I didn’t completely buy in the first place.

All of that being said, I am intrigued by the world, and there is quite a bit of sequel bait here. I found your use of the Norse gods fresh and new, and enough to make me want more. Given that I am a long time reader of yours, I will continue with the series in the hopes that the next book will work better for me. Embrace of the Damned gets a C- from me.