I am a big fan of your writing and even when you announced the move into mystical realism, I was undeterred in my fandom. Yes, the magical realism was so light as to be unnecessary in the previous work and yes it wasn’t well integrated into the story but I enjoyed the characters and the romance and the tension between the two that I overlooked the magical realism. In Dream Lake, however, the paranormal element is so overpowering and inseparable that it nearly ruined the story for me. Ruined is a harsh word but the ghostly element pervaded every corner of the book like insidious smell of smoke that permeates items not even singed in a fire. No corner is safe. 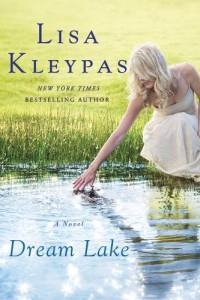 The story opens with the ghost point of view. I don’t know who the ghost is and I don’t care. I don’t care because he isn’t corporeal and never will be. I don’t care if he haunts the house or goes on to a better life. But I can’t escape him. He narrates the first four chapters.  Half the time I’m not even sure if he is narrating anymore or whether it is some unembodied omniscient voice. For example, as we are told the entire backstory of the Nolan family and how they came to live at the house that the ghost was supposedly tied to until he was then sucked into Alex’s sphere and couldn’t escape.

His voice is maudlin and predictable. Worse, he is ghost ex machina. When Sam and Alex, two brothers, get testy with each other rather than allowing the reader to infer for herself the chill in the air, the ghost spells it out “The ghost was perplexed by an unfamiliar sensation, a raw chill that would have caused him to shiver if he’d had a human form. It was a depth of despair that even th ghost, in his bleak solitude, had never experienced — and it radiated from Alex Nolan.”

and later “Although he hadn’t been able to read Alex’s thoughts as he had sat on the front porch, the ghost had felt them.” The transition from Alex’s point of view to the ghost’s point of view was often confusing making me wonder at times who was narrating the story.   The ghost wavers from old-fashioned mores and language to a snarky modern tone of voice.  The ghost is one half smart-aleck and the other half wise sage, serving whatever purpose Alex needs at the time whether it is appropriate responses in courting Lucy or attempting to get through an alcoholic haze.  “Part of you is dying, the Part of you that drinks to avoid pain But avoid pain only feeds it.” Wax On, Wax off

Moving on from the ghost are the two other main characters: Alex the drunk and Zoe the chef.  (Zoe’s magic is in the restorative power of her food).

Despite my aforementioned complaints, there are examples of good dialogue throughout the book.  Alex has a troubled relationship with his brothers and it is not easily resolved.  The other brothers are too wrapped up in their own lives and really don’t make much effort in saving Alex, not that Alex would want their help.  “If your life were graphed in a pie chart, half of it would be ‘shitface’ and the other half would be ‘hungover‘” says his brother Sam.

The middle of the story was more palatable. I breathed a sigh of relief when the story switch to Zoe’s point of view because it was ghostless. But I felt like she got the short shrift. Abandoned by her father, Zoe’s main family was her grandmother.  The grandmother was suffering from early onset dementia. Very little of Zoe’s inevitable grief at losing her only family was shown to us.  The one  scene with her father was painful for every one but her. Zoe wasn’t particularly interesting despite her marvelous cooking skills. I would have loved to try her oatmeal, described as almost like an oatmeal cake with warm milk poured around it.  The food that she makes for Alex every morning sound like a culinary marvel.  But Zoe as a person lacked backbone.  For instance, she has an ex husband who married her, cheated on her with a man, and then left her.  He comes running back to her for comfort after the man he left her for breaks up with him.   She easily forgives him, comforts him.

Alex’s alcoholism was healed through drying out and Zoe’s magical cooking but I never felt invested.  Rather than drawing us closer to Alex and feeling his pain, I felt the ghost narrated version of this story distanced us from the characters. We were seeing his recovery primarily through a third party rather than the character’s point of view.  I’m still on board for more of these books. I can only hope that there are no more ghosts.  The set up for the next book appears to be between a Billionaire and a witch.  C-