I’ve made no secret of the fact that I love post-apocalyptic and dystopian novels. Your sophomore effort falls into the second category. It’s good timing since we’re in the middle of a post-apocalyptic/dystopian wave in the YA genre, courtesy of the Hunger Games. 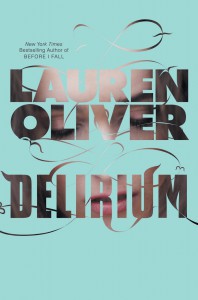 In the future dystopian world of Delirium, love has been ruled a disease and outlawed. People are cured of this terrible affliction and predisposition at the age of 18 via partial lobotomy. Cured individuals then go on to live pleasant unremarkable lives. They marry someone chosen from a list of appropriate, potential partners provided to them by the government. They have the appropriate number of children, a number that is again determined by the government.

Adults who remain uncured are called Invalids and are cast out from society. For that reason, cured adults and their as-yet-uncured children must carry appropriate identification with them at all times. The government often conducts raids on people’s homes. Everyone has to be indoors before a certain hour because there is a government-imposed curfew. All legal entertainment is government approved and like everything else, it is merely pleasant.

Lena Haloway comes from a family with an unfortunate history. Despite four attempts, her mother remained uncured. She then went on to kill herself because of love. In addition, some of her relatives were Sympathizers, people who don’t believe in the cure and think that Invalids shouldn’t be ostracized from society. Both scandals left a huge stigma on her family. So much so that Lena is under a lot of pressure to do well during her evaluation — when government officials interview her in preparation for the cure and for mapping the rest of her pleasant, cured life. Because of her family history, it’s very important for Lena to get a high score.

Unfortunately, Lena cracks under the pressure and the evaluation goes badly. Lucky for her, however, the evaluation was interrupted by a herd of cows being released into the facility. Due to this incident, her evaluation is invalidated, giving her a second chance. But because this is a novel in which love is outlawed, it should surprise exactly no one that Lena meets a boy and falls in love.

First of all, I like the idea of a society where love has been ruled a disease and outlawed for fear of contagion and widespread infection. I thought there was a lot of potential in it. But some of the explanations attached to it within the novel strained believability for me. In this world, love has been deemed responsible for a number of physical ailments such as heart disease, insomnia, and hypertension as well mental ones like depression, bipolar disorder, and anxiety. I know a great deal remains unknown about the body and its various systems but we know enough that it’s hard to me to suspend disbelief and buy that love causes people’s arteries to clog up and for people to have strokes. On the other hand, I suppose it is believable that a partial lobotomy will fix a number of mental disorders seeing as the procedure was used to do exactly just that in the early 20th century.

I also thought it was interesting to see how Christian mythos was warped and twisted to support this society’s views on love. It was a good reflection of current events and how holy texts are often used to support a number of extremist, radical actions.

The main problem I have with this book — and it is a big one — is the romance. No, it was not a surprise that Lena would meet and fall in love with a boy. With this kind of premise, that’s a foregone conclusion. Nor was it a surprise that the love interest in question would be the guy she sees on the observation deck when the cows are invading the evaluation center. A mysterious boy that Lena knows nothing about? Of course he would be the love interest.

The last point is a big sticking point for me. Lena grew up in the shadow of a mother who not only committed suicide but failed to be cured four times. She has relatives who were known Sympathizers and that stigma has stuck with their family ever since. She grew up looking forward to the procedure, to a safe and pleasant life laid out to her by the government. She hated the idea of love, feared any sign of its taint, and was very careful never to take any risks at all. For her to suddenly do a complete about-face and go against all that without any sign of true internal struggle or dissonance just did not ring true to me. Every time Lena went to do something against the rules (like sneaking out to go to an illegal concert), a little flag went up in my head. It did not fit at all with the character we’d been presented with.

Maybe we were supposed to believe that meeting Alex and finding love made her reckless and not at all like herself. In fact, I think that is exactly what we, as readers, are meant to take away. But as I said, I found the romance bland and going through the motions of what we’ve come to expect to see in YA romance. It didn’t help that I found Alex completely boring and uninteresting. He is the love interest simply because he is the narrative’s deemed love interest, not because there is any chemistry between Lena and him. He is the hot guy because he is the mysterious guy, not because of a fully fleshed out personality. (Although there’s also the distinct possibility Lena found him attractive because he was the first boy she’d ever met and interacted with, since uncured minors are gender-segregated for fear of the love contagion. I’m just saying.)

There’s also a surprising lack of detail about this dystopian world’s history. What made people rule love a disease? Why would people believe that? Even more to the point, why would people flock in droves to get partial lobotomies? I realize this is a government-controlled society so there’s no doubt been a great deal of “tampering” with historical archives and records but the lack of information made it even harder for me to buy the concept.

I don’t know if Delirium is a standalone novel or part of a series. It’s probably the latter since there were a couple plot threads left unresolved. But at this point, I don’t really care. There’s no pull for me to keep reading. If I was meant to have a huge epiphany at the end of the book, it never came. Much like the cured individuals that populated the book, Delirium plodded on at a nice, pleasant pace — no narrative lows, but no narrative highs ever. I somehow think this wasn’t deliberate. Oh, and a word of caution to diehard romance readers: despite this being mostly a YA romance using dystopian trappings, the ending is pure dystopian. C-

→ Jia
Previous article: REVIEW: The Seduction of His Wife by Tiffany Clare
Next Post: Tuesday Midday Links: Is Apple headed for a showdown with Amazon?