This book wasn’t badly written and it was plenty sexy but I found the hero to be overbearing douchebag for the first third of the book and the heroine was a complete coward in the last quarter. I didn’t really like either of them enough to feel invested in the story. I felt the emotional relationship between the heroine and her sous chef/grill master/head line cook was deeper and resonated more strongly than the romance she had with the hero. I ended up feeling sorry for the douchebag and wished the heroine had more balls. or stronger ovaries. 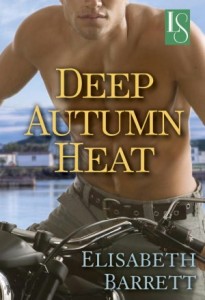 Sebastian Grayson is a celebrity chef with a popular Manhattan restaurant and a new tv show. He’s scouting Boston for a location for a new restaurant but has taken time to visit his four brothers in Star Harbor. Lexie Meyers is the owner of the LM Kitchen and has been for a few years. It is the go to place for breakfast and lunch in Star Harbor. Lexie is renowned for her pastries.

When his brothers take Seb to the local eatery, his very first words to Lexie are “‘Do you know who I am?’ he asked.” This pretty much sets the stage for Seb’s interaction with Lexie for the first 2/3 of the book. Seb is the man and he isn’t afraid to throw his weight around. Perhaps this is exactly how a big celebrity chef acts, but as a main character in a romance, it is totally off putting. It’s one thing to create a difficult character that we learn to enjoy or at least appreciate against our will, but I felt like I was supposed to find everything Seb did beyond sexy like when he gave Lexie the full once over while she was trying to take his order.

He demands that she allow him to watch her work. After much badgering she acquiesces but when she decides she’s had enough of him staring at her ass and disrupting her kitchen, he challenges her to a cook off. When she tries to beg off, he insults her “What’s the matter?” he smirked. “Afraid you’ll lose?.” and “Big talk, but I haven’t seen too much action here,” he goaded, gesturing toward her two line cooks. “You have other people doing your dirty work.” It was a deliberate provocation and she knew he knew it.

When she replies that she is a very competent chef and works her butt off, he diminishes her even more by making another suggestive remark, “And what a fine butt it is,” he said”. What is Lexie’s response? Oh nothing really because he kisses her senseless. La di da. So much for standing up for yourself Lexie.

There are a dozen reasons Lexie might not want to have a cook off with Seb and she shouldn’t have to do this just to get him to leave her alone. Worse, when she doesn’t immediately set up a time, he comes into her restaurant during lunchtime service and demands she set a date for their challenge. Then when the challenge occurs, he brings his camera crew. Not telling her any of this before hand.

Further endearing us to Sebastian is showing us that he’s a selfish bastard, willing to pursue someone who he instinctively knows is not interested in a fling but he has no self control or decency.

Seb groaned. That settled it. He wanted her, consequences be damned. He’d figure out a way to deal with the aftermath later. Who knows? Maybe she’d be the one to call it off

He also enjoys making suggestive comments to her while she is serving her elderly customers in this very small town.

“You know what for,” he pressed. “As I recall, you told me you wanted satisfaction.

One of the elderly ladies at the table gasped. Seb gave her one of his dirtiest grins. “That’s right,” he continued, turning back to Lexie. “Complete and utter satisfaction.”

Lexie began to turn a dull shade of red. To her credit, she ignored the whispered insinuations that were now wending their way through the room. “I’m working right now. Come back later,” she managed to grind out through clenched teeth.

The scene in the restaurant escalates and Lexie feels humiliated.

“Not until you agree to make arrangements with me,” he insisted.

What would Sebastian do in the reverse, if Lexie came into his restaurant during lunch service and embarrassed him for her own advancement. I really don’t need to provide more examples of Sebastian’s douchebaggery, right? Let’s turn to Lexie. For the first two thirds of the book, I felt terrible for Lexie because Seb was such a failure.

But my sympathy for Lexie took a sharp turn toward the latter part of the book. She was so passive. She never stood up for herself. She was always in need and thank goodness one of the Grayson brothers was there to kindly help the gentle woman out. Example of passivity:

He had called her several times—unfortunately at odd hours due to his intense schedule—but she hadn’t picked up.

“So, has my brother called you?” Cole asked.

“He has, but I haven’t had time to pick up,” Lexie answered honestly.

“But he hasn’t followed up? Emailed? Told you he’s coming back to visit?”

Cole muttered something mostly unintelligible, which sounded suspiciously like a very dirty phrase. Lexie put her hand on his arm to stop him from walking. “Cole, it’s okay. We had a good time while he was here, and I don’t regret anything. He has his own life in New York, and that’s all there is to it.”

Cole looked down at her. “My brother,” he bit out, “is very, very stupid.”

Lexie smiled ruefully. “Thanks, Cole. I appreciate hearing that.”

This is called faux conflict. Rather than the two of them struggling with a long distance relationship, we have one party playing hard to get blaming the other party for not calling enough, not emailing, not communicating. What the hell, chick? Just answer one of the damn phone calls.

The best parts of the story were when the four brothers were interacting but those few episodes weren’t sufficient to sustain my interest in this book. When Seb wasn’t acting like a douchecanoe, he and Lexie’s romance about two people from seemingly polar opposite places in life had potential.

There is a suspense plot involving threats to Lexie’s safety including ominous notes, vandalism, and physical violence and in order to make the whodunit a mystery, the suspense element branches off into many different directions. It did not, however, result in any real surprise because the conclusions to the mysteries seemed limp and left the reader with more questions than resolutions. C-

→ Jane
Previous article: Thursday News: Is the serial revival around the corner? Or a gimmick with a limited life span?
Next Post: REVIEW: Bared to You by Sylvia Day