I love stories that feature relationships between female relatives, especially sisters and cousins close in age. I also love the idea of an all-female secret society that controls the world from the shadows. So when I saw that your novel combined the two, I snatched it up with excitement. Unfortunately, I discovered that might have been premature. 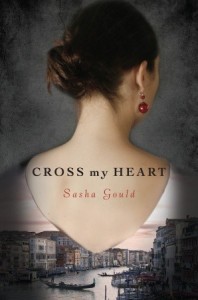 Laura della Scala is the younger of two sisters. Because her overambitious father didn’t want to pay two dowries when it came time for his daughters to marry, she was sent to the convent. Then one day, she’s taken from the convent by her father without explanation. Though confused, she’s excited by the news. At last she can be reunited with her beloved sister, Beatrice.

But it’s not to be. Upon arriving home, she learns the truth. Beatrice drowned under mysterious circumstances. Everyone claims it was an accident but Laura doesn’t buy it. Beatrice was a strong swimmer so the chances of her drowning in a Venetian canal are low. Worse yet, to cement his social status, Laura’s father intends to have her take Beatrice’s place and marry her fiancé, Vincenzo. Laura is fine with the idea until she meets Vicenzo. Instead of the handsome, nice man she pictured, she discovers he’s a disagreeable, old lecher.

Laura will do anything to get out of the marriage. She gets her chance when she’s contacted by the Segreta, a mysterious group of women who pull the strings of Venetian society. In exchange for their help, they only ask a secret in return. But once Laura’s inducted into their ranks, she discovers everything has a price. And more importantly, the person responsible for her sister’s death is closer than she thinks.

I initially had a lot of sympathy for Laura. She lost her beloved sister. She’s treated like a pawn by her father – shunted off to the convent when she’s not necessary and then yanked back when she is. She has to marry a creepy old man. For the past few years she’s lived in a convent and as a result doesn’t understand the ins and outs of Venetian society. I even can excuse her assuming that Beatrice’s fiancé was a kind, handsome one. That’s the romantic fantasy of an immature girl kept in the dark. This set-up is geared to stir sympathy.

But when given the opportunity to escape that marriage, the Segreta make very clear what the terms of their helping her are. If she wants their help, she has to join them. And if she wants to join them, she must offer up a precious (political) secret. Laura does this.

So why does she expect them not to make good on their agreement? After she’s free of Vincenzo, she tells them she wants nothing to do with them. Anyone with brains knows how well that’s going to go over. As this behavior continues on throughout the book, my sympathy for her began to erode. I can understand not being savvy in political intrigue – she spent a few years sequestered in a convent — but there comes a point when a self-preservation instinct must kick in. That never happened.

I thought that as the book continued, the plot began to ravel. Instead of many storylines woven together, we hopped from one subplot to another. There’s the Segreta. There’s her sister’s murder. There’s her romance with a young artist. If the transitions between one plotline to the next had been smoother, it probably would have been fine. But it seemed like we jumped from one to another at random moments, as if that specific storyline had been forgotten until that very moment. Because of this, it read choppy and disjointed.

While I loved the idea of a teenage girl trying to find her sister’s killer, I was disappointed to discover there were few positive relationships between women in this book. Laura obviously had a deep bond with her sister, and she was also close to her maid. Other than that? She’s at odds with the Segreta as a whole and the specific women who make up the group. Her relationship with the two friends are superficial and catty. I especially disliked how the climax hinged on a woman backstabbing another woman for a guy. Really? This book has a premise that hinges on female relationships, so why does Laura not have any?

And then there’s the romance with the young artist. I admit I was bored by it and when another subplot emerged in the second half of the book, his true identity became painfully obvious. This was also true of the killer’s identity. And once I figured out who killed Beatrice, I just wanted the book to be over.

Based on the premise and ideas, I can tell there’s a great story somewhere in this book. The potential is high. But the execution just didn’t work for me. Despite the prominent mention of the Segreta, they didn’t play a major role at all and that left me feeling cheated. The various subplots didn’t come together strongly enough. And the ending was so neat and pat, there might as well have been a bow tied around it. C-