REVIEW: Cowboy Take Me Away by Kathleen Eagle

“When photographer Skyler Quinn first fixed her lens on gorgeous cowboy Trace Wolf Track, she liked what she saw but didn’t give it much thought. Until everywhere she went—the rodeo, the Double D Wild Horse Sanctuary—there he was, and the heat between them built to the boiling point.

As a widow struggling with debts and loyalties from a former life, Skyler needed to stay focused, especially if she wanted to achieve her dream of becoming a mother. Was Trace a fatal distraction, a mere summer fling? Or did this younger man—so deep, so passionate—hold the key to a future that would make all her dreams come true?” 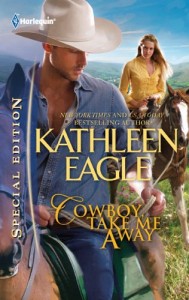 I just love the Dixie Chicks song which shares the title of this book. Romance, romance with cowboys, visions of beautiful western scenery with cowboys, yep I just love this song. And I was enjoying this book for most of the story until it moved towards the end and rushed to a conclusion.

The book starts slowly and gently – flowing naturally along. I’m enjoying the smooth easy style and the view of cowboys – the real thing and not cowboy wannabes. Trace is a slow talking, charming man with courtly manners who knows what he wants and what he wants is Skylar Quinn. Though he is thrown for a loop when he discovers that she’s a fellow cowboy’s mother – well, make that stepmother. I like that Trace isn’t some bullet proof bronc rider. He’s had his share of less than eight second rides and has got the aches and pains to prove it. He’s still in the money but is old enough to be thinking of what he’s going to do next.

Skylar Quinn is an older woman, 37 years old and the younger widow of an older man. Her marriage wasn’t all she wanted but it was okay. Now she’s looking for something for herself. Like Trace she knows what she wants and isn’t afraid to go after it. If it only turns out to be a few days, okay. She’ll enjoy it however long the ride lasts. I like that you avoided the cliche of the horrible first marriage or of a widow swearing never to risk her heart by loving like that again. At first I was almost as thrown as Trace about the fact that Skylar is stepmother to a young man already on the rodeo circuit but came to like their friendship and obvious affection for each other.

At this point I need to point out that since I usually enjoy your books so much, I bought this one without even having read the back blurb. The cowboy cover and your name were enough. So bear with me as I explain why the last part of the book surprised me. And not in a good way.

When their relationship moves to the physical, I immediately noticed the lack of a condom. But the first time wasn’t planned so I could deal with it. Trace expresses concern though Skylar is blase. The second time this happened I was as surprised as Trace at what Skylar announces. This isn’t the kind of thing to spring on someone basking in the afterglow. Plus, with the exception of one nonchalant throw-away line about children earlier in the story, I noticed no foreshadowing of Skylar’s possible intentions – well aside from the blurb I didn’t read. Most of the story has been focused on her growing photography business and plans to train a wild horse for the Wild Horse Sanctuary training competition but from the book up til then, I caught no hints at all that Skylar wanted to be a mother.

Also by this time, Skylar has learned something about Trace’s background as the son of a runaway mother who got lucky in the man she married before she took off for parts unknown. Logan Wolf Track stepped up as an honorable man who did right by his stepsons. If Skylar had thought for a moment, maybe she would have made the connection that Trace would never want to be just a sperm donor – it’s not the way he was raised. Even without his specific background issues, I will admit to being astounded that Skylar appears to think it’s no big deal to make some man a father without his having any say so in the matter. True after the initial shock, Trace doesn’t seem that averse but still, I think Skylar should have announced her intentions before their second – and planned – lovemaking.

So after a few days of horse training, these two go their separate ways for weeks. Trace has urged Skylar for more and admits he wants them to stay together and see where things go but Skylar demures saying she has things she must do. They separate amicably with an exchange of phone numbers and then suddenly, with no additional contact, Trace shows up, hat in hand to propose forever. This is way to quick here. I couldn’t help but feel that parts of this story got nixed on the chopping block of word count.

Though this is part of a series, I think it stands alone as a solo read just fine. The characters from previous books who make appearances do so to further this story and to give hints about what’s going on for them. I didn’t feel as if I had missed out or was being overloaded with ghosts from books past.

It just seems that the last 1/3 of the book is too rushed with shortcuts taken in the telling. I really thought I’d end up liking it completely as a laconic cowboy western but mixed signals on Skylar’s intentions and too quick wrap up of the romance take away from what started to well. C-