REVIEW: Come to Me Quietly by A.L. Jackson 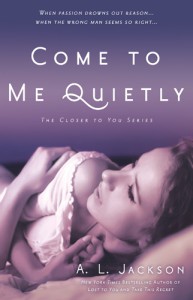 One of my biggest guilty pleasure tropes is the one where the little sister gets together with the older brother’s best friend. So when I read the cover copy for Come to Me Quietly, I picked up your book without a second thought. I eat that stuff up with a spoon. But while it certainly delivered in that respect, I’m not sure it delivered much else.

Aly goes to college and works in a diner. She lives in an apartment she shares with her older brother, Christopher. It’s an easy, comfortable life. That changes when her brother’s best friend, Jared, comes back to town. With no place to stay, Christopher offers Jared their couch as a place to crash.

Aly has been in love with Jared since forever. When they were younger, she used to be the older boys’ shadow. Christopher reacted to this about as well as you’d expect a young boy would when it came to his tagalong kid sister. But Jared always defended her and took care of her. Then tragedy struck his family, sending Jared into a self-destructive tailspin that eventually drove him out of town. Aly never thought she’d ever see him again so she has every intention of taking advantage of this chance she’s been given.

I don’t know if it’s because I’ve been exposed to lots of over the top or extremely angsty new adult novels, but I found Come to Me Quietly a little dull. Despite a promising beginning, it lacked intensity overall and as the novel progressed, what intensity there was dropped noticeably. Maybe another reader who’s tired of angst and melodrama would find this appealing. For me, though, it made the book seem longer than it actually was.

Part of it is the conflict. When I read a straight up contemporary with no other genre elements (suspense, mystery, thriller, etc), I actually expect the inherent conflict to be stronger because there are no external plot elements (a killer, a stalker) to mask that weakness. Here, the main conflicts are Jared coming to grip with his tragic past and Aly and Jared hiding their relationship from Aly’s brother.

For the latter, this worked initially but increasingly failed for me the further along I read. Eventually I reached the point where I wanted to shake these characters and say, “Just tell him already!” Secret relationships can work as a trope, but the execution here made me wish they would just have a conversation with Christopher. Sure, they’re awkward. Sure, they’re hard. But isn’t that part of becoming an adult in your 20s? Learning how to have those difficult conversations? Instead there’s a lot of creeping around and Jared sneaking into Aly’s bedroom (while her brother was often present in the apartment, might I note). It became repetitive and tedious.

As for the other conflict, the terrible thing that happened in Jared’s past is built up in a series of flashbacks interspersed throughout the novel. This is a tricky narrative device to use effectively and one that ultimately hinders the story here, I think. By the time the Bad Thing is revealed, readers will probably have figured it out already (or at least the gist of it) so the unveiling loses some impact. I do think there are some stories where the reader is meant to figure out the truth so that when the big reveal happens, it’s parsed as inevitable and yes, of course. But I didn’t get that impression here at all.

While Come to Me Quietly had some potential, the novel didn’t quite live up to those expectations. To top things off the ending is trite and speaking for myself, failed to deliver the emotional catharsis I look for in books like this. The fact that there’s apparently another book that continues the story of Aly and Jared (Why? What else is there to write about?) just dims my enthusiasm more. C-

→ Jia
Previous article: AUTHOR REVIEW: Nice to Come Home To by Rebecca Flowers
Next Post: Making the Move from iPhone to Android by Angela James (and Jane’s shocking conversion)