As you know, I really enjoyed The Perfect Play. I love football and I felt like the story captured elements of the athlete hero fairly well.  It was scorching hot and had a believable love story with a great heroine.  I knew from hints within The Perfect Play and by the included excerpt that the next book would feature Gavin and his agent, Elizabeth. 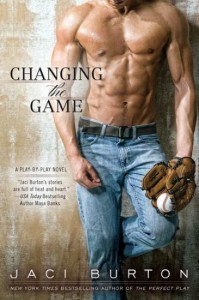 When I first read this book, I put it down and skimmed to the end but then I felt like I should finish it for a review because I had reviewed and recommended the first in the series.  My initial problem was the set up.  Gavin is a baseball player in St. Louis.  Liz is his agent.  They decide that they are going to sleep together, not a friends-with-benefits sort of thing, but just “fucking each other brainless until one of us gets tired of the other.”

Gavin is a professional athlete, a rich and good-looking athlete.  He could have more chicks on his stick in one night than he could service in a month.  So why Elizabeth, who, as Gavin describes in the beginning of the book:

Even if Liz had messed with Mick’s personal life, had hurt Mick’s girlfriend and her son, and had done just about everything humanly possible to piss his brother off.

Would a brother who has hot chicks throwing themselves at him constantly really go out of his way to pursue a woman who decked his brother over in a bad way? I understand that part of the conflict was that Gavin, the middle brother, struggled with feelings of inadequacy compared to his saintly older brother Mick, but I didn’t see that as the reason behind Gavin’s pursuit of Elizabeth. His pursuit was that she was hot and available — their initial connections shallow. If you are going to have shallow connections, why with someone who had the potential to impair an important relationship (the one with his brother?)

Further, Gavin and Liz were supposedly friends and Gavin thought Liz was one of the best agents around.  There is no discussion or thought about what sleeping together would do to that relationship.  For adults, both Gavin and Liz seemed to be so lust driven as to not be capable of rational thought.  This wasn’t appealing and made both of them, primarily Gavin look immature.  Liz had crushed on Gavin secretly for a long time so her falling into his bed was more believable.

As this is a romance, the feelings change overtime although Gavin really grappled with the concept of falling in love.  I’m not sure why.  Gavin grew up with two parents that loved each other.  It wasn’t as if Gavin appeared in the book that he wanted more time to screw a different chick in every town.  Instead, he wanted Liz and thus his animosity toward the idea of coupledom that grew in the later stages of the book and then his resulting cruelty toward Liz wasn’t understandable.

I will say that I grew to like Liz quite a bit.  She was a control freak and that was what made her so good at her job.  Obviously she had boundary and ethical issues. I wasn’t quite sure that the ethical issues were ever addressed. She was sorry that she hurt Mick and lost him as a client.  Was she changed? I wasn’t convinced of that.  I like that Liz was a great agent, making her way in a man’s sport. I understood that she had to be tough but there were some points where I wish she had been presented as more consistent.  Early on in the story, when Gavin and Liz first start sleeping together, he literally demands to know how long it has been for her since her last lover.  Two years, Liz confesses and Gavin was then appeased. But why? Why should he be appeased with her two year abstinence? Would he have wanted her less if she had just dumped a lover 2 months ago?

I didn’t enjoy how the story progressed forward, either, with Gavin being emotionally stunned by his father’s illness. Gavin sits out of baseball, during the season, and I just found that really implausible.   I had read this book before the NBA finals this year, but this implausible position was hammered home even more when the story of Mike Miller. Miller’s new daughter was born during the playoffs and had a hole in her heart. He played his games well, but would be flying back to his daughter’s bedside.  There is multiplicity of stories like this in sports.  While this was a minor point in the overall story, it just added to the already disconnected feeling I had with the book.  I wasn’t convinced of characters’ motives or actions.   Further, much of the story was actually simply sex scenes and perhaps a few less or shorter scenes could have provided the space for more character development.  Yes, I am saying there was too much sex in this story.  How can that be, right?  It’s like complaining that a Hershey’s bar is too chocolate-y.  C-

My dissatisfaction with Changing the Game has not diminished my interest in the sister’s story at all. Bring it on!