Long-running series are tough. How do you keep each book fresh and interesting? Reader fatigue is a serious risk when there’s no promise of an end anywhere in sight. I’m a big fan of your novels, especially those written under the Michelle West name, so I’ve held fast to the belief that my loyalty will be rewarded. Unfortunately, I’ve reached the point with the Elantra novels where my patience has come to an end. 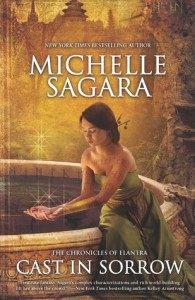 Cast in Sorrow picks up immediately after the end of Cast in Peril. This should be no surprise because this story was originally one novel split into two. But because of that, this is absolutely not the place for a new reader to come into the series. To be honest, I can’t think of the last novel in this series where I found that such a thing would be possible. I suspect it was many books back.

To recap, Kaylin Neya has traveled to West March with the Barrani, who are Elantra’s equivalent of the Fae — beautiful, powerful, and extremely long-lived. In a surprising turn of events — unless you’re a reader and know the story of the Precious Chosen One — she has been chosen as a harmoniste. Meanwhile Lord Nightshade, an outcaste Barrani lord who has been a persistent presence in her life, has been chosen as the teller.

The harmoniste and the teller are important roles in a traditional Barrani ritual that will require them to spin a story. But as the mysterious markings that cover Kaylin’s body have shown, words have true, magical power. Whatever story she chooses to form from the words Nightshade tells will have longlasting effects upon the Barrani as a race.

Your storytelling style has always been measured and carefully paced. It’s not for everyone. I realize that. But in recent years, I’ve discovered that while this style works well for me in the Michelle West novels, it’s increasingly irritating me in the Elantra novels. This is the first time that I’ve finished a novel of yours that felt bloated and excessively drawn out.

I realize this is compounded by the decompressed timeline of the books. It’s been nine years of my life while it’s been only a year or so in Kaylin’s. The impression of her stunted character growth is partially artificial. From an in-world context, it’s believable. That said, as a reader, I need a bone to show me that my invested time is time well spent. And with Cast in Sorrow, I read almost 500 pages of a story that could have been told in 300. The plodding pace frustrated me.

The worldbuilding remains the strongest aspect of the Elantra series and fans of that won’t be disappointed. We learn a great deal about the Barrani, as well as a tragic secret from their long history. I just wasn’t able to appreciate it fully because of how the story dragged. Of course, I also freely admit the Barrani aren’t my favorite of the Elantran races. (Where is the Aerian book?)

We also delve into the relationship between Kaylin and Teela. I should have loved this because we all know how I feel about female friendships in fantasy. More of it, please. But rather than being fascinated by the idea that Kaylin viewed Teela as being “safe” — as a Barrani, Teela wasn’t fragile like a human and therefore not as likely to die — I found myself growing further disenchanted. Their relationship only seemed to reinforce the idea that Kaylin was the Special Chosen One, and that is my least favorite part about Kaylin’s story.

While I’ve stuck with the Elantra series for 9 books, I think it’s time for me to step off the bus. I’ve hit the point in the books where I don’t see an end in sight and there’s no payoff for the time I’m investing. Maybe I’ll come back to it some day, but for now I think this is where Elantra and I part ways. C-

→ Jia
Previous article: Podcast 55. In Australia with Destiny Romance
Next Post: Daily Deals: A Pulitzer Prize winning novel; a girl addicted to men; and a captured Viking struggling with fidelity