This is book two in the Max and CeeCee saga. Book one is Masked by Moonlight and introduces Max Savoie, the inheritor of the criminal empire of Jimmy Legere, and New Orleans homicide detective Charlotte Caissie. Max and CeeCee love each other and profess their love multiples times throughout the book but their love is challenged by their competing interests and moralities. 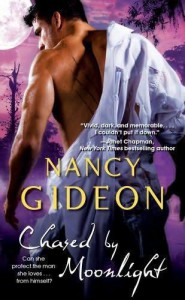 Max never intended to take over control of Jimmy’s empire but he realizes that he can’t allow Jimmy’s weak, amoral brother run it either. Further, Max discovers that there is a whole community of shapeshifters who have been used as hard laborers and enforcers for the criminal sector. These men and women live shabbily and without pride. Max has the potential to give them a better life and he wants that or them. He’s never had family other than Jimmy and amongst his kind, he feels a sense of kinship he has never had before.

The dichotomy between Max’s two sides are shown in sharp relief in this book. He is overwhelmed by the business side of the empire and must rely on people he doesn’t trust to carry advise him. The only thing he has been trained to do is take orders and now he must not only give orders, but make decisions about which orders to give. Plus, he desperately wants to find out more about his past. Yet, his dialogue is that of a smooth seductor and he radiates power to most.

CeeCee is struggling with having a relationship with a known criminal and maintaining her reputation and position as an officer of the law. This comes to a head when a high profile murder occurs that places Max in the suspect seat. CeeCee demands to remain the lead detective on the case even when confronted by her captain about how it would look to the public. CeeCee manages to convince her captain that she will remain impartial.

This series is premised on mysteries solved, in part, by CeeCee whose PROFESSION is to build a case to bring criminals to justice. It is set in our world and she presumably operates under our laws. Now I understand that Louisiana is the only state in the union that operates under the Napoleonic Code but even so there is still such a thing as conflict of interest. CeeCee, as the lead detective, would have to testify about the case she put together and if she is SLEEPING WITH THE MAIN SUSPECT, her credibility would be in shreds before the criminal defense lawyer stood up and said “May it please the Court.” Here’s how it would play out:

Detective Holland, you are the lead detective on this case, correct?

The mother of the deceased informed you that Mr. Savoie threatened her at a charity function, correct?

You provided an initial alibi for Max Savoie, correct?

Despite this, you remained as the lead investigator in this case, correct?

Mr. Savoie’s alibi was that he was sleeping in bed with you after having sex, correct?

Objection, your honor, and move to strike the sex reference as not relevant.

I’ll rephrase, your Honor. Mr. Savoie’s alibi was that he was sleeping in your bed, correct?

It later was determined that Mr. Savoie was missing during the critical time period during which the decedent was killed?

You did not divulge this information, did you?

This information was revealed by Mr. Savoie through questioning, correct?

Throughout the investigation, you continued to have sexual intercourse on a regular basis with Mr. Savoie, true?

You maintain you were able to conclude with your “independent judgment” that he did not commit the crime, correct?

I know some authors don’t want to be bogged down by FACTS and REAL LIFE LAWS and CRAP LIKE THAT but seriously, if an author is writing a police procedure book then some adherence to the laws must take place in order to maintain some authenticity for the story. Otherwise, why have the heroine be a homicide detective? Just to provide conflict? The conflict, though, is there because of the structure of law v. criminal and when the structure isn’t adhered to, there isn’t any believable conflict.

Obviously this issue bothered me quite a bit and in fairness, you are not the only author within the romance genre that violates this fundamental principle, but lack of attention to these sorts of details that makes it easier to dismiss romance as a lightweight genre.

It would be easier to accept the plot problems if the romance was strong but I felt that the attempts to elongate tension between CeeCee and Max became contrived. In cycles, CeeCee and Max would fight, say that they love each other, have sex. Rinse and repeat. Again and again and again. The “I love yous” became empty platitudes. CeeCee clearly had a problem with Max’s lifestyle, the people in his life, and the demands of his otherness. These were completely understandable and her character arc in this book was trying to come to grips with these things. What I struggled with was that either CeeCee would have to change fundamentally or Max would. Max could never, however, shed himself of his shapeshifting nature. He would always be driven by his otherness, to some extent. We never saw CeeCee change fundamentally. What we saw her pay lip service to this change by saying the right things (I love you, I want to be with you) but there was change in her character. To a great degree, the CeeCee that you see in Book 1 is still the same person in Book 2, unchanged.

What drove me to finish the book is the mystery behind Max’s life. Who is he? What else is there out there in the world that we don’t know about. Max’s story is quite compelling and his duality of strength and vulnerability different and intriguing, unfortunately, these things weren’t enough to save the book from its myriad of other problems. I waffled back and forth on this grade between D and C-