I have to start out by saying that those abs look faker than a Louis Vuitton knock off sold on Canal Street. Ahem. Cade is one of the MacKenzie brothers and I think I bought it because it was on sale. From the website, it appears that Cade is the last of the brothers’ books to be written although I wasn’t clear where he fell genealogically speaking, other than the middle. 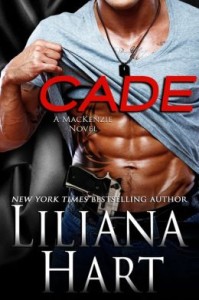 Cade has a troubled past. As a Drug Enforcement Agency (DEA) agent, he went undercover to infiltrate a drug lord, fell in love with the daughter, and then lost her in a violent attack. He was saved but his cover was blown and his heart was broken. He agrees to consult for the Fort Worth police department on a gruesome case involving the disappearance and mutilation of women. Cade, his superiors, and the Fort Worth PD believe that these killings may be related to the drug lord that got away.

Despite agreeing to only a consulting job, Cade purchases a house and moves in next door to Bayleigh Scott, the owner of a local lingerie store that offers handmade intimates that Bayleigh designs and creates herself. Weirdly / coincidentally, Bayleigh is the sister of a Navy SEAL who serves on the SAME SEAL team as Cade’s brother because, you know, there are so many of them swimming about, particularly in Fort Worth, Texas.

“I’m a man who demands everything from my lovers,” Cade declares.

“Not me,” Shane, the youngest dissents. “I only demand half because I prefer threesomes and I’m only able to give half with two of them in bed with me. What about you Declan?”

Declan, the older of the two, squints and grunts.

“He’s a generous lover,” Cade translates for the rest of the family.

When Bayleigh confronts Cade about not being a good neighbor, Cade’s interest is engaged. He realizes he is a bad bet as a boyfriend for Bayleigh, too scarred from his past and too unavailable because of his job. Nonetheless he pursues her because of the intense physical attraction. Bayliegh’s last boyfriend and fiance ran her down, making her feel unsexy and ungainly. After a little prodding by Cade, Bayleigh falls into bed with him.

The sex scenes are decent and Cade and Bayleigh make a good couple. Cade enjoys bossing Bayleigh around and she enjoys taking his orders. It’s easy to see why this series is fairly successful. Enough hints are dropped to intrigue a reader into reading more about the MacKenzies and Scotts but the romance between Cade and Bayleigh is fairly conventional. There aren’t any surprises here and a familiar reader will be able to script out the scenes in her own head.

I did wonder why Cade kept trying to convince Bayleigh to sleep with him when he knew he was bad news for Bayleigh (just as he knew he didn’t want any of his type dating his sister) AND he knew that any woman he spent time with would automatically become a target for the bad guy. It came off as kind of selfish instead of sexy. He claims that he is screwing her in order to protect her which is not so far off the infamous “I’m in your ass saving your life” line.

“So you’re saying you fucked her for her own safety?” Declan asked with a snort.