I enjoyed the “Demonica” series and liked the spin-off “Lords of Deliverance” series even more, but this book, which debuts a new paranormal romance series set in a different alternate universe, just didn’t work for me. I’m having some troubling articulating why, but my biggest clue is that I’m having no desire whatsoever to return to this world or to follow any of these characters into future books. 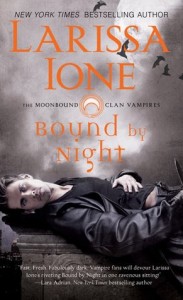 Eight year old Nicole knows something’s up. Normally a vampire servant (yes, vampire servants!) would keep his eyes humbly down, but not today: “This time, he looked at her the way her dad looked at the Thanksgiving turkey.” But no one listens to her, and just a little while later, most of Nicole’s family is dead and she is badly injured and severely traumatized.

Twenty years later, Nicole is a scientist at her family’s company, specializing in exploiting vampire physiology for human uses. But she’s aghast when, as the new CEO, she’s accused of ordering the death of numerous vampires — although she’s very frightened of them, the memory of her beloved vampire nanny (yes, her vampire nanny!) keeps her from seeing all vampires as vicious animals. When she’s kidnapped by a vampire named Riker, who needs her to order the release of one of her company’s test subjects, she begins to understand how wrong the human treatment of vampires really is. Also Riker? Really hot.

I think the aim was for something new and interesting here, but for me the mix was just so off. The elements that strive to be new — the worldbuilding — seem confused and ridiculous. There’s all kinds of complicated who-has-to-drink-what-kind-of-blood-when scenarios that made me tired.  The clan names — MoonBound and ShadowSpawn — have an incongruous, off-putting high fantasy sound to them. And enslaved, defanged vampires as nannies and butlers — seriously?  The blatant parallel to American slavery makes no sense whatsoever — though the use of the vampires for scientific experiments sadly does — and it’s presented in a squirm-inducing way. The racist who loved her nanny is such a well-known cliche — perhaps that was the point but if so, it didn’t come across, especially when late in the book Nicole then goes on to think about the enemy clan as “what amounted to a den of wild animals.” Yeah, some real consciousness raised there. There’s also a Native American connection to vampirism which made me uncomfortable. Again, possibly I missed the point, but it felt exploitative.

And then the elements that strive to be the usual enjoyable mixture — the basic characters and relationship — came off as a little stale. Dudes are cruel, violent, and kinda homophobic — until they inexplicably fall for a woman, and then they’re also protective and endlessly horny. Women are tough — especially on each other. I’m having trouble commenting on the relationship between Nicole and Riker because there just isn’t much to say about it. The sex is hot, there’s a bit of a twist caused by Riker’s guilt over his dead mate (the previously mentioned nanny — slightly icky, but that’s probably just me) and it did make my heart happily twinge a few times.  I’d say I mostly enjoyed the relationship — just not quite enough. I never got swept away with fast-paced excitement, which is really what this type of book is for.

In the end, what it all came down to is that neither the worldbuilding nor the romance were captivating enough for me to not be bothered by how intensely violent and upsetting much of the book is. (It’s the same thing that eventually happened to me with the show “TrueBlood” — and the comparison is an apt one.) Other issues aside, there’s a lot of gore, torture, and general awfulness.  I really needed to be swept away to make it worthwhile.

I wish I were sharing this review with another reviewer, because I don’t feel like I’m doing a good job of conveying what other readers might like about the story.  I’m sure there’s an audience for it, and honestly, because of how much I got into other Ione books, I’m surprised and disappointed that it isn’t me. But it isn’t.  C -.