I have no idea where to start with this review. My reactions to this book ranged from glee to boredom. The heroine is a personality-free wimp. The hero is an ass. The story brings nothing new to the table and reads like fanfiction. And yet every time I told myself I would not continue reading this book…I read more pages. 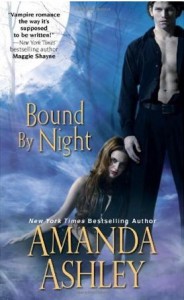 Bound by Night is about the romance between human Elena and vampire Drake. Elena is a young twenty-year old orphan living in Transylvania with her uncle. Her uncle wants to marry her, but Elena wants nothing to do with him. One night when her uncle pushes his attentions on her and kisses her, Elena knows she must run away. She runs to nearby Wolfram Castle. It’s rumored to be haunted. As soon as she gets into Wolfram Castle, she lays down on a couch in the foyer and goes to sleep. The owner of the castle, Drake, sees her there asleep and must have her. He grabs her and puts her to bed. In his bed. After he undresses her so she can be comfortable of course.

Drake continued up the stairs and into the lord’s chamber. After removing her T-shirt, khaki shorts, and shoes, he tucked her under the thick blankets in the big four-poster bed.

Then, because he is hungry, he feeds on her while she is unconscious. I had a very big problem with this, as this is not hero-like behavior.

The next day, Elena wakes up and finds herself unclothed in a stranger’s bed, and her reaction is not to call the police, but to wander about the castle, curious about her new surroundings and her new friend Drake. Their attraction continues to grow, and the story spirals out from there.

I have a long, long list of problems with Elena, the heroine. In short – she is clueless. Even though she lives in Transylvania, it takes her forever to actually figure out that Drake is a vampire. He doesn’t eat meals with her. He only shows up after sundown. He wears a cloak and is very pale. She sees his eyes have a red gleam every now and then. He lives alone in an ancient castle rumored to be haunted. When she cuts her finger, he sucks the blood from it. He has no mirrors in his house. She comes across a coffin in a secret room.  After all this, she still doesn’t put together that he’s a vampire until she catches him sucking blood from someone’s neck. Then, she is horrified and surprised. Meanwhile, I’m horrified that this clueless woman is our heroine.

Elena also reads like someone out of a bad fanfiction (which might not be too far off the mark, given a quick perusal of the author’s website). She is a virgin who has no friends in town. She has a molesting uncle. She’s a good girl who has never had sex, doesn’t own a phone, doesn’t go to college, and doesn’t do anything but exist to be a foil for the hero. Her reactions – and her thoughts – are so bizarrely anachronistic for a modern twenty year old that for a time, I thought I was reading a historical paranormal and a find/replace had been done to change ‘trousers’ to ‘jeans’ every now and then. Elena acts and thinks like a prudish Victorian spinster. Her thoughts on sex as a modern twenty year old is that it is something wives suffer for their husbands. This does not strike me as a twenty year old mentality.

The longer the story goes on, the more Elena remains a victim. Another vampire brutalizes her and she has to be saved from him.  She also has to be saved from her uncle. Drake is the one that saves her every time, and Drake is the one with purpose in this story. Which is a shame, because he’s an ass. Not too far into the book, they decide to marry to save Elena from her uncle. Elena doesn’t want to have sex, so Drake promises her that they won’t until she is ready. Then, a day or two later, he decides that they should have sex to ensure the marriage is not annulled by other vampires. He is certain she’ll object to this, but doesn’t care:

He considered waiting until she was asleep, then hypnotizing her so that she would give him the answer he wanted. He hoped it wouldn’t come to that, but if it did, so be it. He would do whatever was necessary.

The man’s an ass. He also thinks of Elena in insulting, dismissive terms.

He had thought to gentle her to his will as one might gentle a filly who had not yet learned the touch of her master’s hand.

Take note, romance heroines. If you are reluctant to have sex with an aloof, mysterious man you just discovered was a vampire, it’s not that you have common sense or are not attracted to him. It’s that you just haven’t yet learned the touch of your master’s hand and need to be gentled.

His high handed and sometimes callous treatment of Elena did not endear me to him. Nor do we get to see how he treats her wonderfully in bed, because all of the sex scenes are a paragraph long at most. Even for all of this, the first half of the book moves at a fast pace and I found myself reading to see what would bizarre thing would happen next.  The second half, however, becomes murky with vampire politics and I found myself growing bored. If the first half of the book was head-scratchingly fascinating, the second half was simply bland vampire filler and domesticity between Elena and Drake.

I have no idea what to give this book. I didn’t hate it, but I’m puzzled by it and the unlikeable characters. I think I’m going to go a little higher than a D, simply because of this line:

You cannot imagine the enjoyment I got out of reading that. C-