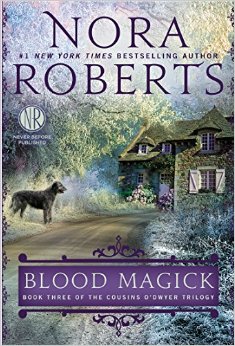 You and I have a long history, and it’s for that reason that I’m always excited when you have a new book releasing. On top of that, I enjoy your “para-Nora’s” and your Irish set books the best, so your trilogy, The Cousins O’Dwyer should fall right in my wheelhouse. I liked the first in the series quite well, but the second I found draggy and slow, with the romance really taking a back seat to the overall story. Given that I expect romance when I read your books, this was a bit of a disappointment to me. Nonetheless, I bought the third in the trilogy, Blood Magick, the day it released and opened it with the hope that it would provide a more solid focus on romance.

Branna O’Dwyer is one of the Three that make up the Dark Witch, descendents of Sorcha, the first Dark Witch. She is a healer and powerful witch. She and her brother Connor, and her cousin Iona make up the Three, and they’ve been battling Cabhan, an evil sorcerer over the course of the last two books. They are joined by Connor and Iona’s loves from the past books, and by Finbar Burke, Branna’s childhood love, who bears the mark of Cabhan. Fin is a good friend, and he and Branna had a passionate love affair when they were young, right up until Fin confessed that he bore the mark of Cabhan. It was then that the lovers knew that they could never be fully together. Branna, being young, sent Fin from her, and they have loved each other from afar ever since.

Fin has gone on to make a success of himself, but he rarely is home, preferring to travel and not inflict the pain of seeing Branna daily on either himself, or her. But given Cabhan’s return and his desire to finally vanquish the Dark Witch, he’s back. He and Branna have come to a peace of sorts, but both are suffering from being so close, yet so unable to be together. But the more Cabhan’s power grows, the more they must bind their powers together to battle the evil to come.

This book is definitely intended to be an unrequited love/reunited lovers story. Branna and Fin circle around each other constantly, and spent most of the first two books bickering and sniping at each other. When Blood Magick opens, they seem to have come to some sort of detente and are interacting more peacefully. Throughout the book, the reader is given glimpses of their feelings for each other, but you never really raised the stakes for us. I didn’t invest because I felt like you spent a lot of time telling us how awful it was that they were never going to be able to be together, but never actually forced me to invest emotionally in the story. On top of that, much of the book is focused on preparing for the final battle. And the preparations are described in intricate and LONG detail. So much so that if I had an ounce of magic in me, I think I could compose a spell. While normally, paranormals featuring witches really do it for me, this book was slow. When I say slow, I mean, a lot like wading through really boring molasses. And the detail was so much that you barely left time to grow a romance that had a lot of interesting potential. Honestly, it took me more than three days to read the final 15% of this book, so bored was I. I would have DNF’d it, but I knew I wanted to review it, so I persevered. While I maintain that you still have a truly deft and gifted hand at creating a sense of place, and this series is no exception. I’d travel to Ashford Castle any time. Sadly, I think you were so busy writing a primer on magic, you forgot to create an interesting plot.