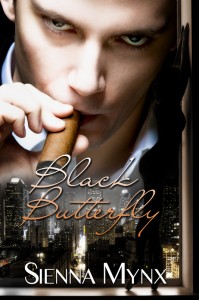 In the grand tradition of harlequin presents, you bring us a multicultural story of a down on her luck heroine and a magnetic billionaire determined to possess her. I picked this book up after reading a positive review for Buttercup, another Mynx title, at Karen’s blog.  Her complaints were that Buttercup was too short and the villain’s motivations were confusing.  In Black Butterfly, the book is 140,000 words and there is no vvillain. Unfortunately it didn’t work for me as I had hoped.

Sydney Allen is a dancer but not one with classical ability. From the descriptions in the books, it sounds like she dances with a lot of passion but not as much technique as is necessary.  I struggled a bit with Sydney because she just didn’t appear to be as strong as the other dancers. The only training she received was through her mother’s dance class in church.

I think if Sydney’s presentation was modern dance instead of ballet, her lack of technique and training wouldn’t have concerned me. But she wanted to be the prima ballerina in a major production. Sydney has this exchange with the choreographer:

“But you are not a dancer.” The comment delivered the desired blow to her pride. Sydney felt small in front of the tiny woman. Gustav moved in closer. “You’ve no discipline, no training, and doze feet are unmanageable.”

“I disagree, Madame. I’ve earned my spot, and I’ll earn your respect. I hurt my foot, but—”

The reason that Sydney gets a position in the production is because she catches the eye of Nolen Adams who was helping to bankroll the production; not because she was a superior dancer. Sydney’s refusal to accept that her position was given to her because of Nolen’s interest grated.  The dancing aspect tapers off in the book. We are told that Sydney is a great singer too and I was left wondering why this gorgeous and talented dancer/singer wasn’t a pop star instead.

There is a strange secondary romance between a really awful photographer and one of Sydney’s roommates, Trish. I don’t even know if  I should label it a secondary romance because it seemed to take up as many pages as the romance between Sydney and Nolen. I was frustrated at how Portia, the third of Sydney’s roommates, a woman who used her body to move ahead, was portrayed as villainous when Sydney was doing essentially the same thing. I didn’t care that either of them were doing this, only that it was hypocritically portrayed.

The entire book was really a romance featuring anti heroes and the women they loved. Neither man felt as magnetic as he was written. Nolen, in particular, was a horrible bastard. In a scene with a previous lover, he tells her that she is bland and boring and “mine for the taking.”

Stopping her striptease, she froze. “What did you say to me?” Sitting forward, he stared at her coldly. “I said, don’t make a fool of yourself. I know you’re mine for the taking.”

“What we had was fun for a moment and pretty bland toward the end. I’m bored with it, and I’m bored with you,” he said, well aware that his words were like a slap across the face.

There were some serious spelling errors like ““Owe Nolen, not so hard.”

Also frustrating for me was the writing technique. The story would switch, in the middle of scenes, from one couple to another. One moment you would see Nolen and Sydney eating a late night snack and in mid scene, the reader would be taken to Todd and Trish eating a midnight snack. Or Nolen and Sydney would be having sex and then we would see Portia and Ricky having sex. It was jarring and I didn’t understand the purpose.

This book was over 140,000 words long and I guess it had to be that long to accommodate both love stories but I couldn’t help but wonder, as I labored for the finish, whether this wouldn’t have been better served as two separate books.  C-