“Marty Lopez is living with HIV. He is also a recovering cocaine addict and has done time because of his addiction, before developing a second career as a substance abuse counselor. Over his family’s opposition, he moves to Texas from California, looking for a new life in a small town.
Angie Davis is divorced. She lives with her grandparents and goes to school part time, and she really likes the new counselor at Second Horizon, the treatment center where she works.

When Angie learns that her current boyfriend has been unfaithful, Marty offers a listening ear. But friendship is all he offers, because the consequences of his past don’t leave room for love in his future.

Angie, however, has other ideas. As the months go by, friendship becomes love and love becomes commitment, until family, fear, and the ghosts of Marty’s past combine to test Angie’s faith and thrust Marty into the public eye. Suddenly their love must survive not only their own doubts, but scrutiny from an entire town.” 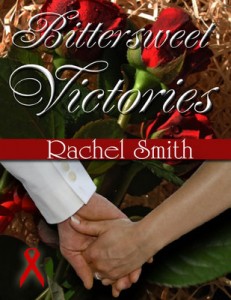 I can’t recall exactly how your book came to my attention but it’s definitely unique. An ex-con, recovering drug addict, HIV positive hero – wow, honestly can’t say I’ve ever seen this combo before and here there’s no sugar coating what Marty did. No justification of why he did this, no miraculous redeeming reasons behind it. He’s guilty as charged, on parole, attending NA, paying restitution and facing what HIV might do to end his life early even if he takes his meds, boosts his immune system and does everything he can to keep living. At first, despite all this, he seemed a little too perfectly reformed. I just didn’t get an image of him having anything to resist unlike some of his sponsees. Even when he does briefly fall off the wagon, he immediately repents, reforms, goes back into sponsorship and faces few repercussions from Angie or at his job.

Angie is so loving, so supportive, so mothering. But from what you have her say after attending Al-Anon meetings, I guess this can be a common thing among families of addicts. The way she pushes, I can understand Marty’s frustration and slight anger though, again, they discuss things loudly a bit, come to a quick resolution of their conflict and sail happily on. This seemed a little ‘skimming over’ of the issues they faced and I was left with the feeling of unease as if they were papering over their problems. One major thing that I didn’t notice getting addressed was the’ initially important to Angie’ issue she had with how Marty had dealt with telling his sexual partners about his condition. This first seemed like it might be a deal breaker for their relationship then as time went by, it’s not mentioned again.

So while Angie is Miss Fantastic, the opposite end of the spectrum is demonstrated by Marty’s large family which is both supportive – while smothering – and also so quick to believe the worst can and is happening to and of him. With a family like this, who needs negative enemies? I do like that there’s little effort to make sure that the fact that the hero’s family is Hispanic is highlighted – hey, folks – remember the Lopezes are HISPANIC! Got that? The last name, a few ‘Tios’ and other words tossed in the conversation and reference to his sister’s wonderful pico de gallo are about it.

Generally I like a bit of description to set a scene or initially describe characters but here there’s too darn much description in places. Did we need a list of every cat supply bought for Bella? Every article of furniture and decoration in the tiny apartment Marty and Angie share? Every piece of clothing they were wearing during the early scenes of the book? Nope, I don’t think so. And if anyone’s ever wanted to know about sexual practices that are okay between sero-disparate couples, they can learn most of it here along with the proper way to apply a condom. The first sex scene is a little too high school and almost giggle inducing though I appreciate Marty’s concern for Angie.

The tone of the book can get preachy at times. Angie is Righteousness Personified when arguing with her sister about Marty. Marty’s brother Steve takes up the banner later in the book when telling off the rest of the Lopez clan when they’re ready to down Marty yet again. Marty downs himself for much of the book and while normally I get quickly tired of the martyr hero or heroine, in this case it’s more justified as Marty did some stupid, selfish, arrogant, illegal and appalling things before being caught and convicted made him see the light. Then there are also the references to Higher Powers while talking about the 12 step program. There’s definitely a place in the story for the 12 step stuff and it makes perfect sense here but depending on reader’s tastes, all these might become too much.

The pace of the novel felt a touch off to me. The opening and middle sections have a leisurely feel but the last section is a descent into a three ring circus. The arrival of the large Lopez family for the wedding then an intervention gone bad followed by a shooting, the SWAT team, regional news blanket coverage, a major hospital scene, surgery, a transplant, more news stuff and then finally the wedding was way too much of a pile on.

“Bittersweet Victories” does convey the ending of HFN in the face of Marty’s illness. You don’t attempt to miraculously cure what can’t be cured. Marty and Angie do know what they are facing plus what might be coming down the road in the future and seem content with that. Because of all these issues, this won’t be a book that some readers are going to want to read for whatever reason but it’s one that I’m glad, despite the grade, that you wrote and that I read. C-