REVIEW: And Call Me in the Evening by Willa Okati 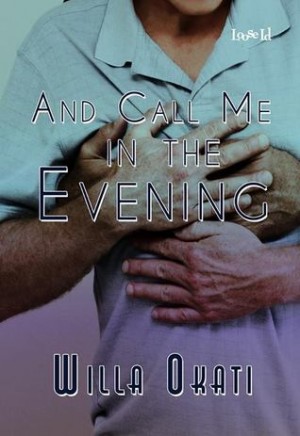 When I first saw the sequel was out, I was pretty excited because I had very fond memories of the first book in the series, And Call Me in the Morning.  For various reasons I explained in my recent review, the first book didn’t work quite so well for me on re-read as it did back in 2010.  I’m always a bit nervous when a book I’ve enjoyed gets a sequel – can it live up to the prior experience? Unfortunately in this case, it provided more of the same rather than anything new and overall, it was a disappointment.

Five years have passed since the events of And Call Me in the Morning and Eli and Zane have been splitting their time working  for Medicins Sans Frontieres, in places such as Brazil, and the rest of the year in Chicago – Eli at the Immaculate Grace Hospital and Zane lecturing at Chicago University.  The problem for me, repeatedly through the book, was it felt more like it had been maybe one year since the first book, not five.  Five years into a relationship I would have expected most of the problems Zane and Eli experience to have already come up and been dealt with.

Both Zane and Eli became ill when working in Brazil, the result of drinking bad water, and were air-lifted out and repatriated to Chicago.  Zane has mostly recovered and is back at work, Eli is still a little shaky on his feet and it seems Immaculate Grace are unlikely to find work for him when he’s ready.  In this pairing, it is Eli who is the the more “stick in the mud” character and Zane who is looking for new challenges and vistas.  Eli has had enough of going overseas to practice – he wants to stay home.   But he also wants to be with Zane and he decides he will continue to follow Zane wherever he will go because that’s what’s most important to him. Rather than, you know, have a conversation about it. [insert eye roll here]

Richie and Taye are having some issues too – I found these pretty vague and ultimately unsatisfying.   Holly and Diana make a return appearance and they are much the same but in a good way.

Out of the blue, Marybeth (Eli’s ex-wife) starts texting him and wants to meet up. Eli keeps ignoring the texts and eventually Zane sees them and conflict ensues.  I didn’t really understand this. I didn’t get why it was a secret, why he didn’t just call the woman and find out what was what.  The texts themselves, coming apparently from nowhere, seemed oddly familiar and kind of sexual and there was no set up in this or the previous book for this to be so.

Zane, when he sees the texts, is understandably jealous.  Which, when he reads the whole series of them must surely have been something he had second thoughts about because there was absolutely no response at all from Eli to any of them.  I felt like the authorial hand was visible here – the texts were deliberately provocative but even after the book ended, I didn’t know why – apart from, worded that way, they would push Zane’s buttons and cause a conflict.

More information comes to light about Zane’s attraction to Eli – it’s now been re-framed such that he wanted a sexual relationship with Eli all along. Was that an attempt at re-writing history? Or was it true?  It didn’t quite jibe with the earlier book in my opinion and given that I read them back to back, I felt like I would have picked up on any clues which were there.

Marybeth, when she bobs up in the story, seems to have thought that Eli and Zane were already in love when she left and the inference is that that is what her leaving was about but she is nevertheless surprised when she finds out they are together. I didn’t quite know what to do with those bits of information.  They didn’t sit well together.

Marybeth was again not demonised, which I appreciated but I couldn’t quite get a handle on who she was.

They hadn’t parted on the warmest of terms, but Eli wouldn’t have called Marybeth an enemy. More like a frustrated friend who couldn’t figure out any more than he could how things had gone so awry between them. He still didn’t know for sure when they’d started to sour. Maybe it’d been coming from day one. Cops made bad husbands, or at least Eli the Cop had. Eli the Student made no better a showing for himself.

This time, instead of Zane being at death’s door due to his strawberry allergy, it is Eli who has the health crisis.

And, after five years, Eli decides he might want a go at bottoming and spends an inordinate amount of time stressing about how to ask Zane about it and what it might be like.  If this was a few months, maybe even a year, after the first book, I could have got with the programme a bit more easily but as it was, I was dismayed by this aspect of the story.  First; because why does it have to be a thing?  Why do both partners in m/m romance so often have to take a turn at everything?  Why is this the “big sexual ta-da” *jazz hands* of the book?    Where in book one the guys don’t switch between bottom and top, it’s very often saved for book two in some kind of weird order of magnitude.  It is literally referred to in this book as “this last step” as if the relationship is invalid until Zane’s dick has been inside Eli’s arse.  That seems to me to be a very odd definition of a relationship. So, that little rant is more about how many books I’ve read where this has happened, this book being only one of them.  But second; they’ve been together for FIVE years.  This has never come up before? Ever?  Zane has never requested it?  When later, the text specifically states that Zane has had his fingers in Eli’s arse before, it made it even more difficult for me to believe the subject has never come up between them.  But there was no indication in the book that it ever had.

I kept coming back to – wait, it’s been five years?  Really? Because it feels like a lot less than that.  Ultimately, it reduced my confidence in their solidity rather than enhanced it. They appear to have learned nothing as a couple and be worse at communicating rather than better. But I’m constantly told how well they know each other.  In the first book, I put their disconnects down to the change in their relationship status throwing things off a bit.  But (and I cannot stress this enough) it’s been Five. Years. Five. Surely by now they’d have this covered (or they’d have split up)?

“How are your knees, old man? Strong enough to hold you up?”

But he was. Gentle but firm, Zane crowded Eli to the back wall of the shower. Eli spared a moment to be grateful this wasn’t a combination tub with a rim to slip and trip on. “Should I be asking about your knees?”

“I thought you might say that. Zane…” Eli caught him before he started his descent, checking for truth in the man’s eyes. “You don’t have to.”

Zane took Eli’s hand from its place beneath his chin and pressed his lips to the knuckles. “I know I don’t have to,” he said. “I want to. And I think you want me to as well.”

The denouement, when it came was kind of sketchy and vaguely unsatisfying.  Once again, I didn’t quite understand what they were fighting about and then Zane’s behaviour was kind of disappointing but also not sufficiently explained.

The story didn’t feel like anything new.  It felt like a rehash. After five years together, Eli still has difficulty showing Zane affection in public.  He hadn’t told Marybeth he was with Zane and he hadn’t changed his “person to contact in case of emergency” – in FIVE years.

I wanted to see this couple face a new problem, conquer a new hurdle, but basically it was just the same as the previous book and ultimately, it disappointed.  It was readable and when I was actually reading it, for the most part, it seemed harmless enough. But when I came to really think about it, just about the only things which stood out to me were negative.   I didn’t hate it but I did find it frustrating.  Grade: C-/D+