Review: An Evidence of Magic by Kris Michaels and Patricia A. Knight 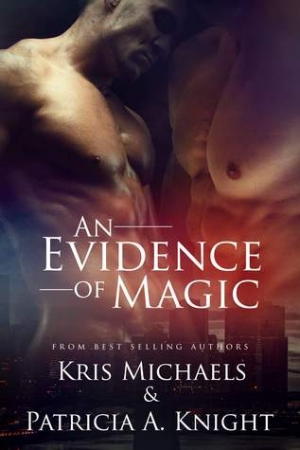 An Evidence of Magic—69K M/M procedural crime romance in an alternate reality.

Forty-year-old, hard bitten, foul-mouthed, homicide detective, Hiro Santos, suspects the owner of the art studio committed the gory killing. Too bad. There are other things he’d like to do to the gorgeous young man than book him for murder. Worse, his sexy suspect is certifiable. The nutcase claims he’s some kind of high wizard from an alternate reality and needs Hiro’s help to save their worlds.

While the striking Sable Campion appears a youthful twenty-five, he’s endured over two-hundred lonely years as guardian of the portal between Everlight and Elysium. None of those centuries offered him any experience finding a vicious killer. That’s where Hiro Santos comes in; but convincing the virile detective to trust Sable will take all his persuasive skills…and perhaps a bit of magic.

The magic they find in each other’s arms will rock each of their realities.

When this book was recommended at Amazon m/m board by several of my book buddies, I thought it sounded exactly like my cup of tea. Magic, mystery and m/m romance together sounded like great ingredients for the story. Alas, I ended up quite disappointed.

The beginning was so good. Actually, the very beginning was quite gruesome – we get to witness a gruesome murder during a theft gone wrong, but then things get interesting. Hiro arrives to investigate this strange murder, where the victim’s body parts are left all over the place but there are no fingerprints, no nothing. When Sable, the owner of the place arrives, Hiro is attracted to him, which is unfortunate because he sounds like a perfect suspect for the murder.  When Hiro questions Sable at the police station, Sable tries to establish his alibi by explaining that during the time of the murder he was on the 40th floor of the building even though it does not have a 40th floor, and that he entered the building from a closet which is really an entrance from another dimension. On top of this, Sable helpfully explains that he is a High Wizard in that other parallel reality and one of the gatekeepers for the entrances to this dimension.

Not surprisingly, Hiro thinks his suspect is preparing for a future insanity defense, assuming he will be charged with murder.  Their initial conversations were really amusing. And surprise! Sable really is a high wizard from another dimension, one which looks a lot like Everlight but is not quite identical, and Sable has truth gears placed on him so he cannot lie when he answers questions.

Sable also needs Hiro’s help to investigate the murder/s – someone is killing the people who are charged with opening and closing the gates to Hiro’s reality, and also there is someone hunting the members of the governing body in Sable’s reality. It looks as if all these murders are connected.

Of course first Sable needs to convince Hiro that he is speaking the truth. Eventually he manages to do so and convinces Hiro to help him, even though Hiro really dislikes the people who govern Ellisium.

I could not wait to see what would happen next. Unfortunately, what happened was not only extremely fast attraction between the guys (I don’t mind fast attraction, just please let them develop something more lasting a little more slowly).   I am not sure whether it was a day or a day and a half, but the policeman and the former suspect managed to go from “I don’t do relationships at all” and “I do relationships but I have been burned before” – to “oh YAY, our souls merged after sex (there was even a blinding white light) and we became husbands/life partners forever.”  Okay then.

And I really disliked the flowery language that was used to describe sex. Here are some examples for you to decide whether or not you would like the writing.

“The hard, pebbled flesh bloomed into a beautiful red bud and the man shook under the attack of Hiro’s teeth and lips …” (this is only part of the sentence).

“He pushed back inside that glorious warmth and rotated his hips, catching Sable’s prostate, sending a shiver through the man.”

“He rocked repeatedly into the hot confines of his wizard, sending his essence deep inside his man.”

“His husband turned his glorious chocolate gaze toward him and grunted.”

The mystery itself was a little strange – the group of people the killer belonged to was correctly suggested almost from the start, and I understood their motivations, but because we were not given any clues about those people’s identities (we mostly knew them as a group), I felt that the killer was chosen at random if that makes sense. I just don’t see how the reader could have guessed it.

I guess Hiro’s revelation was supposed to come as a bigger surprise? I am not sure.

When I was deciding whether to get this one I was also tempted by the promise of complex world building. Well, as I said ingredients were there, but I do not think it was a success.