REVIEW: A Wind Out of Indigo by Callan Primer

Thank you for sending me your book for review.  I really liked the idea of this book as pitched in the review query and initially I was very excited about where the story was going.  Alice Standish, former mistress of the King, is kidnapped and brought to the palace.  Either marry Louis Montanero, the margrave and Warden of the Night or suffer dire consequences at the hands of the new Queen, Marie, who is now Queen of Day but cousin to Louis.  Some of the lowlanders still chafe under the King’s rule and look to Louis as the acceptable heir to the throne.  To disqualify Louis in the eyes of his people, Ned, the King, and the Queen ask Alice to marry Louis because under lowland law, a king cannot marry a slave born woman. 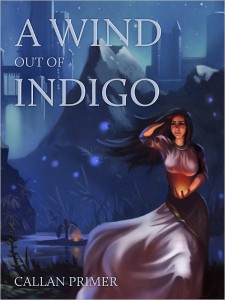 In exchange of the marriage, Alice gets Ned to agree to repeal the Pursuit Clause.  It used to be that prior to the treaty between the lowlands and Highlands, if a slave of the North stepped a foot on the soil of the South that she or he would be free.  The Pursuit Clause gave the slave owners the right to pursue their quarry into the south.

Alice was a slave until Ned and his troop of men came stumbling through her orchard. She fed them and he took her up and carried her off.  Despite their 10 year relationship, Ned and Alice did not love each other and Alice gladly let him go when he needed to marry to secure the crown.  All this is interesting. Unfortunately, it is not what the story is about.  Instead, the story’s main thrust focuses in a magic in the southern fens but we aren’t introduced to this issue until about the 30% mark of the book.  I think that the story gets lost in the attempt to make a rich and complex world.

The problems were in both the big and small details.  Alice is a former slave and there are some strains of the slave issue that follow her into the south but there is no explanation of who were slaves, how they were freed, what role they played in the south versus the north.  Slaves seemed to be accepted in the south by everyone.  The highlands were bright sunlight and day filled. The lowlands were dark, an eternal night. Why?

There were airships and a new gasworks plant.  The gasworks plant processed oil and created diesel.  Where was the rest of the manufacturing that would go along with that?  Why was the gasworks, the only one, not creating a stronger foothold of power for the south?

There is such a strange amalgamation of landmarks such as the men wearing kilts and the use of Highlands v. Lowlands suggesting an alternate form of Scotland.  Yet, there are ice walls to the north and other references that might make one think of the Netherlands.  There was a mix of surnames from Indian to Japanese to Korean/Chinese.  There is Standish, Louis Monatero, Janey Li, Abel Wahid, Kai Sung, Rafe Tokami.  Surnames provide a lot of cultural and regional placement.  If this was a full on fantasy, then the use of existing landmarks confuses readers.

The world building in the story is dense with little dialogue or character interaction throughout the story.  The latter half of the book moves at a much faster clip and I couldn’t help but wonder if the story began at the wrong place.  The pace of the story was slow, without anything really happening until about after chapter 8.  Up until that point, Alice travels from the Highlands t o the Lowlands and settles into her home.  There are a host of new words thrown at the reader and new meanings to existing phrases such as “For a fire marriage to become permanent, the couple had to live together for a year and a span, or have a child together.  Otherwise, it could be asserted by one party just leaving.”  Asserting means to leave the marriage, but I’m not certain the exact meaning or why the word “asserted” was used. I point this out as an example of how word choices made the book less accessible and slowed down the pace at which the book moved.  I had to re-read words several times to gain their meanings.  I wasn’t even sure what a span was.  I did a word search after multiple appearances but still was unclear.

Finally, the romance is non existent. I think Louis and Alice are present in about three scenes together and while the conflict presented could have been a very good one, it wasn’t explored in depth. This is really a story about the world and about Alice’s battle with the big bad.  Long time fantasy readers may have a greater appreciation for this than I.  C-

→ Jane
Previous article: Stop SOPA/PIPA
Next Post: What Jayne is Reading and Watching in late December and early January