I was ambivalent about investing my time in the last of your Hellions of Halstead Hall series. I’ve read the first four with varying levels of satisfaction.  I found The Truth about Lord Stoneville, the first book, that of Oliver, the eldest Sharpe child, to be a contrived and insubstantial tale. I enjoyed the second, A Hellion in her Bed, Jarret’s tale—you did a nice job of explaining the ins and outs of making ale in the 19th century. I loved the third, How to Woo a Reluctant Lady, Minerva’s story—it was one of the better romances I read in 2010. (Giles was a dream hero: sexy, smart, and completely encouraging of his love’s dreams for herself.) The fourth, To Wed a Wild Lord, was a chore to read and, at its end, I didn’t give a damn about who killed the Sharpes’ parents—a mystery woven throughout all the books—or whether or not their busybody of a grandmother would release her fortune—all the books are based on her threat that the five siblings must marry within a year or else she will disinherit them. But, I did read the first four and, after contemplating the final book for several weeks, I decided I’d see how the series concluded. 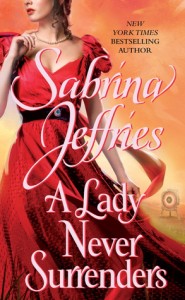 My verdict is: not especially well. A Lady Never Surrenders, the story of Celia, the youngest Sharpe sister, isn’t the worst historical I’ve read lately. (That would be Susan Johnson’s Seductive as Flame.) But as I read it, I wondered at its mediocrity. Actually, that’s a lie. As I read it, I was vexed the book was phlegmatic and prosaic. I’ve enjoyed a number of your other books:  How to Woo a Reluctant Lady is a jewel of a love story; the 1999 book The Forbidden Lord is an excellent tale, full of steam and wit. I’d hoped for better here and was thwarted.

This novel’s pairing was inevitable—anyone who has read even one of the Hellion books knows Celia Sharpe and Jackson Pinter, the Bow Street Runner hired by Oliver to investigate any number of things, are destined to have hot sex and realize the other is their soul mate.  So, I began this book—after skimming the preface, an artificial sounding letter from the meddlesome grandmother, an annoying plot device used in all the  Hellion books—wondering what Celia’s and Jackson’s story would be. What would restrain their romp toward romance? After reading almost 400 pages—the lyric “the long and winding road” kept popping into my head and not in a good way–I was disgruntled to see their story is nothing more than a wisp of a conflict explained by the overused axiom: “we can’t be together because we come from different worlds.”

This plot already appeared in The Truth about Lord Stoneville. Yes, the sex roles were reversed. In that tome, Oliver’s of the nobility, Maria’s from the commercial class. Readers know the Sharpes have already dealt successfully with this challenge. It makes no sense to devote hundreds of pages of prose to surmounting an obstacle this family has already overcome. The Sharpes themselves point this out several times. It’s clear to Celia’s brothers and sister that Jackson’s a good guy and Celia has the hots for him as does he for her. Everyone can see they should be together. So why aren’t they?  Because, in a character conversion I found baffling, Celia’s grandmother, a woman who has been pushy in the other books but still pleasant, becomes an officious harridan. Hetty Plumtree goes from likeable—I was excited, in the last book, she acquired a lover; old people never get laid enough in historical romance—to horrid. She’s like the Blue Fairy in Pinocchio; Hetty makes up random rules Celia must follow to succeed and then threatens to ignore or alter those same rules all in the name of protecting Celia.

This contrived plot would have been infuriating enough on its own but added to it is an inordinate amount of self-pitying whinging on the part of Jackson. Over and over again, he tells himself, “She could never be never be never be mine.” His reasons are all insulting to Celia: she has to have the big bucks and the hundred room home to be happy; she’d never consider a bastard good enough for her; she’s so snobbish, she’d only be happy married to nobility.  Celia is a more tolerant, open hearted woman than he gives her credit for being. I was relieved his limiting attitude toward Celia annoys her. The two probably could have worked through Jackson’s insecurities on their own but every time they grow close, horrible Hetty insinuates doubt in each of their minds about the values and feelings of the other.

Celia and Jackson are nice, good people. I like that Celia’s untraditionally unfeminine and that Jackson’s a sweetie to his aunt. Both merit the other and I was glad they found their way to true love. But watching them do so was not a lot of fun.  For much of their courtship, the two are so confused about the feelings of the other their conversations are awkward and stilted. (I was happy when, midway through the book, they managed to escape Hetty and spent some quality time together in which they didn’t speak as though starring in a bad Regency parody.) This gracelessness made many of their love scenes uncomfortable to read. I found their banter the first time they made love cringingly comical. Jackson shucks his drawers to “reveal the ballocks hanging down,” and she says, “Oh. Of course. But I didn’t expect them to be so hairy.” (Just what every guy wants to hear, right?) I squirmed through this interchange between the two as Jackson’s about to pierce her hymen,

“He forged deeper, eyes alight with a fierce hunger. “And I always thought you a goddess.”

She eyed him skeptically. “Even when I tried your patience?”

“You tried my patience? he quipped.

Halting in his press inward, he turned solemn. “I’m afraid I’m about to try your patience, most sorely.”

I’m all for wit in the boudoir, but, in this scene, the repartee is off-putting.

So, I had little love for the love story. I had even less love for the resolution of the long running mystery threading through the series. The Sharpes were orphaned when young and, over the course of the books, it’s become clear that what was initially deemed a murder/suicide was in fact something far more nefarious. (Isn’t spousal murder/suicide is inherently horrific enough?) Each book has added mysteries to the mystery: was it only their father who philandered or was their mother a cheater too? Could their loathsome cousin Ned and his father have played some role? Why did that skanky older woman seduce Oliver when he was but a lad? By the time I’d reached the end of the penultimate book in this series, To Wed a Wild Lord, I was completely confused and supremely uninterested. After reading A Lady Never Surrenders and now know what happened to Lady and Lord Stoneville, I still don’t care and think the mystery’s resolution is pretty freaking odd. Suffice to say; when the villain relies on a bad accent and painted-on hair dye, he’s unlikely to garner my interest. Furthermore, I didn’t get the sense the Sharpe children are now at peace, their souls soothed, because they no longer wonder what happened to their parents. This feels wrong to me. Perhaps the only thing more horrific than having someone you love murdered is having no idea why. That knowledge is, for the families of most victims, crucial. For the Sharpe children, it seemed to be interesting, but not profound.

The book ends with an epilogue—one of those ones that assumes readers haven’t a whit of imagination and must be told in arch detail about the wedding, the wondrously congenial relationships the couple now have with his and her families, the obligatory pregnancy, and the overpowering lust that still—and will forever—spark between the two. The last line is this: “…in matters of love, a clever lady always surrenders.” I disagree—I am a clever lady and I should never have surrendered so much time to this lackluster tale of love. I deserve—as do readers—better.

With disappointment (I’m giving this book a lowly C-.),