REVIEW: A Dance with Indecency by Linda Skye

Bootleggers are breathing down hotelier Harry McMahon’s neck. So when a beautiful, young, and very wealthy widow from Paris turns up at the Cotton Club, Henry sees it as the perfect opportunity to combine business and pleasure. First he will take her body, then her heart, and finally, her money…

Elise Rousseau may not be the mousey innocent she once was, but she can’t believe Harry doesn’t recognize her–and she intends to punish him in the most wicked way. She will make him want her body, make him give her his heart. And then she will break it, just as he broke hers four years ago…

I noticed this Harlequin Historical Undone novella right as we at Dear Author started talking about wanting to read books with more unusual settings and time periods. “A Dance with Indecency” certainly fit the bill with a 1920s time frame plus the title gave me the impression that it wasn’t going to feature that character who only appears in Romancelandia – the dreaded Virgin Widow.

Harry and Eloise meet at a speakeasy in NYC – or should I say they meet again as they already have a history. Four years ago they graduated from the same college and mousy Eloise’s heart was broken when Harry rejected her declaration of love. Eloise has fixed herself up in Paris and is now radiant and sophisticated. Though Harry has already determined he’s going to scam her for as much money as he can get in order to pay off the bootleggers supplying his hotel before he’s even met her, thankfully Eloise avoids a plotline I dislike – the spurned heroine who is so fixated on a man that she’ll spend years planning ways to bring him low. Eloise does decide to get a bit of her own back but it’s only after Harry fails to recognize the new her. 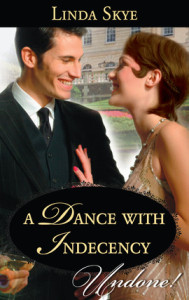 The description of how Eloise married an older Frenchman might have led me to the erroneous belief that it’ll be Harry who initiates her into the delights of sex. Not so as someone has done a first rate job of seeing to Eloise’s intercourse instruction. She’s an enthusiastic pro who dazzles Harry after heating his blood with her penchant for going knickerless.

Harry shows signs of not being the cad he’s first portrayed as. After listening to what she tells him, he takes an enormous amount of time to bring to life a bit of Eloise’s favorite spot in Paris. He’s not all bad at all. Plus he’s a considerate lover and wants her to meet the folks. And that is the point when things head downhill.

There are two points of conflict in the story. When will Eloise’s true identity be revealed to – an almost unbelievably unseeing – Harry and then how will he react? And at what point will Eloise realize that Harry’s initial intentions were to take her for all the money he can get and how will she react? Neither denouement worked for me.

Eloise is humiliated enough when Harry – finally! – cottons on to who she really is that she flees the scene in tears. Harry chases after her and then they – I was hoping for talk things out but instead another sex scene appears with Eloise acting the flirtatious sex kitten. “The hell?” I thought. They do spend a few days getting to know each other again after that but this is like Prince Charming waving her glass slipper in hand chasing a coy Cinderella before catching up to her and doing her against the wall of the palace. I was sort of looking for “let’s talk” before “let’s fuck.”

Harry’s true purpose for chasing Eloise becomes clear and she decides – after saving his ass – that she isn’t sure she can trust him again. After all, he’s broken her heart twice now. Bully for Eloise in standing up for herself. That is until Harry tracks her down months later and promises to woo her with sex. Immediately she’s all coy and flirty. Really Eloise? That’s all it takes? No discussions of what went wrong in the past? Just plow straight on into a future? At this point not only do I doubt a HEA for these two, I’m not even convinced of a HFN. The setting is the cat’s pajamas but the romance is malarkey. C-