I’ve long been a fan of your traditional regencies from the 1990s and when one I hadn’t read before was recently reissued in a 2-in-1 edition with your classic The Notorious Rake, I purchased it. A Counterfeit Betrothal contains two romances each of which affects the other. 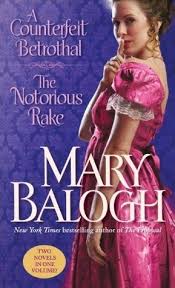 Olivia and Marcus married nineteen years ago, when she was seventeen and he twenty-one. It was a love match, and they were joyous when their daughter was born. A few years passed with no more children, but they remained very much in love, until little Sophia’s illness prevented Olivia from attending the wedding of Marcus’ good friend.

At Olivia’s insistence, Marcus went without her, but at a party before the wedding, he and his friends from his university days got drunk. Marcus’ friends mocked his stodginess as a married man and dared him to go to “a tavern of low repute” with them. In his drunkenness, Marcus slept with a girl he didn’t know.

Afterward, Marcus’ conscience made it hard for him to spend time with his wife and to make love to her. Olivia kept asking him what was wrong, and finally, Marcus confessed all. A horrified Olivia could not forgive her husband, and so, after five years of marriage, they separated and spent the next fifteen years apart.

Marcus and Olivia’s daughter Sophia is now eighteen and at the prodding of her friends, she decides to enter into a counterfeit betrothal with Francis, the youngest son of a duke and duchess who were close friends to her parents. Francis used to tease Sophia and play pranks on her when they were children, but he’s willing to go along with the scheme that may just reunite Sophia’s parents.

At first Marcus and Olivia both want to prevent their daughter from marrying at such a young age. Their own youthful marriage failed, and Francis has a rakish reputation. To this end, Olivia travels to Clifton Court and she and her estranged husband join forces.

The years have been kind to Olivia and Marcus, and each still finds the other attractive—perhaps even more attractive than in the past. They treat each other with courtesy and honor, and when Sophia tells them how happy she is to have them both at the same place at the same time, they resolve to spend more time together to ensure her continued happiness.

Rumors of Marcus’ affair with Mary Gregg, Lady Mornington, have reached Olivia’s ears, and she believes Marcus to be an insatiable philanderer. In reality, Mary is only a friend to Marcus, but he has in fact had a few encounters with prostitutes, in addition to keeping a mistress in the year immediately following his separation from Olivia.

None of these encounters satisfy Marcus. He has never forgotten his love for Olivia or his guilt for hurting her badly. And so, one day, when he finds her in the walled and hidden garden that used to be their special meeting place, one thing leads to another.

Marcus finds Olivia more responsive than she’s ever been in the past and assumes the worst—that another lover, most likely her friend Sir Clarence, has taught her a greater degree of passion than he himself ever had. In reality, Olivia has remained faithful to Marcus for all the years of their separation.

Jealousy still rears its ugly head, and Marcus, in his anger, treats Olivia coldly after their encounter. Olivia wishes she could just go back to her peaceful home, but for Sophia’s sake, she remains at Clifton Court and tries to pretend that she and Marcus aren’t lashing out at each other.

Meanwhile, Sophia and Francis put on their charade, which Francis insists requires kisses, and kisses that involve tongue at that. As Sophia’s parents grant their consent to the marriage and wedding preparations begin, Francis begins to worry that he’ll be trapped into marriage. Sophia reassures him that she would rather marry a snake, an eel, or a rat, and in the next breath, talks about how to get her parents to come visit them together after the marriage takes place.

Will Francis and Sophia indeed be trapped? And will Olivia and Marcus resolve their differences and make Sophia’s counterfeit betrothal scheme worthwhile?

I had mixed feelings about A Counterfeit Betrothal because I liked the Francis/Sophia subplot much better than Olivia/Marcus main romance. I didn’t feel sufficient motive was given for Marcus’ initial infidelity. If he and Olivia were so blissfully happy (they both insisted this was the case in their thoughts) then why did he allow himself to be tempted into such a betrayal?

There are some lovely moments early on in the Olivia/Marcus part of the plot, including their first meeting at the secret garden and the caring way Marcus initially treats Olivia. But the misunderstandings between them drag on, and on, and on, to a point where I didn’t feel at all sure of their happy ending.

The other thing that really ticked me off about Marcus and Olivia’s reunion romance was the double standard. Marcus slept with the tavern girl while living with Olivia, and for all his guilt, during their estrangement he had a mistress for a year (he actually thinks about how he’s used the lovemaking techniques he learned from her to make love to Olivia), and then a handful of encounters with prostitutes, so by my count he has had several partners other than Olivia in the course of their marriage.

Olivia, meanwhile, has only slept with Marcus and has otherwise been entirely chaste. Her friendship with Clarence isn’t even as much as a flirtation for reasons revealed in the hidden spoiler.

Clarence is gay. (I didn’t love the treatment of Clarence’s sexual orientation because Olivia initially recoils to learn of it and Clarence stays completely chaste too—maybe I’m reading too much into this but it seemed to me that there was an implicit criticism of same-sex relationships here.)

And yet, despite the fact that Marcus’ infidelities are very real and Olivia’s only perceived, the amount of anger each holds toward the other is at least equal. I would even say that Marcus expresses his anger to a greater degree. And when they finally get back together, Olivia shoulders a lot of blame for having been so unforgiving in the past and not allowing Marcus to be “human.”

This last angered me too because Olivia would not have had a forgiveness problem had Marcus not felt the need to cheat and unburden his conscience to her.

What I enjoyed most in this book was the secondary romance with Sophia and Francis. This was clearly written for comic relief and managed to be pretty funny at times, especially when the two banter and bicker in ways that clearly reveal their attraction.

At times the Francis and Sophia relationship feels like a cat and mouse game but because we don’t delve much into their heads, it’s hard to know which of them is the mouse and which is the cat. The transition from fake betrothal to real love was romantic and sweet.

Though Francis and Sophia are many years younger than Olivia and Marcus, their love feels more mature and long lasting to me. Unfortunately that was not enough to overcome my feelings about Marcus. C-