I’ve never read a steampunk book and frankly had doubts that it would be to my taste but since I’m trying to expand my reading of new-to-me authors, I thought why not try a new genre as well. The results weren’t what I was hoping for but the reason for the grade isn’t the gears and goggles. Rather it’s due to some issues with the characters. 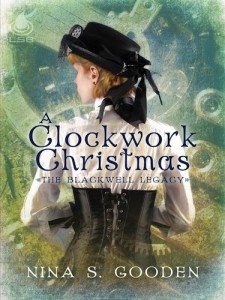 Older Olyve Blackwell knows that her actions flout propriety and at her age she isn’t likely to get any offers of marriage from the gentlemen of the ton but since she’s one of THE Blackwells, the effort to be proper probably would have been wasted had she even been inclined to attempt it. Instead she indulges her liking of things mechanical and tries to help those less fortunate than she. Disturbing visions have her asking around about missing women and she knows she’s rattled someone’s cage when an assassin tries to kill her. An unknown man comes to her rescue then gently pushes her off the train at the next station. Olyve doesn’t think she’ll ever see him again but to her surprise, he rescues her again at a ton party she attends.

Olyve quickly realizes that she’s stumbled upon the heart of the evil conspiracy behind the missing women and children but to her horror, she isn’t sure whether her savior is genuine or if he’ll turn out to be one of the inner circle. Does she dare trust her Intuition as her world collapses around her?

My suspicion that steampunk isn’t for me was confirmed but that’s not your book, it’s me. I doubt I’d have liked anyone’s steampunk and will probably avoid it in the future. The steam powered gadgets, gears, flying mechanisms and goggles just don’t do anything for me. However I suspect that you include all the necessary ingredients to make aficionados happy.

No, the reason the book doesn’t work for me are more related to the actions of the characters with a bit of the world building. I never really got a handle on the world here. I can tell it’s England and probably sometime in the 19th century but the rest is a blur. Are the Quarters which are mentioned actual places or ranks in society? What are all the feminine dress codes about? What is the Revolutionary movement? Why does the ton dislike or is it disdain the Blackwell family? What happened to Olyve’s sister? Perhaps this long novella is part of a series and more is explained elsewhere but I felt lost here.

Olyve and James Reeves have what I call insta-love. Immediately they Just Know and are in love. Why? I don’t know – time constraints? Shorthand? I usually like to see a couple interact a little more than these two do and especially if the interactions they do have are mainly life threatening. I also thought they fell into insta-sex way too fast. And the way it starts, with Olyve being threatened by the ring of villains and James having to play along is downright distasteful. She’s unsure of James then, being threatened with gang rape by the slavering others, he’s having to manhandle her to keep in his true motives hidden and she’s getting turned on. Hell to the no. Then after they are taken elsewhere, she’s after him again but it’s James who tries to put the brakes on by announcing she has gone through too much then when that doesn’t work that he wants twue lurve from a marriage and when Olyve announces she just wants him, he gives into the passion. At least this time there was no mention of the earlier “weeping sheath.” Oh, and I got tired of James calling Olyve “his sprite” and disliked the “brave little minx” as both felt slightly condescending.

Reeves has been working on some major project for a while when he’s pulled – via the comb talking box at the gambling den – onto the case of the abducted women/girls. Then when we next see him as an operative, he, while trying to save Olyve, thinks that he can’t blow his cover here since he’s been working undercover for so long to infiltrate this group. Huh? No mention of a lot of passing time between the two scenes so, huh? I do love his instructions from The Comb that the Monarchy wants case closed but without the need for trial – kind of makes James a 00 agent with implicit instructions to kill whoever is doing this.

I was also lost about Olyve. What are the barriers in Olyve’s mind? Her gift is Intuition? Just what is her “gift/power?” For a woman who is supposed to be so intuitive about danger/situations around her, she sure gets caught up in a lot of dangerous things and taken prisoner. Then, after being warned by her Uncle and attacked on the train, Olyve heads back into danger at the party. Smart? Olyve then uses another one of her powers – which she seems to pull out of a hat just when they’re needed – to find out about an object as she holds it in her hand. And she almost dies only to be saved by James. Then she says she wants to try again. James – and I – are astounded and not in a good way. There’s a lot to “being a Blackwell” and it seems to grow by the page. Her glowing/color changing fingertips sort of gross me out. There’s too much “just in the nick of time stuff here.” Though how she turned her powers on the villain-in-charge was cool.

And thus ends my first and probably last foray into steampunk. My main problems of this book wasn’t that but what I’ve outlined above. Nevertheless, the genre failed to impress me so I think I’ll stick to my historicals and contemporaries.