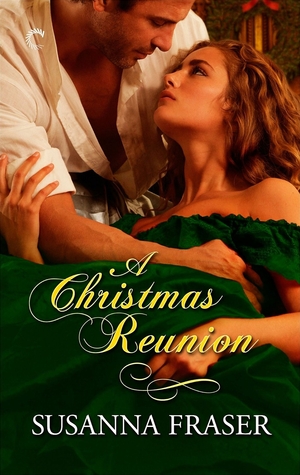 About halfway into this pleasant short story I started to have an uncomfortable suspicion about where the plot was going to go. As confirming clues piled up, I hoped the author of rich historical romances like The Sergeant’s Lady and An Infamous Marriage might pull it off in a way I was okay with. The best I can say is, it wasn’t as bad as I feared.

Gabriel Shepherd is a soldier with an unexpected duty: a Portugeuse stowaway on his ship died, leaving behind a young daughter. Having been a foundling himself, taken in by a family that later realized they were actually his blood kin, Gabe can’t bring himself to abandon the toddler. He reluctantly turns to his adoptive family for assistance, but since they sent him away to the army for kissing Lady Catherine Trevilian, an heiress they’d hoped to marry off to his cousin Harry, he doesn’t expect much. To his surprise, he’s warmly welcomed home for Christmas.

Cat has been scouring the lists of battle deaths for five years, but her relief to know that Gabriel is well is complicated by her continued feelings for him… and by her engagement to Sir Anthony Coville. There’s no question of her jilting her fiancé, and even if she could, Gabe would certainly never let her throw herself away on a bastard such as himself.

Like Fraser’s previous Christmas story, Christmas Past, this was on the low-key side for my tastes. (That was a recommended read here, so obviously tastes differ.) The main tension between Gabe and Cat lies in each wondering whether the other still cares, but the declarations, when they come, are disappointingly mild:

“He’s a dear friend,” she said. “I’ve never fallen in love. Not with anyone else.”
“Oh, Cat.” She saw her own hunger and sorrow reflected on his face. “I still love you too, but we cannot be.”
“I know.” She studied her hands, clenched in her lap. “I can’t jilt Anthony.”

Out of context, this actually sounds more powerful, but when I read it I thought, not even a second to acknowledge what she’d been dying to hear? Not the tiniest twinge of happiness to know he still loves her? I’ve had problems before with Fraser characters seeming too bloodless and accepting (A Dream Defiant,) and the overall passivity here was not redeemed by a last minute depiction of passion between them.

But that wasn’t my major issue with the story… though again, this is definitely a matter of taste.

It gradually becomes clear that Richard, Cat’s cousin and the head of the household, is gay and involved with Sir Anthony. Although they’re not as despicable as I feared — there was no initial intent to deliberately use Cat as a beard — two otherwise likable characters come off as slimy, no matter how much they rationalize the situation. I was particularly bothered by the method they use to finally reveal the truth: deliberately sharing a passionate kiss in front of her. It felt exhibitionistic and skeezy.

I appreciate that this is a perfectly plausible storyline, and that it’s a difficult issue to write about in its historical context without offending modern readers; I do think the balance is nicely maintained, with Cat neither being ludicrously accepting nor unpleasantly disgusted by the revelation. Still, I just hated this conflict and the way it was presented here. The entire tone of the book otherwise stressed honorable behavior and, well, holiday story sorts of values, and this aspect stuck out like a sore thumb.

It doesn’t feel right to judge the book too harshly because of something that that struck a false chord for me, since it’s not badly written; readers looking for a sweet Christmas historical with adorable children and mistletoe might love it. My gut grade is a D and my grade without considering the issue that bothered me would be a C, so I’ll split the difference and go with C-.