REVIEW: A Breath of Scandal: The Reckless Brides by Elizabeth Essex

A Breath of Scandal is the second in your The Reckless Brides series. I didn’t especially like the first in the series, Almost a Scandal (I gave it a C+.) and I liked this one even less.

A Breath of Scandal opens with the funeral of Antigone Preston’s father. Antigone adored her mathematician father and is devastated at his sudden death. She’s even more devastated when her venal mother announces immediately after the service that Antigone is to be wed to a neighbor, Lord Aldrich, a man who is almost sixty and malevolent to boot.  Antigone is exceedingly unwilling to pledge her hand to Lord Aldrich–she doesn’t want to marry anyone let alone a man three times her age who is, in someway she can’t quite figure out, unsavory. Before she can refuse the match, her feckless mother begs her to go along with the idea for as long as it takes to find a titled, wealthy suitor for Antigone’s beautiful, but stammering, shy sister Cassandra. Antigone very reluctantly agrees. 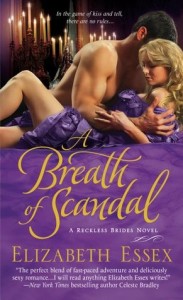 Antigone is, in general, bummed out. Her mother keeps insisting it’s Lord Aldrich or the poorhouse for the Preston women. Lord Aldrich is clearly more interested in breeding Antigone’s famed mare, Velocity, than he is in bedding Antigone. Her mother becomes more odious and less trust-worthy every day. So, what does Antigone do? She creates a scandal, of course, by punching out a grabby lord at a ball held by Lord Aldrich’s super snotty sister, Lady Barrington. Antigone’s behavior appalls everyone except for Captain William Jellicoe.  He thinks it’s excellent this tall, willowy woman has decked the lout Will watched palm her ass. And so, when he stumbles across Antigone–she’s hiding from Lord Aldrich, her mother, and all those who think her behavior was a scandal–in the Barrington’s private library, he’s charmed by her. The two drink cognac, share confidences, and agree to become “appalling acquaintances. ”

Their “appalling acquaintance” never becomes more than mildly interesting. That’s not to say Antigone doesn’t do appallingly risky things that require Will to rescue her. As I read A Breath of Scandal, I kept thinking no damn way would any young lady pull the crap Antigone does and not have it trash her life. She sneaks out of the house late at night dressed as a boy–this was a theme in the last book in the series where it worked marginally better–, goes drinking, plays cards, and generally risks her precious reputation repeatedly. I didn’t feel giddy as she acts out, I felt irritated with her. She seemed to me to be immature and stupidly reckless rather than daring and clever. It’s especially hard to fathom her behavior because her sister is indeed making a fabulous match (with Will’s titled older brother). That relationship is moving ahead at warp speeds so it’s clear that, soon, Antigone won’t have to make all her choices based on securing a safe haven for Cassandra.

Will, unlike me, adores Antigone’s risky behavior. He thinks she’s hot, interesting, and a great distraction from his professional woes. (He loves the Navy but, for much of the novel, England isn’t at war with Napoleon and so there’s no ship for him to captain.) Will’s bored and at loose ends; saving Antigone from herself gives him something to do. And, as Ms. Essex writes too many times  (in italics for emphasis), “Oh, he liked her.” I thought Will was alright–although he’s too much like the the hero of the first Reckless Brides book (I have read all of Ms. Essex’s books and the last three have had naval captain as the hero all of whom have very similar inner selves.)

The story here is so slight that it makes the book seem overly long and slow. It’s clear Antigone’s never going to marry Lord Aldrich–he’s an overly nasty piece of work–and I grew bored with all his threats and creepiness. Much of the plot centers around Antigone’s horse but that story isn’t written in a way that would engage any but the most dedicated equestrian. Cassandra achieves joy too easily and Antigone’s woes are too much of her own making. Neither of their love stories engaged me. Will’s family is picture perfect which seems unbelievable especially when compared to Antigone’s harpy of a mom. There is also a casual elitism to this book that, while common to many historicals, made those who are supposed to be heroic here less so.

When Ms. Essex first began writing, I was rapturous over her way with words. After I read this book, I went back and read her two of her earlier works. I still love the writing in those novels. But where her prose used to be hypnotic, now it’s affected. This scene is one of the many where Will has come out to again rescue Antigone.

Will Jeliicoe sat looking for all the world like a dashing Corinthian, his boots propped casually against the muddied dashboard of an elegant racing curricle pulled by a pair of lathered and spattered bays, and driven by an excited, pink-cheeked Thomas. Clearly, they had come at quite a clip.

“Devil take me,” Jellicoe drawled as if hadn’t come flying down upon her in the middle of a muddy, crowded street. “Miss Preston, if you haven’t the most remarkable affinity for trouble.”

“Me?” she shot back. I’m not the one driving like a mad Corinthian. What do you think you’re about?”

He tipped his hat cordially. “I’ve come to save you.”

“From my imagination.” He looked bemused, his brow furrowing even as his lopsided, self-deprecating smile galloped about his mouth, as if he had only just that moment realized what he was about.”

Lastly, the ending to this book is so rushed it’s a rude shock. The last chapter is all drama and putting Lord Aldridge in his proper place. There are guns, near death experiences, declarations of all kinds. Then, there’s one page, only half of which is covered with type. It’s the (dreaded) epilogue and is so brief I at first wondered if my ARC was missing text. I suspect some editor demanded a requisite HEA and Ms. Essex dashed one off. It’s not well done and it ends the book on an awkward, unsatisfying note.

I have found the both books in the Reckless Brides series slow going. The third comes out in July and features Will’s younger brother Thomas. I’ll probably give Ms. Essex one last shot, but if that book is like the first two, I’m giving up on Ms. Essex and will stick to rereading A Sense of Sin or The Danger of Desire when I want an Essex fix. I give A Breath of Scandal a C-.