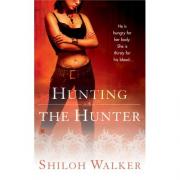 Brilliant farce of book. I loved how you took conventional paranormal romance stereotypes and just eviscerated them. You took the normal kick ass capable heroine and made her into a whiny, crying boring woman. The whole cohesive world building thing? Totally blown apart with your incomprehensible, deux ex machina filled denouement.

Kane Winter is one of the best bounty hunters in the country. His partner and he are about to nab a very pricey bounty when things all go to hell. Kane’s memory of the events that take place are indistinct because he blacks out. When he awakes, his partner is dead. Kane recalls two vampires attacking the bounty and a third vampire, a woman, joining the fray. For some reason, Kane decides that the woman is responsible for the murder of Duke.

Kendall is a 300 year old vampire who polices other vampires. Not only does she rid the world of nasty vampires, but she can also right crimes by getting rid of abusive fathers, drug dealers, and other subversive elements of society. Through her special group, she also can take children and place them in other homes and recreate their lives for them. And her band of good guy vampires has a special school for training good guy vampires and other paranormals (me thinks someone likes X Men too much).

Instead of having the book take place over a few days, this one takes place over a few years. I think it was great that you didn’t always use chapter headings to tell us of the time passage, but rather hid it in the chapter so that orienting the characters was akin to some road rally gone wrong. Classic stuff just completely turned around.

I loved that your heroine was a complete and utter mess. I think its great how you had this supposed kick ass hunter of vampires who was three hundred years old break down in tears in every chapter. I totally agree that having your heroine cry at every turn was a perfect way to show us that she was keeping her humanity. There was certainly no other character trait that you could have given her such as kindness, generosity, sympathy that could show humanity. Being able to cry definitely makes a killer more human, especially a vampire killer.

I loved your descriptive use of the “lone tear.” I was amazed that after the fourth time you used that type of emotional descriptor I didn’t find it tiresome or irritating. It really didn’t bother me that your descriptions were used multiple times. I mean, when your heroine cries so often you can’t help but repeat yourself with the silent tears and the hot splashing tears and so forth.

Your constant use of dialogue tags didn’t jerk me out of the story either. Your characters don’t just talk, they mutter, they sigh, they murmur, they demand, they scowl, they sneer, they drawl (even if they aren’t from the south but from Ireland), they talk blandly, they respond dryly, they reply sweetly.

I admit that this book hit some huge hot buttons for me. I don’t like dialogue tags. The characters end up getting mangled in my head. I think the names of the characters: Kane and Kendall are too Cute for words. I especially cannot stand crying heroines particularly when they are crying all of the time. I would think that someone who has lived for over 300 years and been exposed to the dregs of humanity would be able to keep her emotions in check. Finally, the world building was incomprehensible and your characters, particularly Kendall, had little physical vulnerabilities. It never occurred to me that she was in any danger from anyone – what with her special X-Men abilities. C- for you.