Fifteen years ago, I wasn’t reading category romances, so all the books that have recently been released in the Harlequin Treasury are new to me. I’m not reading with the rose-tinted spectacles of nostalgia. What I am doing is glomming backlists for some of my current favourite authors. Or, I thought I would be. But what I’m mostly doing is being disappointed that Old Skool category romances are, well, Old Skool. There have been some I didn’t finish (Sandra Marton’s ‘The Divorcee Said Yes‘) and some I wished I hadn’t bothered finishing (Anne McAllister’s ‘A Baby For Christmas‘). But then I started on your books. For me Graham’s books epitomize Harlequin Presents, complete with too-stupid-to-live heroines, alphole heroes, ludicrous plots and overwrought emotions. I know, I know, that Graham’s books ought to offend and irritate me in all sorts of ways. And yet I can’t stop reading them. 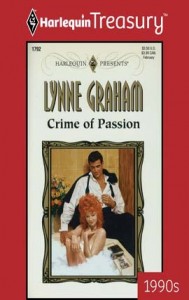 So it was very reassuring to find that 15 year old Lynne Graham books are no different from the newer ones. ‘Crime of Passion‘ begins with our TSTL heroine, Georgie, in a police cell in Bolivia with no money, no passport and no way of communicating with the Spanish-speaking police officer. Seriously, even in 1995 it wasn’t hard to pick up a Rough Guide before you got on the plane. Fortunately, she does know one person in Bolivia: Rafael Berganza. Unfortunately, he’s the man who broke her heart four years earlier.

If you’ve ever read a Lynne Graham (or indeed any HP), you don’t need me to fill in the rest of the plot. But just in case you haven’t, this is how it plays out: he calls her a whore, then abducts her to exact his revenge; she turns out to be a virgin so he is overcome with remorse and insists on marrying her. Then it turns out that they’ve both been in love with each other all along.

Part of me wishes that Lynne Graham would actually start looking up words in the dictionary before she uses them at random in her books. The other part of me loves giggling at expressions such as ‘plunging upright’ and ‘obliging the information’. That’s the same part of me that loves it when heroines have baths without locking the door. Oh, by the way, the cover depicts an actual scene from the story, with the right colour hair on the heroine. That would never happen in a modern HP. Other things that don’t happen in modern HPs: the hero smokes.

I don’t think this book will make it into my top ten Lynne Grahams. There’s just a little bit too much bogglement, even for me. Rafael is really very unpleasant indeed for the first half of the book and Georgie behaves like an irrational child for most of the book. There’s also a scene which I thought was heading towards forced seduction but was fortunately stopped by a phone call. But there are some things about it that I did like. I especially liked the way Georgie and Rafael fight. Their insults are never generic, instead they show just how well these two know how to hurt each other the most. I did wish that their fights could sometimes end without him kissing her, particularly since Georgie suffers from an unfortunate syndrome whereby a single touch from Rafael renders her body wholly beyond her control.

There are scanning errors in the book. My favourite was Rafael’s aunt, Tia Paola, who often appears to be called Ha. I don’t think the errors are much worse than current HP’s and they didn’t particularly drag me out of the story.
I can’t give this book more than a C- but I’ll be checking the other books of yours from the Treasury. I can’t stop myself.

Previous article: What Jia’s Been Reading, Week of August 16
Next Post: GUEST REVIEW: Harlequin Treasury Marriage on the Rebound by Michelle Reid