REVIEW: Don’t Look Down by Jennifer Crusie and Bob Mayer 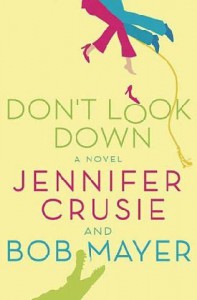 . I have pretty much loved all of them except for Strange Bedpersons

. But even you acknowledged that story didn’t quite work out as well as you had hoped. My favorite contemporary list includes Welcome to Temptation

. I have re-read your books several times. Even though I was a bit Krispy Kremed out by Bet Me, I still thought it was a good read.

When I read you were doing a collaboration with Bob Mayer, I was thrilled, but not because I like Bob Mayer’s works. But because you are such a good writer that collaboration can mean only good things. The whole – two heads are better than one – idea. I waited anxiously for the release of Don’t Look Down. I read the dueling blogs. I almost peed my pants in excitement when I saw the book for sale early at Waldens.

I spent Saturday and Sunday reading your books. That is the first signal that your book wasn’t working for me. I don’t remember the last time that I had to spend more than one night reading a book of yours. I had to literally force myself to finish the book. It almost became a DNF but I figured that I might as well read it and then sell it at half.com.

The plot is thus: Lucy Armstrong, a director of commercials, gets called in to finish directing a big action adventure. J.T. Wilder is called in as a military advisor. Armstrong’s ex husband is the stunt coordinator involved in shady dealings. Armstrong’s sister and niece are present. There is J.T.’s best friend and partner. Lucy’s assistant. The lead actor and actress. Yes, a cast of thousands. Readers need a cast list and post it notes to keep everyone straight. The movie script is a strange parallel for the book itself. It has no plot and big cast of characters with implausible event following implausible event.

I thought this would be a romance which was just stupid of me. I mean, why would this be a romance, just because every other offering by Crusie has been a romance and it is shelved in the romance section. I was expecting a fun and different type of suspense. I was expecting a good mystery. I was disappointed on all parts and won’t be buying your next collaboration.

I am sorry to see our relationship end like this. Drop me a line when you get back to writing the good stuff – without Mr. Mayer.

→ Jane
Previous article: REVIEW: The Taming of the Duke by Eloisa James
Next Post: Will Sony’s E-Ink device transform the ebook vista?