Some of your books I love and them some of them are like Blue Sage. This was your first book I was disappointed in. It’s a “bad boy” book and if that isn’t shoved down readers’ throats a dozen times in the first chapter the Pope doesn’t wear a beannie. 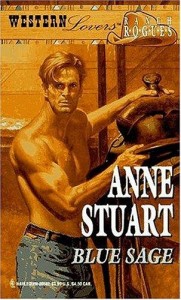 Charles Tanner, Jr is going back to the small Montana town where 15 years ago his Korean vet father opened fire on the July 4th celebrations and killed 15 people and wounded one. Guess who the one turns out to be. Yep, that’s right. The heroine. He doesn’t expect a kind welcome (remember, he’s the Bad Boy) and acts surly to one and all. With the exception of a few people, he’s treated like poison and acts surlier.

Ellie is the town saint. She survived the massacre and went through years of rehabilitation before marrying the Judge, a man about 40 years her elder, who wanted to be able to leave her all his money. She’s also a 31 year old contrived VIRGIN! Ugh!

Strange stuff starts happening around town. Stuff like the things that happened before Charles’ father went bonkers. Who could be doing it? Charles? His father? Some other lunatic in the small town in Montana. (What is it about wackos living in Montana? Is it something in the water?) Lots of confrontations with townsfolk later, the truth comes out. It’s not Charles but I’ll bet you’ll figure it out as soon as I did.

I’m beginning to think that Bad Boy romances are not for me. The only one that I’ve liked was The Return of Luke McGuire by Justine Davis. I get so tired of the poor misunderstood hero, the saintly heroine who sees in him what no one else does and the contrived plots whereby the townspeople can see him as Bad but in reality, the author doesn’t have to make him really be bad. You don’t cover any new ground and was hard to finish. I just didn’t really care anymore. C- for this one.