What Janine is Reading (and Listening to) in May of 2017

Pride and Prejudice by Jane Austen, performed by Rosamund Pike 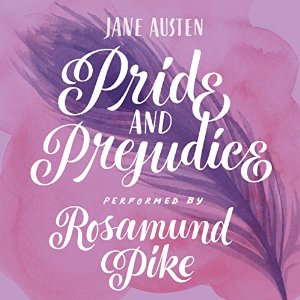 I’ve begun to make better use of my Audible membership, and my current listen is the Pride and Prejudice audiobook

performed by actress Rosamund Pike. Pike’s performance is delightful and especially wonderful when it comes to the novel’s omniscient narrator. The actress captures the irony and wit in Austen’s narration by employing a wry tone to great effect.

One potential downside for some listeners is that Pike shades the dialogue differently for each of the characters, and while most of the character voices are easy to listen to, a couple of them take a little getting used to. Mr. Collins is such a one—her interpretation of his voice includes pauses in his dialogue. On the other hand, Pike’s Mr. Bennett is marvelous.

I’m enjoying this P&P more than I have reading the book, or watching the miniseries with Colin Firth. Since I’m still listening to it, I can’t assign a grade yet. 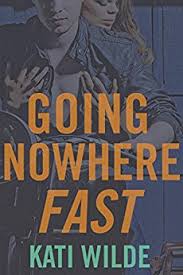 Aspen Phillips and her mother and brother have been poor since her late father’s cancer treatment put the family in the hole. But in college, Aspen befriended Bethany, a wealthy student who was raised by her older brother after their parents’ death. Bramwell Gage, Bethany’s brother, doesn’t take kindly to Aspen’s friendship with Bethany, but will do anything for his sister, so for Bethany’s graduation gift, he agrees to go on a road trip with the two women.

When Bethany skips out on the trip at the last minute to book herself into rehab, she asks Aspen to keep it secret from Bram. Bram smells something odd, though, and he offers to pay off Aspen’s mother’s debts if Aspen will go on the trip with him. He plans to text Bethany pictures of all the fun he and Aspen are having together, so as to goad Bethany into revealing where she is and why she decided not to come on the trip.

Going Nowhere Fast was recommended to me by three people in the space of one week, so take my unpopular opinion of its first third with a grain of salt.

Despite being a good person, Aspen rubbed me the wrong way. For good reasons, she’s hyper-aware of how she gets stereotyped as trash due to being poor and therefore doesn’t want to be indebted to anyone, but despite this, she accepts extravagantly expensive gifts such as a smartphone and a high-end laptop from Bethany and Bram. Wilde also over-explains Aspen’s each and every decision, and since it’s done in Aspen’s own narration, it makes her read as an overly self-analytical and defensive character.

Bram was a bit more interesting, though he was a jerk to Aspen on more than one occasion. I was interested in hearing more about how he stepped into the role of Bethany’s guardian while still quite young, but if it was explored, I didn’t get that far.

Going Nowhere Fast has been compared to Pride and Prejudice, so it probably didn’t help that I was listening to P&P at the same time that I picked this up. This book has none of the social satire and irony of Austen. I was unengaged by the romance and more interested in what was happening to Bethany off-page than in Bram and Aspen, so I quit after a hundred or so pages. DNF.

Wait for It by M. O’Keefe 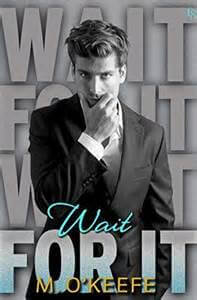 Tiffany is a formerly battered spouse with three young kids, while Blake is her husband’s brother. Back in The Truth About Him, Blake wrote Tiffany a check to stay away from his mother. Early in Wait for It, Blake realizes he misjudged Tiffany and tries to make amends and help her out, but when their attraction to each other crops up, he reverts to his previous pattern and tries to use money as a way to distance himself again. This nearly wrecks their budding relationship.

I initially skipped reading this novel because the book just prior in the series, Burn Down the Night, had some inconsistencies in the characterization and felt too angsty. Jennie’s B- review wasn’t quite enough to change my mind, but after reading and loving O’Keefe’s Baby, Come Back I decided to give Wait for It a shot.

After a slow first third or so, Wait for It revved up and thoroughly absorbed me. I would have liked to know more about Blake’s relationship with his dad, as this was the source of his money issues. I also wanted to understand how Blake rationalized that he would be able to compartmentalize a relationship with is sister-in-law.

Tiffany’s characterization was stronger and insightful in fascinating ways. I especially loved her consciousness of how motherhood had made it harder for her to view her body as her own. I loved her journey of her growing awareness of her own strength and survival ability.

On a smaller note, I was distracted by Blake’s surname, Edwards. I’m old enough to remember that the famous director of such classic movies as the Peter Sellers Pink Panther series and Breakfast at [… wait for it…] Tiffany’s was named Blake Edwards. Still, I enjoyed the book a lot, and found it emotional and moving. B.

An Unsuitable Duchess by Carolyn Jewel 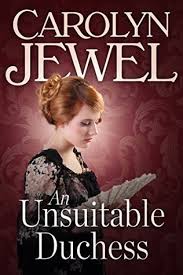 I enjoyed this novella, which takes place during a regency house party and regatta called the Dukeries Cup. The Duke of Stoke Teversault is a stiff, introverted man. Georgina Lark is an outgoing widow, on friendly terms with Stoke’s brother as well as with his brother’s friend.

Stoke has loved Georgina from afar for years but his taciturn nature makes it difficult for him to communicate that interest to her and he fears that his brother or his brother’s friend will marry her from under his nose. Georgina is convinced that Stoke dislikes her, despite the fact that he came to her aid when her husband died and she was in great need of support.

Beyond this backstory and set up, there isn’t much plot to this novella, just a series of meetings and eventually some sex scenes. In the hands of a lesser writer, it would be dull or clumsy, but Jewel writes so well that she makes even small interactions quite compelling and the sex hot. Nonetheless, I still wished the plot was a little more eventful, especially near the end, because I wanted to see Stoke’s romantic feelings for Georgina dramatized in a deeper way. B.

Vixen in Velvet by Loretta Chase 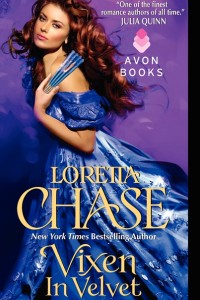 Miss Leonie Noirot and the Marquess of Lisburne meet while she gazes at his Botticelli painting, Mars and Venus. Leonie’s ankle is twisted and Lisburne carries her to her shop, then decides to pursue her—as a lover. Eventually, Leonie agrees to wager two weeks of her time against his Botticelli. The subject of the wager is whether Lady Gladys, a new client of Leonie’s, will be able to win a betrothal by the season’s end.

The marquess is also preoccupied with his cousin the poet Lord Swanton’s tendency to attract adoring-yet-dangerous crowds. Still, Lisburne finds time to flirt with Leonie, and though slightly conflicted, Leonie responds. But when the fortunes of Swanton and of Leonie’s shop are endangered and Lisburne and Leonie must combine forces, their feelings take a more serious turn, one that threatens Leonie’s heart.

I skipped this book after being disappointed in Scandal in Satin a few years back, but recently my acute hunger for a half-decent historical drove me back to Loretta Chase. Half-decent it was, with likable characters, witty dialogue, a relatively limited use of anachronistic language, and some lovely descriptions, such as those of Leonie’s fluttering dresses. But it still took me three times longer to finish than a book this length typically does.

The reason was the low stakes conflict that dominated the novel’s first half. Yes, Lisburne staked his Botticelli that Lady Gladys couldn’t be transformed into a swan, but he was privileged, wealthy, and it wasn’t like the painting wouldn’t go to a good home if Leonie did help to make Lady Gladys popular. Yes, Leonie staked her virginity, but she was 21, mature enough to handle an affair, very much attracted to Lisburne, and her main concern wasn’t heartbreak, but the time that an affair would take from her work. Thus, neither of them stood to lose much. It was also clear from the beginning who would win, so there was little suspense and not enough reason to pick the book back up whenever I set it down.

It got more engaging around 42% in, when a turn of events put Swanton’s reputation, Leonie’s livelihood, and both characters’ hearts on the line. Even after that, I was a little distracted by the improbability of three shopkeeper sisters marrying into the highest circles in the aristocracy and then continuing to run their shop, and by a dropped plot thread. The epilogue, which only featured side characters, felt a little long, too.

Despite all this, I enjoyed the fine writing, witty dialogue, and the wistfulness and longing in Leonie and Lisburne’s brief separation. Unlike Suzanne, who didn’t understand what Leonie saw in Lisburne, I completely got his appeal to Leonie. Leonie and Lisburne’s rapport stemmed from like recognizing like. They were two of a kind—two stylish, witty people with slightly amoral tendencies to scheme that they directed toward positive goals. Each knew and appreciated that the other was onto them and got them really well. C+/B-.