After I finally got around to reading your first book, “The Raven Prince,” I was hooked on your writing. I knew I had this book and [gloating] “The Serpent Prince” [/gloating] already on hand. Well, now that I’ve finished this one I’m starting to panic. Only one book left. “Gah!” as a friend of mine says, write faster Mrs Hoyt. Write faster. 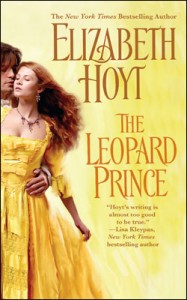 Much has been said about how your books are more focused on the characters than fussing about historical facts and I did admit that usually this drives me nuts but how in your case, I don’t care. And I still don’t yet I’m happy to say that I find Harry and George’s story more realistic than first book. In the mid eighteenth century, I find it easier to believe that a lower class man and an upperclass woman could wed and find happiness than perhaps in, say, a Regency set novel. And the fact that both are aware of the societal issues they’ll probably face and that both seem happier living in the country than “doing the pretty” in London helps as well.

One thing that stuck me immediately is how the way George acts seemed “right.” The way she would show up at Harry’s cottage and just waltz in, pick up his carved animals, question him, kept him waiting when he first applied for steward’s job — all seem like something an upperclass woman would do, unthinkingly — she’s the employer and he’s the servant. While Harry’s worried about 1) what people will think of him and of her, 2) that she’ll be injured if Granville goes after him while he’s on Granville’s land questioning the farmers about their poisoned sheep and 3) finding shelter after the carriage accident and making sure George is warm. All things that a servant would do and worry about.

Other things I loved: the bit in the church when discussion turned to crop rotation as all waited for George and Harry to “talk,” that the travel distances and amount of time needed to go from Yorkshire to London and back seem right and far more realistic than the two day jaunts from London to Gretna Green I’ve read in other books. I
like that Harry wasn’t suddenly elevated to gentleman status by long lost family turning up and claiming he was stolen by gypsies or some such rot. The sex scenes were hot and I love that Harry thinks George is beautiful just as she is. And thank you for not trying to pretty up Harry’s mother. The vindictive shrew in me rejoiced that old Granville suffered before he finally headed off to hell.

Alas, I also have a few niggles. I would have liked the lower class farmers and others in Yorkshire to have more realistic regional accents and dialect. It’s not hard to do if you watch a few episodes of “All Things Great and Small.” But at least you didn’t use Cockney for them as some authors do who seem to feel that’s the universal lower class accent in England. The identification of the sheep poisoner was a bit of a let-down since trying to incriminate Harry with carvings seems a little beyond Janie’s mental capabilities. And as Jane mentioned in her review, George does a few things that seemed out of character for her and sent her off in the direction of a Martyr Heroine.

But overall, I was almost as happy with your second book as I was with the first and am psyched for “The Serpent Prince.” Now I must go hold our arc of it in my hands and happy dance a bit. B+

You can purchase The Leopard Prince at Amazon or Fictionwise ($4.03 with buywise membership and micropay rebate) and BooksonBoard ($3.89)