The Last Wish: Introducing the Witcher by Andrzei Sapkowski 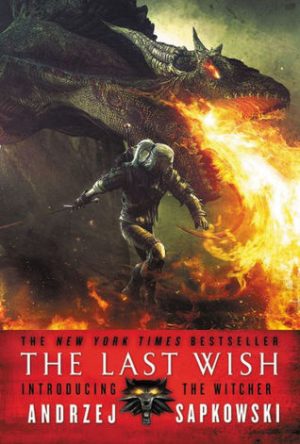 Geralt of Rivia is a witcher. A cunning sorcerer. A merciless assassin.

And a cold-blooded killer.

His sole purpose: to destroy the monsters that plague the world.

If I had not “met” Geralt of Rivia before, I would have hesitated starting this book based on his description. See while I am more than interested in “gray” characters, cold blooded killers are so not my cup of tea in the vast majority of the books I have read.

Luckily I have “met” him before. I read the first three or four books in this series a long time ago, probably two or three decades ago, in Russian translations. I remembered very little, so little that I was not even sure that I had read this book before (now that I finished, I think that I did). The only title I remembered was “Blood of Elves”. I also remembered that I really liked Geralt. I have not seen the Netflix show based on the books yet, but I was curious to see if I enjoyed meeting him again.

The blurb is actually not that bad. Geralt does kill monsters for money, but what was way more interesting for me is to see whom and why he does not kill and saves from all kinds of misfortunes. Basically he is a guy with a moral code and while he admits that he wrote his own (as most witchers do if I remember his comment correctly), I liked his code very much.

This book is basically a collection of short stories which show Geralt’s various adventures as well as stories of Geralt recovering from an illness (when the book ended, I still was not sure if these were more mental or physical) in the monastery and telling those stories to someone in that monastery.

Of course the whole book has plenty of beings from folklore (Slavic mostly, but not only). I love contemporary takes on fairy tales and some of the stories are not even the complete retellings; it is as if the writer truly took an inspiration from the original tale and took it in a different direction.

What character may have been inspired by Snow White for example? I am telling you, for me this was quite an unexpected take.

I am not sure if I completely enjoyed the structure of the story. I don’t require my fantasy to be a non stop movement and fighting, but the scenes of Geralt in the monastery were strange. I mean I get that he needed to recapture his balance, but I also felt like the author tried to make him a more philosophical character than he really was, if that makes sense.

I was pleased that I liked him as much as I remembered from my youth though and will probably read another book in this series soon. B