REVIEW: The Lady Next Door by Laura Matthews

“Marianne Findlay lives next door to the Earl of Latteridge’s York townhouse.
Though she has never met him, it was his mother who sealed her fate years before–and drove her from polite society. Now she and Aunt Effie take in boarders and live a modest life, which is soon disrupted by the handsome earl, his scapegrace younger brother, his charming and determined sister–and that vengeful mother of his.” 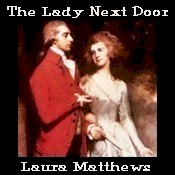 I first noticed this book at Belgrave House and loved the cover. Then I started to look for a print copy (this was in the days before I had my ereader and could easily read ebooks on it) and was confused since the OOP Signet paperback edition makes it look like a Regency. WTF? The people at Belgrave did you much better than the art department at Signet.

Marianne Findlay was once friends with the Earl of Latteridge’s sister but that relationship along with Marianne’s place in Polite Society was ended by an incident over which she had no control. Now she and her aunt live quietly in York. At least until she meets the next generation of the Latteridges and gets pulled into their lives. And into the sights of the gentlemanly but very determined Earl.

You write a delightful, quiet, elegant book. Readers looking for flashy, high intensity drama, this one isn’t for you. We also get two very nice, albeit short secondary love stories (which I would love to have seen fleshed out a little) and a cursory tertiary love story of older lovers reunited. Which leads to one of my few problems with this book. It’s a shorter one (220 pages) and the main story gets a little short changed due to all the other things going on. The things are interesting and I cared about all the characters but I wanted to see more of the Earl and Marianne (though what we did see was delightful).

I like how the book stays true to the norms of the day and how the characters deal with their problems in realistic ways. This is my second book of yours and now that I know your style, I’ll be looking forward to more. In paperback, this book is OOP but it’s now available in digital formats. B