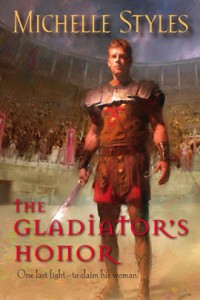 After years of Harlequin Historicals that made me think the only past acceptable for romance authors to write about was the Regency time frame, we finally (finally!) seem to be getting more of a range of eras. Praise Him (or Her, if that’s your preference) from whom all blessings flow. When I learned that there is a HH set in Caesar’s Rome and which has a fairly decent cover too, I was out the door to Waldenbooks.

Valens the Thracian is used to bored Roman matrons giving him the eye. So when a young woman makes eye contact with him at the baths, he assumes she wants an afternoon tumble. Julia Antonia didn’t realize that the curiously familiar man had any such ideas and quickly tries to set him straight. They part only to meet again when Valens arrives at her father’s house. To allay senatorial fears that he’s building a private army, Caesar has decided to house his gladiators amongst his clients and extended family and Valens has been quartered with the family of Julius Antonius.

Julia’s horrific former marriage has made her wary of a men in general and a second marriage in particular. But Valens appears to be a different kind of man, despite the fact that his life is one of violence and death. She feels safe with him yet both know that since Valens is a slave, any future they might wish for would be a scandal that would bring shame upon not only Julia but also her family. Their one chance lies in the great games being given by Caesar in honor of his father’s death. If Valens can earn his freedom, he might aspire to Julia’s hand despite the dishonor of his past life.

I like the fact that history is more than just wallpaper (or in this case a wall fresco) in the story. I do wish that you’d worked some of it in a bit more seamlessly though. Lots of facts are explained to the reader by having various characters spell them out to each other. It’s like me telling Jane, “I’m going to McDonalds, a restaurant which serves burgers, fries and milkshakes.” Jane already knows what McDonalds is and there’s no reason for me to tell her what she would already know.

Valens’ current life is also based on a big misunderstanding. One which he’s had plenty of time to rectify but which stubborn pride forbids. His will to live kept him alive when he was sold into slavery but now he’s too prideful to work out his problems and avoid the risk of dying in the arena? I was even more disbelieving after he met Julia and began to dream of marrying her.

I appreciate the fact that you haven’t made Julia a 21st century woman in a gown and stolla. Her past life and experiences influence how she acts now. She does grow in strength throughout the book and that growth ebbs and flows realistically rather than her turning into Wonder Woman all of a sudden. But she’s a bit more meek than I like my heroines. She might be an interesting character study but I just couldn’t warm to her. And I lost count of the number of times when she thought she should leave Valens’ presence but “couldn’t make her feet move.”

You do make your characters live by the rules and conventions of the day. Slavery and the games were facts of life and everyone accepts them. No one questions whether or not they should own slaves or worries about the effect of the violent games on Roman youth. I had to laugh at the fact that figurines of the famous gladiators were sold to the faithful just as action figures are made today. I guess some things never change.

While I enjoyed reading about something other than Regency Dukes who spy against Boney, I can’t really give this one more than a B-.

→ Jayne
Previous article: REVIEW: Marriage by Design by Lynn Michaels
Next Post: Non Sequitur of the Week: What I Need after the books I read last week.