Review: You and Me by Tal Bauer 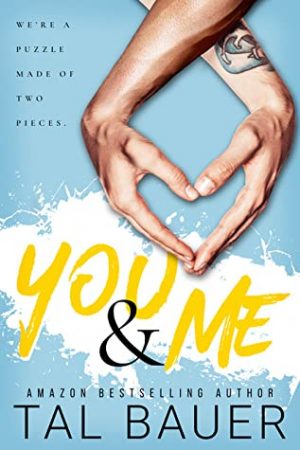 We’re a puzzle made of two pieces.

Landon Larsen is the envy of all the dads in Last Waters, Texas. He’s cool, confident, and put together. He and his son—the high school’s all-star quarterback—have the perfect father-son relationship. He’s such a Super Dad, it’s almost sickening.

I’m not cool, or confident, and my relationship with my son couldn’t be worse. He’s barely speaking to me, and a year after my wife died, we’re both clinging to the wreckage of our family.

Landon’s son and mine are best friends and—of course—Landon is the football Team Dad. And though I know nothing about football, Landon convinces me to volunteer to be closer to my son. Volunteering might give him and me a chance to rebuild what’s broken between us. Now I’m spending all my free time with the team—and with Landon—and the more we’re together, the deeper our friendship grows. My son is opening up, too, little by little. I think I’m getting him back.

I’m head over heels for Landon.

I’ve never been attracted to men in my life… until him. Landon draws me in without even trying, and the harder I fight this, the deeper I fall.

Crushing on my son’s best friend’s father must be my biggest parenting failure ever, but I can’t get enough of Landon. Falling for him puts each fragile moment I’ve rebuilt with my son at risk. What would he think if he knew I craved his best friend’s dad? I’m playing with fire, but I can’t turn off these feelings Landon has unlocked inside of me.

Of course, a guy like Landon could never fall for someone like me. It’s pointless to even imagine we could be something together.
So why did I just kiss him?

You & Me is a single dads, friends-to-lovers, bi awakening MM romance, full of dads and their exasperating teenage sons, high school sports shenanigans, and #FoundFamily. Come for the epic love, stay for the forever feels..

I got this book on KU.

I have read a couple of your romantic suspense books and frankly had no interest in ever reading anything else, but DA commenter Eliza recommended this one and I figured why not. Overall I am happy I have read it even if books which have romance only as the primary storyline more often than not take a back seat when I am choosing the next book to read. But occasionally I am in the mood for those and this certainly was a sweetheart of the book with romantic feels “a plenty.”

I cannot say that I am very impressed by the blurb though. Oh, it is not misleading in any way, but as far as I am concerned it is way too long.

The blurb is a monologue of one of the main characters – Luke. As the blurb tells you, he and his seventeen year old son Emmett are having a relationship crisis after his wife and Emmett’s mother died a little bit over a year ago, which is completely understandable, but very sad. Emmett is on the football team and that seems to occupy all of his free time. Despite not knowing much about football, Luc decides to volunteer for the team , mostly hoping to repair the relationship with his son.

I hope I am not revealing any significant spoilers ( and he is rambling about it in the blurb anyway), But Luke also meets another dad while volunteering for the school football team, who becomes the love of his life.

I really liked the development of their relationship, which was also Luke’s coming out story and of course him and his son becoming father and son again. I was very impressed how the writer basically hooked me up on such simple plot. The men had great chemistry as friends and I enjoyed seeing them doing volunteer work for the football teams and interacting with their sons. But they also had great chemistry as two people falling in love. It was overall a very enjoyable and romantic journey.

Here is an example of their interactions:

We ordered for our kids and then bundled back into Landon’s BMW. “Crap,” I said as he passed a 7-11. “Can you swing around? I need to pick something up.” Landon parked me at the front door of the mini-mart ten seconds later. “I’ve got to get milk for Emmet,” I said, unbuckling my seat belt. “Protein shakes?” “It’s unbelievable how many of those he drinks, and how much milk we go through.” “I looked into getting a cow once. I thought it might be cheaper to build a barn in the backyard and make Bowen milk it every morning.” Landon pulled out his wallet and passed me a five. “Can you grab a gallon for Bowen, too?” “Of course. But tell me more about the cow. That’s a brilliant idea. Would it work?” “It was the cost of feed that ruined my plan. It would be like having another teenager in the house.”

“Maybe if we went halfsies? Split the milk between our boys?” My cheeks ached as I moved through the mini-mart. What was this I was feeling? I was goofing around with Landon, and it felt good. Real good. We made it back before the end of practice, in time to catch the last few minutes of the junior varsity scrimmage coached by Bowen, Emmet, and Jason. According to the scoreboard, the defense was formidable—a brick wall—and there had been no points scored. Good job, Em. Landon and I waited for Emmet and Bowen by the end zone while the players filed out. A few stayed back to ask questions, and I got to see Emmet in coach mode. He wasn’t effusive or gregarious, but he was patient. Focused. Intense. And he gave a flicker of what could have been a smile to Bowen when he clapped his friend on the back.

I also really appreciated that both men acted as adults when they may have had a conflict in the making between them. I liked that they communicated with each other and yes, talked about things rather than stop talking and start acting very angsty without convincing reasons.

I may have graded this book even higher, but I would have liked to see more positive women characters. Sorry, Annie had very few lines and Riley was not really on page in the present time and I obviously did not miss her on page (yes, I know the writer gave us a reason why she was the way she did, but it was *horrifying* for me to see how much she hurt both her husband and her son) and Bethany was okay, actually probably the most balanced supporting character, but still with very few appearances. And that’s about it.

I get that Bowen and Emmett were super busy and we don’t know anything about their sexual orientation, but no girlfriends for either of them? Obviously it is writer’s choice. At the end of the story we meet Luke’s dad, but his mom is no longer there. So basically, half a point docked for what I felt was very minimal presentation of women in the story. I am not grading a story I wanted to see, I am saying that for this reason the story on the page was lesser to me than it could have been otherwise.