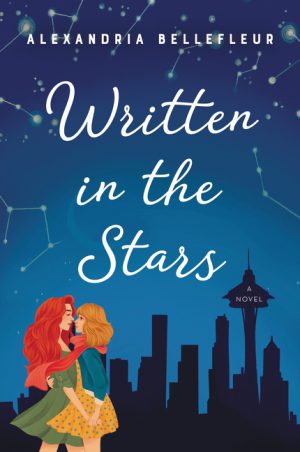 With nods to Bridget Jones and Pride and Prejudice, a charming #ownvoices queer rom-com debut about a free-spirited social media astrologer who agrees to fake a relationship with an uptight actuary until New Year’s Eve—with results not even the stars could predict!

After a disastrous blind date, Darcy Lowell is desperate to stop her well-meaning brother from playing matchmaker ever again. Love—and the inevitable heartbreak—is the last thing she wants. So she fibs and says her latest set up was a success. Darcy doesn’t expect her lie to bite her in the ass.

Elle Jones, one of the astrologers behind the popular Twitter account, Oh My Stars, dreams of finding her soul mate. But she knows it is most assuredly not Darcy… a no-nonsense stick-in-the-mud, who is way too analytical, punctual, and skeptical for someone as free-spirited as Elle. When Darcy’s brother—and Elle’s new business partner—expresses how happy he is that they hit it off, Elle is baffled. Was Darcy on the same date? Because… awkward.

When Darcy begs Elle to play along, she agrees to pretend they’re dating to save face. But with a few conditions: Darcy must help Elle navigate her own overbearing family over the holidays and their arrangement expires on New Year’s Eve. The last thing they expect is to develop real feelings during a fake relationship.

But maybe opposites can attract when true love is written in the stars?

I bought this book because I read a review in Washington Post. it promised a light homage to Pride and Prejudice and a romantic comedy. Overall I really enjoyed it.

First and foremost, please note that homage to “Pride and Prejudice” was *very light* indeed, which suited me just fine. I like seeing a sign of inspiration by the classic in the modern work, but I don’t care for the thinly disguised fanfiction being sold as an original work (no I have nothing against fan fiction, I love it, yet I would have objected to paying eleven dollars for fan fiction, so I am glad that this book was not one).

The blurb gives you a very detailed set up. Elle and Darcy’s blind date does not end well. But then, to get her kind but very persistent brother who wants to take care of his older sister’s lack of personal life off her back, Darcy decides that she was going to pretend to have a relationship with Elle for couple of months and then break it off. Mind you both women felt a spark between them even when they felt that date was a catastrophe, so it does not take all that long for Darcy to convince Elle to help her. Of course we all know that fake relationship in romantic comedy does not stay fake for too long.

I typed up and then deleted the sentence that Elle and Darcy realize that they have a lot more in common than they thought at first. No, they do not have a lot in common, but they still find enough to *like* in each other to build a fragile connection upon. Elle may have left graduate school which would have given her a permanent career – maybe not in the same area that Darcy had, but which have given her life some stability, but as Elle says she has no desire to self destruct her life. She just wanted to find a job she would like and astrology gave her that and now she and her friend and business partner Margot seem to break through to the new business venture which may bring them more financial stability in addition to the satisfaction of working in their chosen field.

Elle is funny, but Darcy also has a dry sense of humor and their exchanges often made me giggle if not laugh out loud. Granted Elle was more sparkly, but I thought their personalities played off each other very well.

Elle gawked. “That’s cunning. That’s . . . that’s . . . Slytherin.” “Excuse me?” “Slytherin.” Elle’s jaw dropped. “Oh my god. Don’t tell me you don’t know your Hogwarts house. Pottermore? The Sorting Hat Quiz?” When Darcy stared, Elle groaned and covered her face. “You don’t do social media, you don’t believe in astrology, and now you don’t like Harry Potter. On behalf of our generation, I am offended, you rock dweller.” Darcy scoffed. “I do not live under a rock. I know what you’re talking about, I was choosing to ignore you because your assumption about me was baseless.” And not that it was any of Elle’s business, but Darcy was a Ravenclaw.”.

Supposedly the biggest difference between them is that Elle wants to find her soulmate and Darcy does not believe in true love anymore. Of course we know that this could all change in the romantic comedy. Stay tuned to see if it does. :)

I did like how both of main characters interacted with each other. New couple (at the beginning they did not even think of themselves as a real couple yet) is trying to figure out the beginning of the relationship while issues between them happening because of who they are, not because plot of the story demands the characters to make weird moves unsupported by their personalities .

I thought the sexual chemistry between them was great too. I did not like the mandatory break up. Not even why it happened, but how it happened. Of course the reactions of the character made sense to me – what I did not like is that it was basically presented as miscommunication while it really was not, it would have showed up and tested their relationship sooner or later anyway.

But overall this had tons of potential and I enjoyed it.