REVIEW: Worth Fighting For by Molly O’Keefe

Beware, there are spoilers for the series in the review itself so if you want to read The Mitchells of Riverview Inn without being spoiled one iota, please don’t read this review: 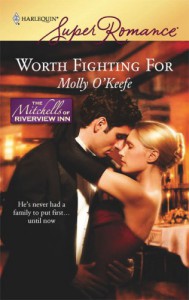 Worth Fighting For brings together the loose plot threads involving Iris and Patrick, the mother and father of Gabe, Max, and yes, Jonah. The complicated backstory to Iris and Patrick goes something like this. Thirty years ago, Iris left Patrick. She suffered from severe post partum depression. It became unsafe for the children to be around her so she left. It broke Patrick’s heart but he managed to raise his two boys. In the early days, Iris wrote twice to come back and Patrick refused. He was hurt, afraid, and thought that perhaps they were all better off without Iris. Iris was pregnant when she left and never told Patrick of his third son, Jonah.

Iris wants to reconnect with her sons she left behind, and perhaps, even Patrick, from whom she has never divorced. Jonah would do anything for his mother including spending a few days in the Catskills meeting his father and unknown brothers even though he loathes them, sight unseen.

Daphne Larson is the local divorced mother of one precocious girl. Gabe and Daphne dated briefly in Baby Makes Three. She wants to be remarried and she wants to have more children but she and her husband just fell out of love. He was a little irresponsible but mostly they didn’t work as a couple anymore. The first time Daphne lays eyes on Jonah, her hormones go into overdrive. Upon second look, however, she recognizes Jonah as “The Dirty Developer.” To say that the two get off on the wrong foot is an understatement. Daphne is an organic farmer and she’s personally affronted by a man who builds houses for families on dirty land. She cares for the Mitchells and just knows instinctively that Jonah is a man who will hurt them all.

Jonah comes to the Catskills because he promised himself he would never say “no” to his mother. He loves her too much and she asks for so little. Befriending the Mitchells, however, is something that he refuses to do and he flat out tells Patrick this:

"Listen-Patrick," Jonah said, his voice cutting him like a knife. "I’m not here for a family reunion. I’m here because my mother asked me to be here. And-‘" his voice grew slightly meaner, mocking "-‘you probably don’t remember this about my mom but she doesn’t ask for much. So, I’m here for her. I don’t care about your sons-‘"

"They are your brothers," Patrick insisted.

"They are no one," Jonah said. "You are all strangers and you’re going to stay that way."

I appreciated the hostility rather than the instant connection, even between the brothers. Gabe, for example, has always been very resistant to his mother’s re-entry into their lives and he’s very protective of his father. As Patrick noted, Jonah and Iris were a unit to which he wasn’t vital. He and his sons were a unit. The melding of the units, particularly when it involved hurt feelings, big egos, and very protective feelings was not going to be smooth. Gabe wanted to smash Jonah’s face in and Jonah wanted to return the favor. Jonah is feeling particularly vulnerable:

"Were you unhappy?" he asked, blurting out the question that had been churning in his brain since he saw her smile at Max and Gabe. "All those years with me-did you wish we were with them?"

I actually thought Jonah’s attraction to Daphne would have made more sense in the context of it being a way for him to escape from the personal drama and maybe that is what it was intended to be but I would have liked a verbal cue. Jonah seemed fairly self aware and it would have been consistent for him to internally recognize that thinking about, lusting for Daphne was a release.

Daphne is torn between how hot Jonah is and how bad he is for the land. Of course, finding out that he isn’t the dirty developer that papers made him out to be makes it easier to just focus on how hot he is. But then Jonah, like all the men in Daphne’s life, doesn’t have much staying power. He is in the Catskills for a short time and even if he does seem to like her and her daughter, Daphne tends to be the type of woman who men leave.

I thought Daphne’s own personal conflict seemed forced. Her feelings toward her ex husband didn’t seem consistent with how they were portrayed in Baby Makes Three. I wasn’t sure what Jonah’s initial attraction toward Daphne was. I liked her, but he didn’t know her at all, other than that she was an organic farmer who thought he was a dirty developer.

Jonah falls for Daphne, but he can’t make the commitment to be with her because that would mean giving up all the anger, resentment, and hate he had for his father. How was it possible that it took more courage to choose to be happy?

As always, the prose was excellent and the characters were full bodied. I also enjoyed seeing Iris and Patrick reconnect after years of heartache, mistakes, and misunderstandings between them. The main problem with this book is that I think it is hard to have read in isolation. Much of the plot and character arc depends upon a reader’s intimacy with the first two books in the Riverview Inn series. I think it’s a well done series and I don’t regret a minute I spent reading the three books, but others might find it difficult to start with this one. B

I believe I purchased this book but I can’t actually recall. It may have been provided by the publisher. The Amazon Affiliate link earns us a 6-7% affiliate fee if you purchase a book through the link (or anything for that matter) and the Sony link is in conjunction with the sponsorship deal we made for the year of 2009. We do not earn an affiliate fee from Sony through the book link.