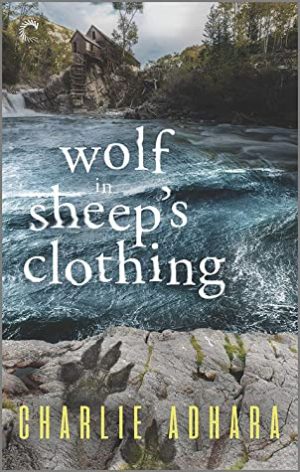 Agent Cooper Dayton and his partner, Oliver Park, are going undercover—at a retreat for couples who need counselling. They do say the best cover story is one that’s close to the truth…

Agent Cooper Dayton is almost relieved to get a phone call from his former boss at the Bureau of Special Investigations. It means a temporary reprieve from tensions created by house hunting with Oliver Park, his partner both in work and in life. Living together in a forever home is exactly what Cooper wants. He’s just not keen on working out the details.

With a former alpha werewolf missing, Cooper and Park are loaned to the BSI to conduct the search at a secluded mountain retreat. The agents will travel to the resort undercover…as a couple in need of counseling.

The resort is picturesque, the grounds are stunning and the staff members are all suspicious as hell.

With a long list of suspects and danger lurking around every cabin, Cooper should be focusing on the case. But he’s always been anxious about the power dynamics in his relationship with Park, and participating in the couples’ activities at the retreat brings it all to the surface. A storm is brewing, though, and Cooper and Park must rush to solve the case before the weather turns. Or before any more guests—or the agents themselves—end up dead.

I confess that when I am reading a series that I love, especially a romance series, especially a romance series that involves the same couple, I get more nervous with every new book that appears. I get more nervous especially when I loved the previous books in the series, as I did your books. So many romance series become repetitive fast because authors (for me) fail to find believable reasons for the tension between the characters, but determined to continue the series and I end up shaking my head and abandoning the books eventually.

I am happy to report that I ended up loving this book just as much as I did previous one (my love for these books so far at least seems only increase.) I would have been perfectly happy for the previous book to be the last one, because I thought Oliver and Cooper ended up in a very good place and learned a lot about each other.

Turns out that the author had plenty of layers to peel off the guys while giving them another case to investigate. As the blurb tells you, our heroes go undercover to the werewolf couples resort (although werewolves with human mates are also allowed to come) to investigate a missing of the former alpha werewolf. I confess that when I was reading the set up I rolled my eyes a little bit. I thought that we already went through Cooper feeling out of place among werewolves and him and Oliver having communication problems.

I really should have known better and trusted this author better by now, because just as book three (for me) was seemingly about the characters refusing to communicate and Oliver behaving like an idiot for a large part of the book. It really went deeper than that — this part of the story really did not repeat much of anything, but just went deeper. Cooper keeps learning so much about himself and Oliver. And Oliver is dealing with his issues, but it is not a repeat of him just finding the courage of sharing his past with Cooper.

I also really appreciated that the guys did not lose their sense of humor and more than once their exchanges made me smile if not giggle.

““Why does it feel like all our cases send us to the gloomiest places off the map?” Cooper asked as they drove the endless, winding road into the mountains.”

““One day, we’ll get assigned a nice, sunny beach murder,” Cooper said. “And it will be wonderful.” “What nice, normal goals you have,” Park murmured, slowing as they approached a subtle wooden sign to the side that simply read Maudit Falls. “Is this it?””

It is not as if they did not argue in this book, they did, but I really thought that they overall communicated better and kept fewer/no secrets from each other.

Something happens to Cooper during the course of investigation and he has an impulse to not share all the details with Oliver, but instead shares almost everything. Actually he omits one detail, but does not keep it to himself for too long and it made sense to me why that detail was not shared right away.

“Cooper touched his scars absently, and the thick ropes of raised tissue tingled. He didn’t quite trust himself right then. But he did trust Park. His partner. The person he knew he could always rely on. Cooper quickly told Park everything he’d noticed—or thought he’d noticed—including the sharp, shoving pain in his ribs, the weird jumping thing of Jimmy’s face, and the hateful look Nielsen had given the white wolf as she walked away. The only thing he left out was his own… momentary confusion in the water. Obviously Symer hadn’t really been there.”

The insecurities both men still have they also manage to share with each other and I really thought their relationship became even stronger. As I type this review I wonder if other readers may think that guys talked too much about their feelings. I really did think that the author stroke a nice balance between them working their case and manage to discuss stuff with each other, but opinions differ of course.

I especially liked where the author went with the question who is alpha in the relationship. As readers of the series know, a rather unexpected thing (for me) happened in that department at the end of book three, but just as with so many things I loved that this was explored in more depth and developed in an interesting way. I won’t deny the possibility though that the reason I liked it so much was because I don’t always care for rigid roles between werewolf mates, so maybe I just experienced confirmation bias or something like that :).

As always Oliver and Cooper investigated the murder/murders . I was trying to figure out what I thought about the mysteries in this book. I don’t find the mysteries very simple or very hard, but I always have one issue or another, like in this one I just had no idea how I was supposed to figure out the culprit. I mean red herrings were all there, but the arrows pointing at real villain? I just did not see it. I came to the conclusion that this is a perfect example of mystery being a good backdrop for romance development. The guys are given plenty to do and investigate, but I don’t know if I would have been too interested in reading these mysteries if the romantic element were absent.

I had seen some misspelled words and couple of missing words, so this always makes me nervous thinking whether I missed more, but I just loved the story so very much.