REVIEW: What a Scoundrel Wants by Carrie Lofty 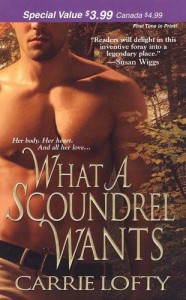 I love finding new authors but will admit to a dread of reading sophomore efforts. What if the first book I read is a fluke? What if it’s the only one by an author I’ll ever like? What if I anticipate a second story as good as the first and all I get is dross? Reading a first novel is easy. It’s the follow up that sometimes bites me in the ass. I’m happy to say that after finishing “What a Scoundrel Wants,” (and oh, this title) my ass is just fine, thanks.

How many books/poems/ballads have been written about Robin Hood, Maid Marian and Will Scarlet? Tons but there’s always room for another good one. And especially one that manages to approach these characters in a different way and with a new eye. Here we have Will on his own, estranged from Marian and with Robin away in France for three years fighting with King Richard. There’s a family connection between Will and Robin that hasn’t sat easily on either one and though I was initially loathe to see Will acting as he does, his need to distance himself from Robin, to be his own man and “make it on his own terms” makes sense with the background you’ve given him.

Fortunately for Will and Meg, his innate decency rises to meet the lessons drummed into his head by Robin and he turns away from the path he was headed down when a confrontation goes wrong. Though by the time he ends up rescuing Meg from the soldiers, he probably wishes he was in reality the scoundrel of the title. As he tells her, Meg makes it very difficult for anyone to care for her even if she’s not mad at him to begin with. And Meg is very mad.

She’s on a rescue mission to save her sister and this lout who’s dragging her through the woods is the very one who delivered Ada to the Sheriff of Nottingham. At this point I’m wondering if the King made all applicants for that position fill out a resume or prove their evil bona fides a la the scene in “Blazing Saddles.” This current Sheriff is a fine addition to the oeuvre as well as being one damn, softly spoken embodiment of terror. It’s not the ones who foam at the mouth I worry about so much as the ones who smile as they play with their victims.

When Meg and Will aren’t hissing at and fighting each other, they’re glaring and preparing for their next encounter. But instead of my eyes glazing from boredom as I watch two characters with less sense than two bars of soap stomp their feet like children in a sandbox just to pad the page count, I enjoyed watching two evenly matched people work out their individual issues while falling in love, saving the day and vanquishing the bad guys.

And they do have issues. Will has to learn to finally stand on his own and be the kind of man he’s admired in Robin. He also has to learn what true love is and, more importantly, isn’t. That you can’t marry someone for the wrong reasons and hope it’ll all work out. Especially when that person is Meg. Meg has enough of her own troubles including a slime ex-lover and a sister who needs to grow up herself. She’s been betrayed by those closest to her and is looked on with suspicion by almost everyone else. I can understand her retreats into herself and the walls she raises against the world. What I like is that these two come to know not only each other, but also themselves by the time the story is done. You don’t let them off easily but they’re so stubborn that nothing short of what you put them through could make me believe in a HEA in so short a time given their backgrounds.

That being said, I was beginning to get a little weary of yet one more obstacle for Meg and Will to surmount. Ambushes, outlaws, evil Sheriffs and their evil henchmen, witch hunts, escapes through some pretty awful places, house burnings, family quarrels, castle storming and enough injuries to fill a large city emergency room – the list just seemed endless. But I do appreciate that you appear to have grounded the pertinent details of the plot in historical fact, even if I felt compelled to google a few things.

The story is also a good mix of emotion and adventure. Those looking for daring do will find it as will people who want some raw, searing encounters between two people fighting to find love. I wouldn’t have been happy without either and I think you balanced the two very nicely. Right now, I’m not sure I can believe that Ada is redeemable as it appears your next book will attempt to do but if you can make me believe that two such prickly people as Will and Meg can work out their problems and find love, then just maybe. B+