REVIEW: We Won’t Feel a Thing by J.C.Lillis 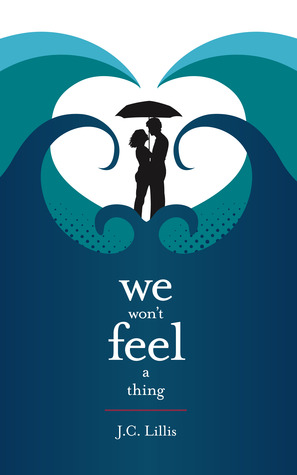 Seventeen-year-old best friends Rachel and Riley are in forbidden love.

Their situation’s. . .complicated. And their timing couldn’t be worse—in just one month, he leaves for California and she starts college in New York. The absolute last thing they need is a reckless secret-love confession mucking up their perfect plans.

Desperate for a quick fix, they sign up for WAVES, an experimental self-help program led by mysterious scientist David A. Kerning. He swears his Forbidden Love Module can turn passion back to safe platonic friendship in “six easy steps.”

But when you arm yourself with an untested program, side effects are unpredictable.

And sometimes when you fight love—love fights back.

“Once there was a boy and a girl with a kingdom in their room. The kingdom was located on the second floor of a white house with black vinyl shutters, the quietest house on a quiet Nebraska street. It was relatively small for a kingdom—a 16 x 24 room, one side painted blue and the other red—but for the eight years they had lived together, it had suited all their needs.”

I think based on the first paragraph alone, one can see that story promises to have at least some themes that recall fairy tales. Rachel has lived with Riley and his parents since her grandfather died, when she was just nine years old. As the blurb tells you, the kids are almost grown now and they are studying and working to fulfill their plans for the future. Rachel loves language and wants to be an editor, and Riley, who is an artist who makes glass mosaics, is going to California so that he can learn and grow while working at his craft. The book often sounded like a fairy tale to me, but it was also a strange mixture of fairy tale and reality and I liked it, it felt very whimsical. However, at the same time, I thought that the basic premise of the story did not feel very convincing.

“But the tick of their clock seemed sharp and stern today. They were seventeen now, almost grown. They’d kept secrets from each other, heavy things they couldn’t hold much longer. The windows were open and the outside world sent in breezes of unfamiliar smells and the low distant hoot of a passenger train. The boy and girl forced happy pictures in their heads, dreamed of faraway places that called their names. They didn’t hear the old floorboards creak in new places, like the spine of a well-loved storybook about to crack in half.”

As the blurb above hints, neither of them wanted to admit that they were in love (I got the impression that Rachel was more resistant than Riley, but Riley tried to follow along), but then their parents take them to a weird seminar called DERT where they eat, um, truth cupcakes and reveal their deepest secrets. And here we go, now both of them are aware that they love each other.

Luckily, on the way out from this strange event (or they think that it was luck) they meet a person who promises to help them get rid of their mutual attraction. They just need to do a six-step program, (although they will actually do only four steps because steps five and six are too extreme, often with unintended consequences, and therefore are not recommended).

Rachel and Riley agree to participate in the program but then strange things keep happening. When they have to write essays about what they see in the other person, they end up writing about the same things. During one of the steps they are supposed to fall asleep and wake up liking each other less, but instead they see each other in their dreams. The program is clearly not working, so when they are done with Step Four Riley suggests that before they leave home they try out properly being in love instead of fighting their attraction. They’ve tried to fight it and been unsuccessful, so why not try the opposite?

But Rachel is very stubborn and she wants keep going, all the way to the risky steps five and six. I will leave you to imagine the consequences of her choices. Don’t worry, she is not portrayed like a villain or anything, but I wanted to slap her and hard, I won’t deny that.

There is a happy ending in the book, or as much as there can be for two seventeen-year-olds experiencing their first love (which may stay with them forever or may turn into a deep friendship in the years ahead). There is no explicit sex in the book, but there is one very tame description of an intimate scene which I thought was one of the best I’ve read in years as far as tame descriptions are concerned. And it was not just about sex of course, it was also about love.

“They took in the secrets their clothes had kept from each other. Riley’s chest hair looked awkwardly self-trimmed to Rachel, and this was the sweetest thing she could have imagined. Rachel’s chest was flatter than Riley had envisioned, and one breast was slightly bigger than the other. It looked good on her. She looked like a huntress on an urn. “I’m ridiculously nervous,” he said. “Why? It’s just me.” “There’s no such thing as ‘just you.’” His eyes raked over her body. “Not anymore.” She looked away, reddening. “So how do we start?” she whispered. They didn’t have answers. So for the next fifteen minutes, they stole things. They cribbed from every story they’d watched or read together and then thought about alone in their own beds at night, their hands slipping quietly under the blankets. They tried sweet teen-soap-opera kisses, experimental art-film kisses, slow deep literary kisses that came wrapped in words like molten and lush. Riley borrowed the finesse of Brawley Hawk in Outlaw Unknown, the way he’d trail his rough hand from north to south to get the sexy spy to give up her secrets. Rachel nicked some moves from Queen Vesuvia in Winterthorne Avenged, the chapter where she undid the rival king’s breeches as if she were ripping parchment. When it was time for the foil packet in Riley’s shirt, they followed the steps from the AV room’s ancient sex-ed film and almost ruined everything by laughing, because the busty old lady with the condom banana was ridiculous, and so was sex, if you thought about it. But then they stopped thinking about it. They stopped thinking and talking and pretending, and they moved together on the frayed white towels in the shadow of the shimmering wave mosaic, until the pieces of other stories blurred into a new one that was just them. “I love you,” said Rachel. “I love you,” said Riley. It was over too soon”

I thought it was sweet and funny and I liked it a lot. Although I have to admit that at times when I was reading I was afraid I would fall into a sugar coma – there was almost too much sweet in this story for me.