REVIEW: Wake Unto Me by Lisa Cach 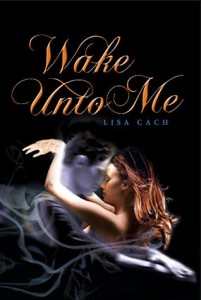 You are an author I keep an eye out for and when I saw that there would be a new novel from you after a bit of a wait, I felt a frisson of anticipation. I’ve loved to liked several of your previous books and have admired the risks you’ve taken and the different plots you’ve devised. I will admit to a slight let down when I saw that “Wake Unto Me” is a PNR YA since I don’t usually do PNR and rarely read YA but, hey it’s a Cach so I was in.

“Caitlyn Monahan knows she belongs somewhere else. It’s what her dead mother’s note suggested, and it’s what her recurring nightmares allude to. Desperate to flee these terrifying dreams—and her small town—she accepts a spot at a boarding school in France. Only, when she arrives, her nightmares get worse.

But then there are her amazing dreams, so vivid and so real, with visits from an alluring, mysterious, and gorgeous Italian boy from the 1500s. Caitlyn knows they are soul mates, but how can she be in love with someone who exists only in her dreams?

Then, as her reality and dream world collide, Caitlyn searches for the real reason why she was brought to this school. And what she discovers will change her life forever.”

Since I don’t read a lot of books in this genre, I’m coming to it without many preconceived notions and without knowledge of a lot of the tropes. Which I’m sure is going to color my viewpoint of it differently than if I were an old pro at PNR YA.

There’s a lot of standard teenage stuff here – fitting in at school, making friends in a new place, missteps with the opposite sex, cattiness and envy but also scenes of Caitlyn finding her way with the language, the food and the mysteries of English tack. She’s a bit of a fish out of water and it takes her a while to find her feet but eventually Caitlyn finds a coterie of friends – which turns out to be handy later on. Unfortunately, most of these friends merely serve to help Caitlyn rather than being more independent characters.

Even though I don’t read that much YA, some of the tropes are ones I recognize or have seen mentioned in other DA reviews – lack of parenting/parent present during story, Caitlyn vs adults – in the form of Madam Snowe, Caitlyn growing up and, in a way, past her family as she accepts and understands her differences from them. I also knew to be looking for how dark the story would get – which is not dystopian dark but poor Caitlyn does suffer from horrible dreams with screaming banshees and heartbreak when she feels she’s lost her chance at happiness due to the death of her true love.

The beginning of the book shows a Secret Sisterhood which then takes a hike for a large section of the book until they’re needed in the final act. Since I have a low tolerance for Secret Societies and Conspiracy Theory type stuff, I was actually glad they retreated to the background and, TBH, I finished the book still uncertain of exactly what the goal or plan or reason for their existence is.

I reached a surfeit of vampires years ago and have never been interested in shifters so the PNR utilized made me a happy bunny. Dream visitations, banshees – or screamers as you have Caitlyn call them – plus a cool twist on a centuries old ghost kept my attention. The puzzle solving was a neat journey through historical details with Caitlyn contributing as much as Raphael.

I wish there had been more romance in the book and some of Raphael’s POV. But the short initial glimpses of Raphael served to whet my appetite until he entered more of the story in the second half. I thought I had figured out how he and Caitlyn would be reunited but agree with a friend of mine that this sort of resolution is less satisfying to me and slightly creepy.

I ended up liking “Wake Unto Me” even though I was left with an unfinished feeling. Because of that, I hope that this is the beginning of a series as there are many unanswered questions I have. Readers who’ve liked your books before or those searching for something different from the standard paranormal creatures might be the best intended audience but those looking for a deep romance probably won’t. B-