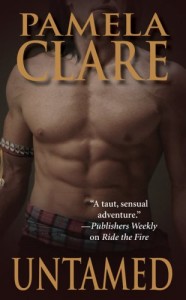 After Michael Mann made the French and Indian Wars sexy, a few authors began to use this mainly forgotten episode in North American history. However, you’ve taken it to a whole new level by using it for not only one but two historical series. Brava you!

Major Morgan MacKinnon knows that, even desperately wounded, he’ll live long enough for the French who’ve captured him to try to beat information out of him. After all, he and his Rangers have bedeviled the French and their allies for years now with superior woodland and soldiering skills. A chance to extract vital details from him about the Rangers and their British overlords will not only be militarily beneficial but also an opportunity for a little revenge. But it will take more than the French can dish out for Morgan to break. He’ll never betray his brothers in arms.

Yet he wouldn’t be human if his blood didn’t run cold at the thought of what the French commander plans to do with him after the interrogation. The Abenaki, one of France’s Indian allies, have long hungered for revenge for the attack the Rangers carried out against an Abenaki village. And as the French gleefully tell Morgan, he’ll feed the fires – literally – of Abenaki hatred. His only option to avoid a fate worse than death is to tell General Bourlemaque what he wants to know and then the commander will see to it that Morgan, a Catholic Highlander, is given last rites and killed quickly. Some choice.

Which is why Morgan refuses it until Amalie Chauvenet, the young metisse daughter of a now dead French officer, offers Bourlemaque the key to turning Morgan. After he tells the lovely woman who nursed him back to health about how he and his brothers were forced to fight for the British even though their historical loyalty was to the French allies of the Highlanders dispossessed after the failed Rebellion of ’45, she sees the opportunity for Bourlemaque to enlist Morgan for the French. He can then fight for a Catholic king and thumb his nose at the British officer who blackmailed him into the service of England. For Morgan it’s a chance for life. But only if he can keep the French from realizing the double game he’s embarked on.

“Untamed” is a bit of a throw back to the historical novels of yesteryear. It’s longer than many books published lately and uses a different setting. It’s packed with historical details which add to the feel of the story and features some genuine conflicts and long term consequences. The hero is noble in thought, word and deed so the dilemma he faces is truly agonizing for him. The heroine has real reasons to initially hate him since he and his men were responsible for the death of her father and did do the deed – though they had their reasons – for which the Abenaki seek revenge.

War is ugly and we see that in full throughout the book. Spying is something that most men of the age thought abhorrent and we see that too. Violence is real and always lurking to snatch those who aren’t strong enough or wily enough to escape it. Life is rough during this book and you don’t sugar coat that. As Morgan says, the frontier is a hard place, especially on the women.
Even though the rest of the review is going to state what I didn’t like or that bothered me, keep these two paragraphs in mind to explain my final grade. Okay on to what bugged me.

Enough with the heroine’s hair! In case someone misses the 23 references to it, let me say the heroine has long, beautiful, wavy hair. This doesn’t change over the course of the book and no one’s opinion of it changes so I’m mystified as to the reason to be told again and again about it. Same with Morgan’s height and the size of his arms. He’s big all over and I say that with both a straight face and a smirk.

As for the Rangers, I couldn’t help thinking of them as full sized dwarfs as they walked with Amalie and Morgan away from the fight with the Abenaki. They’re just so sweet and bashful towards Snow White – ah, sorry – Amalie. However, I did enjoy the male comradeship complete with the wounded Ranger Morgan’s trying to carry while under fire from the French yelling to him, “You run like a lass! Can you no’ go faster?”

How is it that Lady Anne has acquired a Highland brogue? I can see a little vocal assimilation over the course of her marriage but sheesh, she sounds like a wee Highland lassie now. And why would she have lost her title of Lady? As the daughter of an Earl, wouldn’t she carry it for life no matter who she married?

I will admit to skimming almost all the love scenes. I’ve read them countless times before in other books and after reading one here, saw that they would offer nothing new.

The middle section of the book sagged a bit after Morgan had started playing his double crossing game with Bourlamaque. Lots of his and hers lusting, tons of scenes of Amalie shedding her innocence as she’s awakened to the flames of passion, lots of smoldering hate with Rillieux – who was basically nothing but a puppet villain though I was happy that once he was out of the book, there was no chance of him suddenly showing up again to cause one last conflict.

Och, the Highland brogue. There isna a page of the book wi’out it. Something I kenned early on. Those who cannae stand it will either hafta put up wi’ it or bail out early. But I did learn several interesting new Gaelic words such as how to call someone a whoreson. “Macdiolian” for those who want a new curse word for their vocabulary. Never let it be said romance books aren’t instructive.

Why is it that all heroes of the French and Indian Wars books have to look like Daniel Day Lewis? Complete with long, dark braided hair, blue arm tattoos and buckskin clothes? Please God, give me a blond hero someday.

But at least there’re real conflicts going on here. Morgan is faced with a horrible death or betraying his brothers and brothers in arms. He also sees what life could be for him serving under the command of an officer he respects and also one who is Catholic. By books end, he is torn at the thought of either losing Amalie or taking her with him into a life on the run from both sides.

No doubt Connor will have his story in due time yet I can’t help but want to see Lord William Wentworth brought to his knees by some strong woman. I await either or both with intense interest. Thanks for not leaving us hanging with this series. B

This book can be purchased in mass market from Amazon or ebook format (Kindle only as far as I can see).