REVIEW: To Desire a Devil by Elizabeth Hoyt

Okay people, listen up. This is the last book in the series and the whole thing is a spoiler for the first three books. You have been warned. 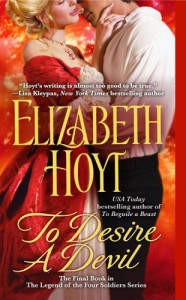 Capturing my attention for an entire series before I’ve even read the first book is something. Me remembering that a new book in a series is coming out without having someone remind me of it is something. Keeping my attention and enthusiasm for a series all the way into book four is something. So don’t be bummed that the grade for this one is lower than most of the others.

At last, here we are at the final book of the series when the bombshell, which was hurled at us in the preview included at the end of the previous book, explodes. For the length of the other three books and all during the seven years since the horrible events at Spinners Falls in the Colonies, everyone has known that Captain Lord Reynaud Hope, heir the Earldom of Blanchard, is dead. The pitifully few fellow Englishmen taken with him as captives by the Indian allies of the French saw poor Reynaud die. Two years later, his father died in England and the Earldom passed on to a distant relative, Reginald St. Aubyn who now lives with his niece, Beatrice Corning, as his hostess.

The boring tea being held by the Earl for his political cronies becomes less boring, in fact it becomes the talk of London, when Reynaud bursts into the room looking like a savage himself. And suddenly, right in the same house with her, lives the man with whom Beatrice fell in love when she and her uncle moved into Blanchard house and Beatrice first saw the portrait of Reynaud which hangs in the blue salon.

Only the man himself is nothing like she imagined. Gone is the laughing young man who left with his fellow soldiers for America. In his stead is a man who frightens half of London with his sometimes crazed behavior and who terrifies the one man who never thought his traitorous deeds would be uncovered. Is Reynaud a man who can find some tenderness and love in his heart for this woman who now loves him as he is instead of as how she dreamt he was? Or will the traitor finish what was started seven years ago before Reynaud is able to rediscover how to love?

Perhaps this book suffers somewhat from the “Devilish” syndrome wherein readers eagerly await a final book with a promised hero who then must live up to impossible standards. Perhaps it was the balance of the story which felt somewhat off to me. Maybe I wasn’t completely convinced of the hero’s sudden capitulation into headlong love for his heroine, who has already committed her heart to him by the middle of the story. I’m not sure what is the cause but I ended this book feeling somewhat let down.

Beatrice is a lovely heroine who compliments the other strong heroines she follows. She’s practical but with a romantic streak. She wants to believe that romance survives matrimony despite the unexpected “thud” sound she hears that heralds the letdown a dear friend is experiencing with her own marriage. Beatrice has been courted a little but no man has ever lived up to the dream she’s embroidered in her head about Reynaud. Yet, when the man himself doesn’t live up to her fantasy, she takes stock, really looks at her feelings and admits that she’s fallen for him as he is. She pushes for him to reveal to her parts of his captivity so that she’ll know him better. She doesn’t shrink from his grimness nor make excuses for him nor patronize him with empty platitudes. She wonders if her love alone will be enough for the two of them and she’s willing to accept this if that’s how it will be. In other words, she isn’t a missish weakling.

Reynaud is tortured, literally so as we learn throughout the course of the novel. He’s withstood seven years of hell by the overriding desire to get home. He’s been changed by his experience, as are all men who’ve survived war, and will never be the carefree man he was. If he had not been written with lingering effects, I would have cried foul. That he is resistant to anything which might weaken him, even if he might not be aware of that, is logical. He avoided the things which could have tied him to his Indian captors – marriage and children – and initially he avoids the deeper feelings which he might develop for Beatrice. His decision to marry is based on what it could gain him in other respects rather than for any tender feelings.

I was going to say that as with Hartley, Reynaud is too alpha for my tastes. He pays lip service to Beatrice’s wants too often. However, in his defense, I will allow that managing to live through what he did would probably turn almost anyone into an alpha just to survive. But if he’d come at me the night after taking my virginity and told me that I didn’t have enough experience with sex to know if I really wanted it again that night or not, I’d have told him, “Dude, you don’t know my knee well enough to know how it’s going to feel when I ram it up between your legs. But I’d be happy to let you find out.”

It takes too many outside influences to push Reynaud towards love. First Beatrice’s friend, Jeremy Oates, who is himself a broken survivor of war, has to extract a promise from Reynaud to take care of Beatrice when, up to then, all Reynaud can think when he sees Beatrice is “mine!” Then when the traitor makes his move and uses Beatrice as a pawn – and haven’t we seen too much of that already in this series? – suddenly, WHAM! Reynaud’s iron hard shell cracks and it’s love. Usually I enjoy watching how the fairy tale chapter headers mirror the action in the book but the heavy handed “bang me over the head with it” true love which has the strength to conquer the Goblin King (read traitor) ending of this one almost made me snicker.

I will say that I enjoyed watching Munroe and Hartley effectively spike the guns which were aimed at the bill which Beatrice and Lottie had worked so tirelessly for. It doesn’t take grand gestures to effect change, just smart ones. I wished that the subplot involving Lottie and Nate had got more resolution instead of the half baked “feel good” ending which didn’t seem to deal with the deeper issues which had caused them to separate. The outing of the traitor of Spinner’s Falls also fell flat for me. I had wanted all the information we had to be tied together somehow and the identity to be a “WOW, I should have seen this!” moment for me. Instead I felt cheated by the sleight of hand.

I wanted to finish this series with a bang. I wanted to close the book and feel replete, sated, emotionally spent – but in a good way. I felt a mild dose of these things but not the whole hog experience I was longing for. Don’t get me wrong, it is a good book. I enjoyed it and seeing Reynaud and Beatrice find their HEA but it’s not quite the book I was hoping for. B-

This book can be purchased at Amazon. The book will be available in ebook form on November 1 which is either the official release date or a way for publishers to punish you ebook readers.

→ Jayne
Previous article: REVIEW & Giveaway: Queen of Song and Souls by CL Wilson
Next Post: Poll: Reading in the Bathroom