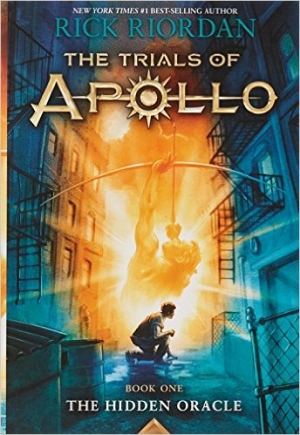 How do you punish an immortal?

By making him human.

After angering his father Zeus, the god Apollo is cast down from Olympus. Weak and disoriented, he lands in New York City as a regular teenage boy. Now, without his godly powers, the four-thousand-year-old deity must learn to survive in the modern world until he can somehow find a way to regain Zeus’s favor.

But Apollo has many enemies-gods, monsters, and mortals who would love to see the former Olympian permanently destroyed. Apollo needs help, and he can think of only one place to go . . . an enclave of modern demigods known as Camp Half-Blood.

I enjoyed your Percy Jackson series, which I picked up when I was looking for another Harry Potter story and which seemed to follow a similar formula (a seemingly ordinary boy discovers that he has to follow an extraordinary destiny and save the world). The character seemed cool and his adventures were based on Greek mythology, which I have loved since I was a kid. I kind of got tired of the never-ending adventure, and I fell couple of books behind in the “Heroes of Olympus” books, where Percy played one of the main roles alongside other kids/teenaged demigods (for those who do not know – child of God and mortal). I had every intention of finishing the series but never did.

But then I came across this book and I saw the name of Apollo, one of my favorite Greek Gods, in the title. I started reading reviews and saw that some readers were shocked, *shocked* that Rick Riordan’s narrator in this book (who is Apollo himself, never mind that he is temporarily turned into a mortal teenager by Zeus) is bisexual. Apollo being bisexual means that he fondly remembers that he loved Daphne *and* Hyacinthus and many other women and men, not that he is engaged in sex with anyone right now, mind you. There was also reader outrage about Nico getting a boyfriend. Remember Nico, who admitted to crushing on Percy in “Heroes of Olympus”? Yes, it was the same Nico, son of Hades and a kid for whom I wanted happiness so badly.

So of course I bought the book. I am always delighted to see when mainstream books feature LGBT couple and I was even more delighted that LGBT kids who like reading about Greek gods in modern times have the chance to see a character who reminds them of themselves in some ways.

As the blurb indicates, we meet Apollo when he appears in New York, weak and disoriented, not quite remembering why Zeus cast him out or what he needs to do to get back in daddy’s favor.

I have been very impressed, throughout this series, by how well Rick Riordan handles Greek Gods and the whole Greek mythos while transferring it to modern times. The Gods retain their personalities while adjusting to living in modern days in most hilarious ways, and the familiar characters  from Greek mythos somehow seem quite at home in modern America.

Take Apollo, for example. He has always been vain and selfish (of course, he is not the only Olympian who has these character traits in abundance, but Apollo stands out for me as one of the most memorable ones).

Apollo retains that vanity when we meet him in this book:

“Even for a god of poetry such as myself, it is difficult to describe how I felt. How could you – a mere mortal – possibly understand?”

After getting into a dangerous fight on the streets of New York and after getting unexpected help from a stranger, Apollo realizes that he needs to go and see Percy Jackson, [the star of the previous series] who has so far played a small role in this book, I do not know if his role will increase in the next installments, but looks like this is mostly Apollo’s quest so far.

I think readers can start here without having read the previous books in the series. It seems to be deliberately written so that you can treat this as a standalone, but the author tempts you to go back and reread. Past events are mentioned and quite a few characters from past books are present, but even though I was a couple of books behind I was not confused.

“If I didn’t know how much Percy Jackson adored me, I would have sworn he was about to punch me in my already – broken nose”

Percy helps Apollo and his friend get to Camp Half Blood, but of course their problems do not stop once they get in the camp. There are many dangerous things happening in the Camp and of course Apollo finds himself right in the middle of those things. Apollo is used to other people doing work for him, but him taking direct action the situation will not improve. And we also learn about new/old villains lurking in the darkness.

I liked the adventure, the humor, the pages packed with references to Greek mythology, which all were somehow relevant to the story, but I was the most impressed with Apollo’s character growth. He expresses regret and guilt and even some generosity of spirit, but his vanity does not disappear and I was happy about that, because he still needs to be recognizable as Apollo.

And another aside, Nico and his boyfriend were adorable.