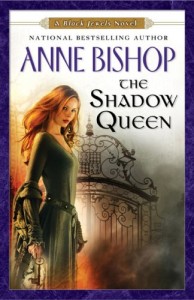 While your other novels have been hit or miss (mostly miss) for me, I’m a longtime fan of your Black Jewel books. I discovered them at a time when I was about to give up on the fantasy genre and because they rekindled my love for a genre I’d become disenchanted with at the time, they’ll always hold a special place in my heart.

The Shadow Queen starts two years after the end of the original Black Jewels trilogy, in which Jaenelle cleansed the world of the tainted Blood (witches, for those unfamiliar with the series) who were on the verge of destroying it. Dena Nehele is a territory in Terreille that’s suffered over the centuries. It was one of the last territories to fall under the control of the evil Dorothea and Hekatah and as a result, they and their followers made sure to demolish whatever resistance was left when it finally fell into their grasp. This meant breaking the Blood who presented the most threat and killing those they couldn’t break. Because of this, no witches were left when Jaenelle’s storm passed through since only the corrupted remained.

Theran Grayhaven is the last, direct descendant of the last, uncorrupted witch to rule Dena Nehele. He desperately wants to restore his home but to do so, he needs a Queen to lead it. There are a couple obstacles in his path. First, what potential Queens they have are far too young and they can’t wait that long. And secondly, after centuries of corruption, no one actually knows the ways in which the Blood are supposed to live. Left with no choice, he asks Daemon Sadi to help him find a Queen. Daemon is understandably reluctant; he doesn’t particularly like Theran and he doesn’t want to “loan” one of Kaeleer’s Queens to them. But he knew and liked Theran’s ancestors (the main characters from The Invisible Ring) so out of respect for them, he asks Jaenelle what her thoughts are. Lucky for Theran, she has a suggestion.

Lady Cassidy comes from a poor, low-ranking Blood family. Due to a twist of fate, she was born a Queen. She even had her own court. Unfortunately, her entire court recently deserted her for a younger, flashier Queen. It’s humiliating, and a part of her blames herself. After all, she’s not powerful, pretty, or ambitious. But Jaenelle believes she’s the perfect Queen to heal Dena Nehele. Unlucky for Cassidy, the one hundred warlord princes of the land share the same opinion as her previous court so she must prove to them, and herself, that she can rule and teach them what it means to be Blood.

What I immediately liked about this book is that it’s the first since The Invisible Ring not to focus exclusively on Jaenelle and her boys. Some readers might not like that, but I certainly do. We’ve read enough stories about Jaenelle and her boys; it’d be nice to read about other characters too. (I’m still holding out for a book about Karla!) I also admit Jaenelle’s not one of my favorite characters since I consider her a canon Mary Sue. So I liked it even more that the main female character is Cassidy, a Queen who’s not powerful at all and whose confidence has been shaken since her court deserted her. It was very refreshing to see that not all the Blood are crazy powerful and that not all Queens immediately find a Court that loves and adores them at first glance.

It was also nice to go back to Terreille. Since most of the Black Jewel novels focus on Jaenelle and her boys, they’re usually set in Kaeleer or Hell. I’ve been curious for a while to see the repercussions of the war on Terreille since that was the realm most influenced by Dorothea and Hekatah. Understandably, it was a complete mess. With the Blood decimated by Jaenelle’s storm, the survivors fell victim to the landen (non-supernatural people) who’d finally grown sick and tired of being abused by the Blood. Of course, they had no way of knowing that the Blood they were killing were the good ones and to be honest, they wouldn’t have been able to tell the difference since the surviving Blood retaliated against this new threat to their lives. In such a situation, probably the only Queen who could wade through the mess is Cassidy. Anyone more powerful would cause a panic among the landen.

Of course, that’s not what Theran and his one hundred warlord princes want. They’ve been fighting for a long time so they’re tired and bitter. They want someone shiny, which is the exact opposite of Cassidy. I’ll be honest and say I didn’t care for Theran, but I understood why he felt the way he did. I also think his attitude is a reflection of the corruption that pervaded the world before Jaenelle’s coming. He’s not tainted in the same way Dorothea and her witches were, but he’s not entirely free of its influence on certain ways of thinking. After all, if you grow up thinking witches are evil and want to break you, you probably wouldn’t have a good opinion of women. What I did like about Theran though was that he showed how not all warlord princes immediately fall to their knees before a Queen. I would never call him likeable, but I think his motivations and attitudes are understandable.

What I would have liked to see more of were interactions between Cassidy and Gray, Theran’s cousin. Gray was kidnapped by Dorothea’s witches when he was fifteen and broken in their “tender, loving” care. He was rescued after a couple years but the damage was already done. Gray would have been the best warlord prince to come out of Dena Nehele in generations. Instead, he’s emotionally, mentally and psychologically scarred, not quite right in the head, and more reminiscent of a young boy than a grown man. It’s Cassidy who leads him on the path to healing but since the damage done to him was so severe, I just would have liked to see more of him moving forward. I like the idea of Cassidy and Gray as a couple (older heroine/younger hero, my fellow readers!) but at the same time, I’m a bit squicked since for much of the book, Gray gives the impression of being much younger than he actually is.

Now for what detracted from my enjoyment. One of the themes of the books is how the damage wrought by Dorothea’s corruption leaves scars that last a long time. Mirroring Gray, we have Daemon who spent centuries as a sex slave and during that time, created a sort of different personality called the Sadist. Daemon hates that part of himself and never wants to be that way again, but he’s triggered and his acting as the Sadist with Jaenelle has repercussions on their relationship. While I appreciated that this topic was addressed, I can’t help but feel it’s a bit late. Shouldn’t this issue have come up between Jaenelle and Daemon before?

The other subplot involves Saetan and is a continuation of a story introduced in the Black Jewels collection, Dreams Made Flesh. I’m rather ambivalent about it, although I think people who haven’t read the collection might be confused as to where this storyline came from. The fact that it didn’t come up until near the end of the book didn’t help matters any.

All in all, I liked this book. I just wish it would have focused solely on Cassidy and her time in Dena Nehele. We’ve had so many books about Jaenelle and her boys already. There’s no reason why they need to take over a book supposedly about someone else. I think I would have liked it more had they played true supporting roles the same way Daemon did in The Invisible Ring. As it was, I thought they hijacked the book at some points — particularly towards the end when I was more invested in Cassidy and her struggles. Still, Black Jewel fans won’t want to miss this installment which offers a different look on the realms of the Blood. B