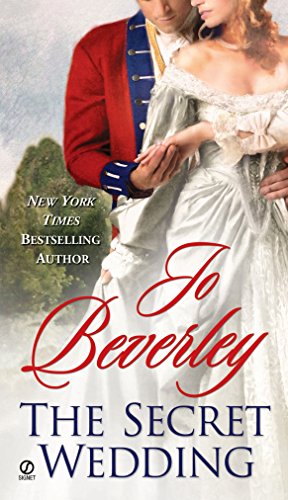 You keep writing these Georgian novels and I can guarantee I’ll keep reading them. Witty, historically well researched, filled with characters I want to root for. Yep, I’m happy. But why did the release information that accompanied the book say it’s a Regency?

Ten years ago young Lieutenant Christian Hill tries to do the right thing. And ends up in a duel during which he kills his opponent. This causes him to nearly be strung up for murder before fate, in the form of a local tradeswoman who could strike fear into lesser men, intervenes and offers him the chance at life. If he’s willing to marry the ruined young woman he fought for in the first place.

To save himself, Christian agrees but he insists on some form of marriage contract and holds an ace up his sleeve by giving a false name. Since he’s on his way to the Americas to fight, he might be killed anyway and even if he survives he doubts the marriage is legal.

Now it’s a decade later and he’s the heir to his father, an earl due to second son roundabout inheritance. News that someone is asking around the regiment for Jack Hill, the false name he used, leads him to begin to question the letter he got telling him his bride had died. A hasty confab with his childhood friend and foster brother, Thorn, makes him determined to discover if his wife is alive and if the marriage is valid.

Caro Hill has her own reasons for wanting to be sure the letter she got saying Jack Hill had died gloriously in the service of King and country is true. She can’t very well accept a proposal of marriage until she’s sure. But when a man suddenly appears asking for her, she ducks and hides.

In the interim since that dreadful day, her father’s business has prospered and Caro has no intention of letting Jack, if he lives, or Jack’s family, if he doesn’t live, swoop in and take it all due to the laws giving a man total control of his wife’s property.

Until she’s sure about the situation, she decides to beard the lion, go undercover and investigate this man who might be the key to discovering if she’s wife or widow. Meanwhile, Christian decides to enjoy the company of this mysterious woman he meets. Until fate takes another swipe at them and sends them on a road trip across Yorkshire that might end in true love after all.

So we get a road romance x second chance at love x misunderstandings with a dollop of Mallorens tossed in. I can totally understand Caro’s reluctance to hand her inheritance over to Christian or any other man to do with as he wishes. Women of the age – including Diana who is a Countess in her own right – had such little true control over their lives or property.

Also it’s a nice change to have a hero be a little bit poor and have to deal with that in a society where money and show accounts for so much. Christian isn’t dirt poor but he’s got to watch his money. The Hardwicke Act, which serves as a valuable part of the plot, saves Thorn from having to worry about money grubbing misses after his position and wealth.

Christian is a military man so it makes sense that he can quickly summarize the situation after the ring theft and move to get Caro out of danger. That he can adapt a disguise and that he’d have the chutzpah to dive right back into the mob. As he says, Caro isn’t used to such things so her adaptability is a bonus.

The cat stuff is cute but I’m not sure of its purpose beyond cute. Unless it’s to show how country people of the time, without access to the Internet, believed what they were told.

“Fearsome Froggat” with a Yorkshire accent that could grind corn. I loved the regional details here. The differing accents that Caro (in the South) and Christian (in Yorkshire) had trouble understanding and mimicking. How Phyllis uses the Yorkshire distrust of Southerners to keep her servants from gossiping about her friend Caro. Christian’s attempts to remember the name of the town in which the story started were hilarious. Nether Greasebutt, indeed!

Christian and his man Barleyman have a great period relationship. Respect but no chummy BFFs nonsense. Also, the scenes with the Mallorens and their servants – again there’s respect but they are servants and expected to serve. Diana also shows her realistic awareness that even though the Mallorens respect and pay their servants well, some gossiping will go on.

One thing niggled at my mind. Caro had a terrible introduction to physical love. Yet the first time she and Christian are intimate – that doesn’t seem to bother her. It’s only later, while fleeing the mob and Christian attempts to provide a cover for why they’re sitting out behind a building that her memories assail her. And that’s the last we hear of this from her POV. There are a few token references to it from Diana but Caro appears over her experience quite quickly.

Thanks for including even a little time for Christian and Caro to get (re)aquainted after discovering who the other really is before making any lifelong choices. Yes, they are married for good (especially after the consummation) but there were other choices rather than living together. The information about the separation a mensa et thoro. was interesting. I would assume this was a real life option. I also enjoyed how you worked the information about the Hardwicke Act into the story.

As in previous books, we see the power that Rothgar wields and his noblesse oblige by taking Caro under his protection while in York even though he doesn’t really know her. For once we see that all things are not (quite) possible for a Malloren. Caro and Christian are married and there’s nothing under the law that can be done about it. But Rothgar can throw his weight around, as at ball, and in polite society by spreading information that they wish to be disseminated. I think Christian and Caro will be glad of his friends-in-law comment.

I love that Christian jokes that Caro is staying with him because she loves his family. I love his family. We can see that he’s been raised right (while he was at home and not with Thorn) and that they raised Thorn right (disciplining him for sheep incident whether he’s a Duke or not) while he was with them.

But we can also see how he would think he’s being slightly smothered since he was with Thorn for so long. And it’s so true about his comment that in the military, others respected his privacy which he doesn’t have at home. Ditto how he is chagrined that the family prayed for him each night while he was fighting in America while he didn’t spare them much time in his thoughts. Well, he was in his late teens and thought it all a lark.

I like the scene with Christian and his father discussing the secret wedding and how his father 1) sees the good deed that Christian did, 2) doesn’t berate him for what can’t be changed 3) doesn’t load guilt on Christian’s head for losing the chance to bring money into the family and 4) applauds Christian for doing the right thing in regard to Caro’s money.

I had to laugh at Christian and his mother talking about marriage and life. There’s nothing like hearing your mother talk about sex to shake your day. The scene later when Caro and Christian meet with them and are basically told – in a polite English manner – to go start trying to have children was funny too.

In their case, I agree with Caro that I’d be damned before paying any money to the Fowl Flock for Christian’s bet.

All in all, I enjoyed “The Secret Wedding” very much. The focus of the story stays on Christian and Caro but with a brief glimpse of some previous characters as well as a slight preview of Thorn. I can’t wait to see who snags him. And we get a new saying, “With the Hills, things always turn out for the best.” B